How to Fake a Hate Crime and Get Away With It

“Why did Jussie Smollett do it?” a thousand anxiously clueless progressives ask.

To paraphrase Willie Sutton, because that’s where the money is. 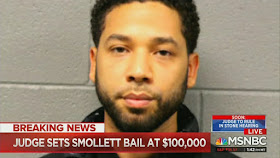 Just ask Khalil Cavil, a Texas waiter, who raised a thousand bucks off a fake note that he wrote
himself, "We don't tip terrorist."

"I want people to understand that this racism, and this hatred still exists," he claimed.

There have been multiple cases in recent years of waiters and waitresses faking racist notes and then scoring thousands in online donations for their pain and suffering before the hoax gets exposed.

A thousand bucks for a waiter equates to the millions that an actor hoped to make from a fake hate crime. The offense is the same, the social justice banks you’re robbing just get bigger for celebrities.

But so do the stakes.

Jussie Smollett’s mistake wasn’t faking a hate crime. It wasn’t even getting caught. (Most hate crime hoaxes are outed sooner or later.)

It was being stupid.

A waiter scrawling, “We Hate Black People” on a check, going to the media and then collecting donations is a lot safer than faking an assault in a city with more security cameras than ethics.

Jussie broke the first rule of hate crime hoaxes. He filed a police report. At that point the stunt he might have been able to pass off as a social justice art project became a crime.

That’s what he was arrested for.

College hate crime hoaxers usually don’t file police reports. If they do, it’s to the campus cops who generally do the first part of their job and discover it’s a hoax, and then do the second part of their job and cover it up. Local cops in campus towns also often shrug and the perps walk away with no charges.

Had Jussie Smollett staged a hate crime hoax at the University of Iowa, where a student claimed that he was assaulted by three white men shouting racial slurs, he would have also gotten a pass.

Marcus Owens, the students, faced no charges so that the “community can begin to heal”. The University statement said, “We will continue to reach out to everyone involved, including Marcus, in order to provide support and assistance.”

Iowa City police Capt. Troy Kelsay suggested that he hoped that Marcus "learned a lesson from it."

The lesson is obvious. Stage fake hate crimes in Iowa City. If you don’t get caught, you win. If you do get caught, nothing will happen to you.

Capt. Troy Kelsay and Johnson County Attorney Janet Lyness are extremely white and servicing an area that Hillary Clinton won by 65%. They know that their job is to condescendingly pat minority hate crime hoaxers on the head and thank them for starting an important conversation about racism.

Chicago is 45% white and 33% black. It has an actual police force with a history and an ethos that isn’t just there to pat drunken students on the head and keep the gownies away from the townies.

The worst possible place to fake a hate crime is in an African-American city. Black cops don’t suffer from white guilt and have very little patience for fake racist hate crimes. Chicago’s top law enforcement officials are African-American. That’s one reason Smollett is getting the book thrown at him.

He might have checked with Fynn Ajani Arthur at Goucher College who came down from Maine and decided to fake racist graffiti in Baltimore County. Artie blamed bottled up anger. The police charged him with property destruction and a hate crime.

Hate crime hoaxes are most likely to lead to criminal charges in more diverse areas with more professional police forces. If Jussie Smollett had wanted to successfully fake a hate crime, he should have gone to a lily-white leftist suburb with a police force whose main job is social justice.

The best place in America to fake a hate crime is still a campus. That’s why hate crime hoaxes occur most frequently on college campuses where they’re usually treated as victimless crimes.

Trying the same stunt in Chicago, New York or Baltimore is a bad idea.

The NYPD or the Chicago cops might not bother following up if your phone was stolen or if you were mugged on the way to work. But media coverage of a hate crime puts pressure on the cops to break the case. And they have the equipment and the training to solve the crime. They also have access to the ten trillion cameras dotting every city. And they’ll find the time to actually do more with that footage than just send out an alert with some blurry footage and move on to the next crime they don’t have time for.

And there’s nothing those cops, many of them minorities, hated more than knowing that they’re ignoring violent assaults by the dozen to pore over some celebrity’s minor assault that’s really a hoax.

The cops investigating Smollett’s lie knew exactly how many bleeding mugging victims sitting all night in an ER they had to brush off to figure out if someone had threatened a pampered celebrity.

They had a good idea from the start that it was a hoax. They were working the case to protect their own reputations, always endangered in a lefty activist city, and to nail the bastard who put them in that bind.

And they got their man.

It’s not surprising that a celebrity would have executed a hate crime hoax. The primary motivation for hate crime hoaxes is political narcissism. The average hate crime hoaxer is a college student in his late teens or early twenties whose campus radicalism and sense of alienation collide in self-dramatization.

The fake hate crime is the outcome of an internal conflict given a false political context by campus radicalization. Radical ideologies and cults structure individual emotional turmoil in terms of their own larger struggles. Emotionally unstable students are brainwashed to perceive their own conflicts as expressions of identity politics struggles against ‘whiteness’ or ‘heteronormativity’.

Jussie is over a decade older than the usual hate crime hoaxer, but he shared the political narcissism and the erratic emotions of the younger students who usually perpetrate these crimes.

But there’s also the financial angle.

Smollett’s mistake was forgetting that ‘hate crime’ has a crime in it. And an extremely unnecessary one.

In a social justice age of microaggressions and facecrimes where a lefty activist can gain nationwide fame for accusing a teenage boy in a red cap of smirking at him, an actual assault was never necessary.

Smollett’s error was the classic mistake of all bad actors. He overplayed the part.

All Jussie really had to do was track down a Trump supporter somewhere and claim that he was smirked at. The same media that spent tubs of ink analyzing the skin movements around the mouth area of a teenage Catholic boy at a pro-life rally would have been happy to anoint Jussie a victim of facecrime.

And who needs fake crimes when you have facecrimes?

Microaggressions make it possible to fake hate crimes that exist only in the perpetrator’s head. External evidence of political incorrectness, such as a MAGA hat or racial differences, do all the rest.

The best way to fake a hate crime isn’t with bleach and a noose. It’s to claim that the experience of the hate crime is “your truth”. That it exists not in the realm of fact and evidence that any professional police department can take apart in a matter of days, but in the orifices of your traumatized psyche.

There is no claim of emotional racial trauma too farfetched for the modern political establishment.

Under Obama, the National Park Service had hired an outreach guy who claimed that black people weren’t visiting parks because they have ancestral memories of being lynched on trees.

It’s stupid, but there’s no way short of common sense to actually disprove something in your head.

Actors may live in their heads, but celebrities, as Jussie Smollett aspired to be, live in front of mirrors. It wasn’t enough for him to invent a hate crime. As a method actor, he had to physically live it out. And, maybe, like method actors, once he experienced it, he was actually able to believe that it was true.

Leftists believe in lots of things that don’t exist and aren’t true. Like universal health care and green trains to Hawaii. They believe in them, as all cult members do, because they feel like the right thing.

And there’s no harm in believing stupid and wrong things, as long as you don’t try to make them real.

Jussie Smollett’s mistake, like that of Rep. Alexandria Ocasio Cortez, another millennial political narcissist, was trying to realize the fantasies that made him feel important. As long as his “truths” were inside his head, they couldn’t be challenged, and he could rant against President Trump all he liked.

Leftist problems begin when they try to realize their fantasies.

That’s what California found out with high speed rail, Vermont found out with socialized medicine and Rep. Alexandria Ocasio Cortez found out when the Green New Deal actually had to exist on paper.

Leftism is a beautiful fantasy that becomes a nightmarish reality. What starts out with equality, ends with gulags, what begins with a green vision becomes a war on cows, and what commences with a passionate cry for social justice ends with two Nigerians pouring bleach on you in Chicago.

Like the commissars of the Soviet Union, Noam Chomsky in Cambodia and Steven Spielberg in Cuba, Jussie Smollett had finally found a truth he could believe in, even as everyone else learned it was a lie.

Thank you for reading.
Daniel Greenfield at February 27, 2019
Share