The Puerto Rican Genocide That Wasn't

The Mayor of San Juan recently took a break from her tour of every cable news network on the planet to text an accusation of genocide aimed at President Trump.

"WE WILL NOT BE LEFT TO DIE,” Mayor Carmen Yulin Cruz texted. “I ask the United Nations, UNICEF and the world to stand with the people of Puerto Rico and stop the genocide.”

The death toll in Puerto Rico currently stands at 48. 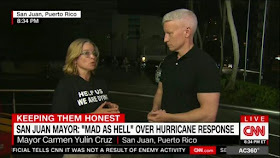 Despite media arm waving, with only 117 people not accounted for, the actual death toll in Puerto Rico isn’t likely to rise very much. And even a death toll of 48 was only achieved by listing people who died of heart attacks and other medical problems that could not be treated because of hurricane damage. It’s unknown whether some of them might have lived without the hurricane. It’s guesswork.

The previous, incomplete death toll showed that the actual hurricane seemed to have only killed 19 people. 2 suicides were also attributed to the hurricane. As were respiratory failures “indirectly linked” to the hurricane.

But the media has been working hard to inflate the death toll.

Some media accounts fantasize about hundreds of bodies piling up in morgues. How many of those deaths are due to the hurricane and how many to the ordinary course of disease and crime? (Puerto Rico has higher crime rates and mortality rates for many diseases than the United States.)

Congresswoman Nydia Velasquez sent a letter to the Department of Homeland Security implying that the "true death toll" is being underreported to "portray relief efforts as more successful than they are".

Velasquez demanded a Federal audit of the local authorities with findings to be delivered in 10 days.

The numbers just aren’t high enough. It’s hard to have a genocide with only 48 people.

And that’s the real agenda.

Velasquez and the Washington Post aren’t trying to help Puerto Rico by raising the death toll. Instead they want a higher death toll because it gives them ammo for their attacks on President Trump.

To have a proper death toll, you need it to be hundreds. Or even better yet, in the thousands.

A genocide of 48 people makes Mayor Carmen Yulin Cruz parading around in her “WE ARE DYING” t-shirt for Anderson Cooper look silly. 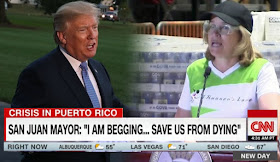 “We are dying,” the left-wing politician warned on CNN on September 29. These days, she’s warning of some sort of future genocide that will eventually come about due to “the lack of appropriate action of a president that just does not get it.” Weeks later, the genocide has yet to materialize.

The House passed a $36.5 billion disaster relief package, most of which will go to Puerto Rico. Both President Trump and Speaker Ryan came to see the disaster firsthand. Meanwhile there are constant accusations that local politicians and their supporters are stealing relief supplies.

Puerto Rico has major political, social and economic problems that have nothing to do with the hurricane. If President Hillary Clinton were guzzling chardonnay in the White House in between delivering cross presidential addresses about the vital importance of gun control and socialized medicine, Hurricane Maria would have been a passing story in the press.

Hurricane Georges and Tropical Storm Jeanne took out power and water in much the same way as Maria. After Georges, President Clinton didn’t visit Puerto Rico. Hillary Clinton did.

Why did Hillary visit Puerto Rico?

Less than six months later, Hillary’s Senate campaign had begun creaking to life. New York has a large Puerto Rican population. Instead of paying a presidential visit, Bill sent his wife to kickstart her political campaign by exploiting a natural disaster. It’s unsurprising that Hillary attempted to politicize the latest natural disaster in Puerto Rico. That’s just what she soullessly does.

And it’s what the left does.

Their standards are now so low that 48 people dying in a natural disaster qualifies as a genocide.

But this was never about Puerto Rico. Hurricane Maria, like the Las Vegas shootings, was one of many backdrops whose only purpose is political posturing.

The left doesn’t care about Puerto Rico. It’s only sad that more Puerto Ricans didn’t die so that their corpses could be exploited for more partisan political attacks until the next shiny object comes along.

Meanwhile in San Juan, Mayor Carmen Yulin Cruz is still waiting for the genocide while exploring the limits of the local t-shirt printing place whose proprietors are apparently the only survivors.

Them and the guys who have to blow dry Anderson Cooper’s pants each time he gingerly descends down to the waist into the water so that the viewers at home can be properly horrified and impressed.

Puerto Rico is a tragedy, but it’s not a genocide.

The fake news narrative has come apart. The death toll isn’t there. And as the repair crews do their work, as the power comes on, the roads are cleared and drinking water is restored, normalcy will come back. There may be attempts to inflate the death toll by attributing assorted deaths to the storm on dubious grounds. But even then the end result will fall far short of the left’s genocidal fantasies.

But by then the left will have moved on. There will be more shootings to link to gun control or another natural disaster to link to global warming. Any attempts to impose a reality check on the Iran Deal or action against North Korea’s nuclear weapons program will be met with alarmism about nuclear war. 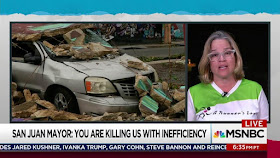 The left will always have something to freak out about. Even now, Harvey Weinstein’s grotesque bulk has pushed Puerto Rico and its genocide off the front pages. And the media is already, with unerring inevitability, trying to clumsily connect the crimes of the top Dem donor to President Trump.

But that is just how the media works. Disaster + Trump = Story. That’s the formula for everything.

The Great Media Puerto Rican Genocide of 2017 didn’t pan out. But neither did Katrina. There will always be another story, another lie, another scandal and another thousand hit pieces wrapped around it. For a brief moment, the cameras of the media turned on Puerto Rico. And even now, they’re turning away. Eventually all the reporters will depart leaving behind only their luggage tags and mango aftershave. The warm wind will blow through their empty rooms and stir their stained bedsheets.

And Mayor Carmen Yulin Cruz will sit surrounded by t-shirt mementos that remind her of the time when everyone knew her name.