Attack of the 90 Foot Islamic Virgins

Ibrahim Barda'aya had turned 54 and he was still single so he decided to go out and kill some Jews. But Ibrahim wasn’t just a violent anti-Semitic racist. He was also lonely. According to his Imam, he wanted to die and get his 72 virgins in the afterlife. And he had stayed single to avoid the temptations of earthly women so that he could enjoy the virgins who are 90 feet tall and so “white” that you can see the “marrow of their bones”.

In Pakistan, an arrested suicide bomber last year when asked if he wanted to marry, retorted that he wanted to die. “72 virgins are waiting for me in paradise, so why I should prefer only one here?”

Muslim men are encouraged to view their marriages to Muslim women as temporary. A Hadith has the Houri virgin admonishing the Muslim wife, “Do not annoy him, may Allah ruin you. He is with you as a passing guest. Very soon, he will part with you and come to us.”

According to Saudi cleric Muhammad Al-Munajid, the 90-foot-tall Islamic virgins are vastly preferable to actual Muslim women. “Whereas the women of this world may suffer, for days and nights, from menstruation, from blood for 40 days after childbirth, from vaginal bleeding and from diseases – the women of Paradise are pure, unblemished, menstruation-free, free of feces, urine, phlegm, children.” This is the Islamic understanding of the relationship between men and women.

Also they are “restricted to tents” and “locked up” so, like the ideal Saudi woman, they never leave the house. They are “hairless” and never get older than their “tender age”. Their skin is so “bright that it causes confusion” and actually doubles as a mirror so that “one can see one’s image in her cheek”.

Unsurprisingly for a death cult, Islamic scholars appear to be obsessed with the bones of these giant women and assure Jihadists that "the marrow of the bones of their legs” of their promised virgin brides “will be seen through the bones and the flesh”.

If you’re keeping track, these are 90-foot-tall women with blindingly bright transparent skin, visible bones and no biological functions who stay locked up in the house all the time. This is what the highest aspiration of the Islamic faith looks like. Aside from the bizarre qualities, Islamic paradise is a fantasy version of Saudi Arabia or ISIS where women are property. And the 90-foot-tall virgins, unlike real women, never protest, run away or commit suicide.

Of course 72 virgins is just a starting point for the aspiring mass murdering Muslim terrorist. 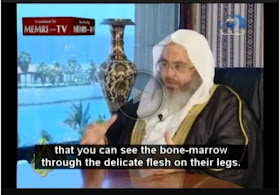 According to Saudi cleric Muhammad Ali Shanqiti, each 90-foot-tall virgin comes with 70 servant girls. Also for those Muslim men who insist on marrying earthly women instead of going straight to the Jihad, polygamists get 70 giant transparent bright virgins for every wife they have.

No sooner does the Muslim man have his reunion with his wife than, according to Muhammad, a black-eyed virgin calls to you from above: "Oh servant of Allah, don't we get a piece of you?"

That apparently comes out to a total of 19,604 women. But Muhammad may be selling the martyr short. According to the Deputy Speaker of the Palestinian Legislative Council, Sheik Ahmad Bahr, there are 500 gates in Islamic paradise and each of them has “5,000 black-eyed virgins. Brothers, 500 multiplied by 5,000 is 2.5 million.”

Why should a Muslim Jihadist settle for the mere pittance of 19,604 women being offered by the Saudis when he can get 2.5 million transparent 90-foot-tall virgins from Hamas? But what happens when ISIS ups the ante to 10 million and the Taliban counter with 200 million?

This becomes a problem for Muslim women since Muslim religious leaders don’t seem too happy with the idea of human women in Islamic paradise. Mohammed, the original founder of Islam, claimed, “I was shown the Hell-fire and that the majority of its dwellers are women.”

That frees up Muslim men to leave behind their wives in hell for the millions of transparent 90-foot-tall virgins waiting for them in paradise.

Imam Abu Mu'adh Al-Dardiri of Egypt elaborates that, “Out of every 100 dwellers of Hell, 30 are men and 70 are women. In other words, for every three men in Hell there are seven women.” 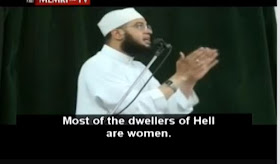 Saudi Sheikh Yahya Al-Jana reassures Muslim men worried that actual human women might ruin their paradise that, “There are not so many women in Paradise. It is mostly men who enter Paradise.”

Mohammed, the original one, urged his followers not to waste time thinking about their wives in paradise. “By Allah, a man will have a hundred virgins in a single morning,” the notorious rapist vowed.

Also the Prophet of Islam assured his followers of the superiority of the virgins of “tender age” to human women. “Each time he returns to one of them, he will find that she is a virgin again… not like the women in this world, whose hymen is ruptured once, and that's it.” Unlike Saudi Arabia or the Islamic State, there’s no need for costly restoration surgery.

Sheikh Al-Jana urges Muslim men to stop thinking about human women and focus on the virgins. “Where are you, lovers of women? Where are you, you desire these virgins? How many people have lost their promised virgins for the sake of one unveiled whore?” he exhorts. “Allah even mentioned sex, in order to make you lust for Paradise… women who are nothing like those you meet in this world.”

None of this appears terribly flattering to Muslim women who are just meant to pull kitchen duty on earth before heading to hell while their husbands go off to the trillions of transparent virgins of paradise who, on account of their transparent bone marrow, are nothing like Muslim women on earth.

Still some Muslim women, from this world, have tried to get to paradise the hard way through murdering non-Muslims, to meet the Muslim men who have gone chasing after the 90-foot virgins.

Two female Muslim terrorists in Israel claimed that they carried out an attack so that they could die and meet the “many handsome male terrorists” whose pictures Hamas and Fatah show off after each terrorist attack. But they’re in for a tough time in Muslim paradise no matter how many Jews they kill.

On reaching Islamic paradise, they would have to compete for attention with the 90-foot-tall virgins with mirror skin who might accidentally step on them and squash them. And the handsome Muslim “martyrs” are only there because they obeyed the instructions of Islamic preachers to stop “chasing the women of this world” who occasionally are so immodest as to leave their tents and go grocery shopping. 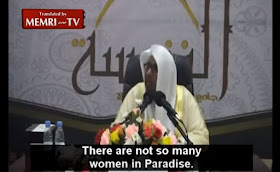 But a differing Hadith suggests that instead of getting 72, 19,604 or 2.5 million giant virgins, Muslims only get two. The other 70 women will be “his inheritance from the people of the Hell-Fire”. In plain English that means men who go to hell will have their wives and daughters passed along to Muslim men in paradise.

Much like the way that Mohammed conquered and killed non-Muslims and then gave away their wives and daughters as property to his followers, or the way that ISIS enslaved and distributed Yazidi women to its Jihadists, Islamic paradise is supposed to function as an ISIS-style rape camp for women.

If Islamic paradise were a real place, the women who reached it would find themselves distributed to Jihadists in much the same way that the Muslim runaway teenage girls who joined ISIS were.

Islamic paradise is hell for women. Much as Islamic utopias on earth are nightmares for women.

Muslim terrorists chant, “You love life, we love death.” The virgin Houri is the physical embodiment of the love of death. The death cult urges on Muslims to lust for death rather than for life. Muslim men are taught to despise life and to view marriage to Muslim women as a temporary expedient for the sake of the Jihad. Life and family are a means to an end. And the end is death.

The 90-foot-tall transparent creature with visible bone marrow and none of the functions of life is a giant skeleton. The love that Muslim terrorists have for it is a love for death.

ISIS is recreating the Islamic paradise on earth by capturing and handing out girls of “tender age” to the Jihadists. It forces them to take contraceptives and conducts forced abortions so that, like the 72 virgins, the captured girls will never actually have children. It even conducts reconstruction surgery after the rapes so that their victims will more closely resemble the eternal virgins of Islamic paradise.

The Islamic State isn’t just Islamic. It’s a hellish attempt to create an Islamic heaven on earth.
Daniel Greenfield at May 04, 2016
Share