The Curse of Cain

After Cain killed his brother, the Lord told him, "A fugitive and a wanderer shalt thou be in the earth." 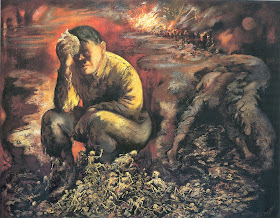 But the natural order has been reversed, instead the Abels, if they survive, become homeless
wanderers and the Cains build their Caliphates on the tombs of their victims.

"Cursed shall you be from the earth," the Lord said, and so it has been.

The earth under their feet may be cursed, it yields nothing but sand and thistles, but they are nomads, forgetting agriculture, remembering only their tradecraft of murder. They become worshipers of death dreaming of the green verdant fields of paradise which they can reach only if they kill enough men, women and children.

Leaving devastation behind them, dead lands, lost cultures, widows and orphans, they claw their way up to heaven on a ladder of bones.

Everything around them dies until the only green is on their flags. They are cursed from the earth and they curse the earth. Where they go, the world dies.

It is not murder that makes it impossible for Abel to live with Cain says the State Department, says the European Union and says the New York Times. It is Abel's fields and houses that provoke Cain.

The PLO formed a unity government with Hamas and the loud voice of consensus, the voice of men who imagine that they become god when they speak in a single voice, is that it was the Israeli houses that were to blame. It is not Cain's fault that he kills. It is Abel's fault that he builds.

Of the three kidnapped and murdered boys, two Israeli and one American, Jodi Rudoren of the New York Times wrote, "Palestinians... see the very act of attending (school) yeshiva in a West Bank settlement as provocation."

Cain sows fields of corpses of the innocent for the Lord and he still does not understand why his sacrifice is not accepted and why the earth he dwells on is cursed.

Abel does his best to appease Cain with gifts of earth, but the earth is useless to Cain. What good is cursed earth to cursed men? What can a man plant in the desert? What can he harvest when everything dies at his touch? All he can offer is a harvest of death. 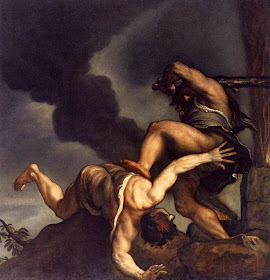 That is what he brings to the faintly remembered Creator he calls Allah. From Iraq to Iran, from Kuwait to Saudi Arabia, from Nigeria to Somalia, from Pakistan to Indonesia, he holds up human heads and cries, "Allahu Akbar."

As if G-d needs such petty proofs of superiority.

Cain cannot be appeased with earth. The earth is his curse. All that lives hates him and he hates all that lives. He tortures animals and raises dead crops. He kills his daughters and sisters, his mother, the source of his life and the source of his future, for the same honor that made Cain the first killer.

There is no use negotiating with Cain. There is no compromise that he will accept. Cain is his own curse. He loves death and that is all he will ever have. His acolytes cry, "We love death, you love life."

There is no room for Cain anywhere. Where he remains there will be death and suffering. He will kill because it is all he can do. He has nothing else to offer the world, his own kind or the Creator.

The curse of the earth that he brings can only be lifted when he is removed from it. Only when Cain is driven out, will the land come into its fullness, will the people know peace and will the shadow lift from the valleys, mountains, rivers and cities of the land.

Cain seeks sympathy in his wanderings. With bloody hands, he pleads his case. Every one of his victims made him do it. From the east to the west and the north to the south, they all started it.

He kills from one end of the world to the next and it is never his fault. Each time, each Abel did it.

That is why the Lord put the mark of the killer on Cain's forehead. All were meant to know what Cain was and to move him along, prevent him from settling down, becoming offended and killing over his long lost honor, and then beginning a war that would lead to his own death and the deaths of others.

Cain was not to be killed. It was no use killing him because all men have a little Cain in them. The curse of Cain infects in many forms. Nazism, Communism and Islam are only a few examples of the disease. Instead Cain was meant to be a living example of the futility of evil. His accursed nature made him into a living symbol of death. Each thing he touched would be cursed by his existence.

When we remember what Cain is, when we know what his signs, the swastika, the sickle and the crescent, represent, then he is no threat to us.

We move him onward, we cast him out and drive him away before he kills us and we kill him and the cycle of bloodshed that he starts everywhere he goes begins again.

It is when we forget that he becomes truly dangerous. When Abel and Cain cannot be told apart, then Cain can pretend that he is the victim and that Abel was the killer. The blood soaks into the earth and he washes his hands of it and pretends that he knows nothing about it. Men begin playing detectives, they search for the root cause of Cain's crimes and try to understand what provoked him this time.

But even when the Lord does not speak to men, the blood can still be heard crying from the earth. A thousand years of blood, the blood of men, women and children from every race and every part of the world.

Cain has made a mountain of corpses. His Caliphate was built on bones. His code is cruelty and his holy book is written in blood on the flayed skins of his murdered victims.

A thousand years of blood calls from the earth. The cries of peoples long vanished from the earth warn us that we will either drive out Cain or his curse will fill our lands with blood and dust and all that we love and all that we have worked for will die at his cursed touch.
Daniel Greenfield at June 30, 2014
Share