Will a Rogue General Undo Obama's Regime Change in Libya?

It didn't take Egypt very long to revert back to a military oligarchy with elections. That oligarchy wasn't brought back by an armed coup in the dead of night, but by popular protests. 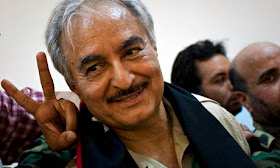 The Arab Spring was trumpeted by liberals as a new era in the history of the Middle East. But the Middle East is better at undoing history than the media is at writing it.

In Egypt, General Abdel Fattah el-Sisi brushed away the effects of the Arab Spring. Now in Libya, General Khalifa Hifter is set to undo Obama's military intervention which put the Muslim Brotherhood on the road to taking over Libya, as they had taken over Egypt.

Forty-five years ago a group of officers led by Colonel Muammar Gaddafi seized control of Libya. Gaddafi enjoyed support from the military and Federalist opponents of a central government. And the rest is history, except that history in the Middle East repeats like a broken record.

Now Khalifa Hifter, a former Colonel (his post-Gaddafi rank is higher and disputed), is leading another military coup while vowing to free Libya of chaos, instability and corruption. Like Gaddafi, Hifter focused on Benghazi and Tripoli. His forces pounded Islamic militias in Benghazi, including those responsible for the murder of four Americans, and seized the parliament in Tripoli.

Hifter, who has spent a long time living in the United States, claims to have American support, but his real support probably comes from the east.

Like Gaddafi, Hifter is supported by the military and the Federalists. However he isn't fighting a weak monarchy, but the Muslim Brotherhood, Al Qaeda and other Islamist militias. But like Gaddafi, his takeover was probably inspired by Egypt and possibly even planned out by Egypt.

Egypt's new government, which overthrew the Muslim Brotherhood, can't risk allowing the group to control a bordering country and one of the largest oil reserves in Africa. Gaddafi used Libya's oil wealth to fuel his insanity and fund terrorism. The Muslim Brotherhood would funnel it into pursuing its program of regional and global takeovers and the Islamic militias that control much of Libya would become a problem for Egypt.

Egypt's immediate security agenda is to control border instability fed by the Muslim Brotherhood in Gaza and Sinai. It would only be natural for Egypt's new rulers to turn their attention to their country’s large western border with Libya.

When he released a video calling for a change of power, General Hifter appeared marginalized and isolated. Now he has powerful financial, military and tribal allies. And many ordinary Libyans see him as a possible alternative to the random brutality of militia rule, of which the Benghazi attack that killed four Americans was just one example, the collapsing governments and the threat that the simmering civil war which never really ended might heat up until the bloodshed becomes as extreme as anything in Syria.

The Syrian Civil War is also Hifter’s best asset and greatest threat. The conflict called away many Jihadis who had originally fought in Libya, but if that unholy war collapses and there isn't a more appealing conflict waiting in the wings, they may drift back to Libya to fight its military. Al Qaeda has training camps in Libya and the Islamic militias are doing well, but they may not have the numbers to take on General Hifter’s forces. And with Syria and Egypt consuming the energy and attention span of Jihadis worldwide, this may be Libya's only chance to beat them.

Even though Hifter is stepping into the slot occupied by Gaddafi, it doesn't mean that he is another Gaddafi. 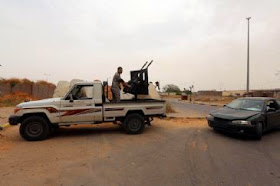 General Hifter had close links to the United States and the CIA. In the Middle East that doesn't mean much, but he is less likely to share Gaddafi's resentment of the UK or his demented flavor of Socialism. Gaddafi had the same relationship to Egypt as Kim Jong Il did to the People's Republic of China. Like China, Egypt thought it was getting a smaller version of its own rulers; instead it got an insane maniac who couldn’t be controlled by anyone including his backers.

This time Egypt may actually get what it wants; a stable Libya under military officers who, like their Egyptian counterparts, are less interested in revolution and more interested in the good life. In the best case scenario, the generals may stabilize Libya. If they don't, Libya will wait for a strongman to finally get the job done.

The question is whether General Hifter can get the job done.

The Muslim Brotherhood's roots in Libya have always been weak. Unlike Egypt, it hasn't done too well at straight elections and has been obligated to resort to political machinations. It got the Libyan Islamic Fighting Group to switch its orientation from Al Qaeda to the Brotherhood long enough for Gaddafi to set them loose and for them to help overthrow him. But that left the Brotherhood dependent on Islamic militias with unstable allegiances and a hunger for power.

That hasn't worked too well for the Muslim Brotherhood in Syria where its influence has been swamped by Al Qaeda. The Brotherhood is a parasite that depends on a facsimile of civilization even as it works to destroy it. Post-Gaddafi Libya is closer to Syria than to Egypt, its tribal links are more powerful than political slogans and even religion.

If Libya's generals can win quickly, the Muslim Brotherhood's hopes of getting its greasy hands on the country's oil wealth will go the way of its brief time ruling Egypt. If they can't, then Libya may go the way of Syria. The Libyan military was known as a joke under Gaddafi and its performance during the Libyan Civil War didn't do much to impress anyone.

And there is the Obama card.

General Hifter claims American support, but it's doubtful that he has anything except maybe a few leftover contacts in the CIA. The Arab Spring was never about democracy, it was about convincing Islamists to pursue their Caliphate dreams through political elections, instead of suicide bombings. Hifter, like Al-Sisi, is upsetting that particular apple cart and the vendors of its sour fruit in Washington and Brussels won't thank him for it.

But Al-Sisi also demonstrated that Obama is too weak to be worth fearing. Despite his support for the Muslim Brotherhood, Obama was forced to accept a new Egypt. And, after kicking and screaming, even provide it with military aid. Hifter is gambling that Obama won't turn to a second unpopular military intervention in the Middle East and will accept a fait accompli.

Especially if it turns out to have been backed by Saudi Arabia.

Egypt was meant to be a model for the revolutions of the Arab Spring, but instead it became a counterrevolutionary model. Even if Egypt isn't behind Hifter, the general obviously drew inspiration from what the Egyptian military did to a much more powerful Muslim Brotherhood regime. And he also drew inspiration from Obama's inability to meaningfully respond to it 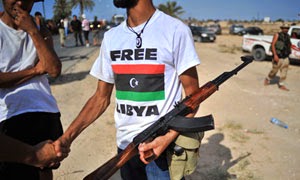 We should be wary of embracing either Al-Sisi or Hifter. They are at most only the enemies of our enemy, but they also appear to have a narrower scope of ambition and less interest, by the standards of the region, in engaging in international terrorism or waging a war against the West.  Stabilizing Libya will reduce terrorism and limit the flow of refugees spilling into Europe.

The media will pay little attention as the last dregs of the Arab Spring slide into the gutter. It will have little to say about Obama's illegal Libyan intervention, except to mock Republicans for trying to find out the truth about the chain of bad decisions that led to the murder of four Americans. Like Obama, the pundits and talking heads will learn little humility from the swiftness with which the Middle East erased their new era of history from history.

And that is why they have nothing to say about the Middle East worth listening to. They never understood the region. Their political agenda for it is big on empty slogans that reflect a reality that exists only in their own minds. They thought that their plans for the region were set in stone. Instead they were writing on sand. The wind has blown across the desert and their plans have blown away with it.
Daniel Greenfield at May 24, 2014
Share