In real life, terrorists are almost always Muslim. In the movie theater, they are anything but. America's fictional secret agents, covert operatives and rogue cops who play by their own rules have spent more time battling Serbian terrorists than Muslim terrorists. 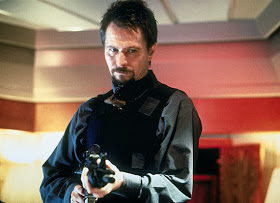 Before September 11 broke up the party, 24's Jack Bauer was fighting the international menace of Serbian terrorism. Serbian terrorists also showed up in 1999's Diplomatic Siege when their "Serbian Liberation Front" took over a US embassy and in 1997's The Peacemaker with George Clooney rushing to stop a Serb from detonating a nuke in New York City.

The United States has remained unscathed by Serbian terrorism, though the same can't be said for Peter Weller, the star of Diplomatic Siege, and Mimi Leder, the director of The Peacemaker, but not by Muslim terrorist attacks. Despite September 11, the Fort Hood Massacre and the Boston Marathon bombings, Hollywood has however resolutely kept its eye on the real threat.

This weekend, Ride Along, which features Ice "F___ the Police" Cube playing a cop, knocked Lone Survivor out of the top spot at the box office, and once again takes on the terrible threat of… Serbian terrorism.

When the Serbs aren't available, the North Koreans have to step in. Red Dawn had to switch its army of invaders who conquer America from the Chinese to the North Koreans. North Korea, unlike China, doesn't pay Hollywood studios money for the movies it imports. But to be on the safe side, when North Koreans attacked the White House in Olympus Has Fallen, the movie specified that they were extremists. Hollywood wouldn't want to imply that North Korea's moderate government might be attacking America.

Only the Serbs do that.

North Korea however responded by warning that if it did attack the United States, the outcome would be even worse than anything in a movie.

When the Serbs are too busy shoveling snow and the North Koreans are too busy watching Dennis Rodman act like an idiot, there are always the Russians. The Russians are more likely to show up as villains after the fall of the Soviet Union than during the Communist era. It's as if the end of Soviet Communism finally set Hollywood free to join in the fun of Boris and Natasha villains without any of the guilt about red-baiting.

When Jack Ryan: Shadow Recruit featured a terrorist cell in Dearborn, even though Muslim settlers dominate the area, the villains were shown operating out of a Russian Orthodox church and getting their cues from a priest reading the bible while the terrorists cried out, “Slava Bogu" or "Praise God."

It would have been so very unrealistic to show them praising Allah instead.

Jack Ryan: Shadow Recruit is the latest attempt at making a Tom Clancy movie without the Tom Clancy part. Sum of All Fears, one of the first movies about terrorism to come out after September 11, jettisoned Clancy's Muslim villains and replaced them with neo-fascists out to turn Europe into a "united fascist superstate".

While this wasn't true to the Clancy novel, it was the first time that a major motion picture unintentionally portrayed the European Union as a villain even though it had already been around for a decade. Around the time Sum of All Fears came out, Europeans were already on a single currency. But that obviously wasn't what anyone in the production had in mind.

Its writer Dan Pyne dismissed Islamic terrorism as a "cliche"; even though a plot can’t be a cliche when it never appears in movies, only in real life. Pyne however found a more realistic villain. "I think, there was some neo-nationalist activity in Holland, and there was stuff going on in Spain and in Italy. So it seemed like a logical and lasting idea that would be universal."

Nothing is more universal than the threat of neo-nationalists in Holland. Dutch neo-nationalism is an enduring world menace that everyone can relate to.

The neo-nationalists of the Netherlands that Pyne had discovered in a used copy of the LA Times were probably Pim Fortuyn's party. Fortuyn was a gay Sociology professor and former Marxist who favored drug legalization, gay marriage and less Muslim immigration. The neo-nationalist threat of the Netherlands did not prove lasting when around the time that Sum of All Fears was playing in theaters; Fortuyn was murdered by a leftist who, like Pyne, worried about the plight of the Muslims.

In an even bigger cliche, Theo van Gogh, who had just finished directing May 6th, a movie about the assassination of Pim Fortuyn, was murdered by Mohammed Bouyeri, a Muslim immigrant from Morocco who told the victim's mother that he could have no empathy for her because she was a non-Muslim.

It was the sort of ridiculous cliche that Dan Pyne would never have put into a script.

Instead Dan Pyne went on to write a remake of the Manchurian Candidate in which Communist China was replaced by the "Manchurian Corporation". He's currently working on a movie featuring a Syrian rescue worker who gets mistaken for a terrorist while trying to save lives during Hurricane Katrina.

It's a cliche, but it's the kind of cliche that Hollywood likes.

If a movie is made about September 11 a decade from, now, the villains will probably be Serbian nationalists. Or perhaps a villainous "September 11 Corporation". It would be a cliche to have 19 Muslim hijackers murder 3,000 people. And then the camera will linger meaningfully on a Muslim rescuer wrongly taken into custody by a bigoted NYPD cop who is overlooking the real Serbian/Dutch neo-nationalist corporate villains.

But the Serbians, Russians, North Koreans and the Neo-Nationalists of the Netherlands are only the understudies who get called in when the usual villains, right-wing extremists who want to false flag America into a war with the Muslims are on vacation.

After 24 got done with the Serbian terror threat, it defaulted to the real threat of government warmongers trying to fake a Muslim terror threat. After 9/11, 24's second season’s story was about an evil government conspiracy to fake a Muslim terrorist attack. Anything else would have been a cliche. And to avoid cliches, the series used variations of the same plot in three seasons.

When the Serbs went on strike last year, White House Down brought in a villainous Speaker of the House with a Jewish last name to assassinate a black president in order to sabotage his treaty with Iran. The movie lost so much money that Sony blamed its quarterly $197 million loss on it.

When a straightforward presentation flops, Hollywood finds ways of embedding the same old message into more fantastic fare. Last summer, Iron Man 3, Star Trek Into Darkness and the Lone Ranger all had minor variations of the same story about false flag attacks that were orchestrated by governments or powerful interests connected to them. This Trutherism explosion was just another case of Hollywood carefully avoiding cliches.

Nowhere in all these tales of evil corporations and governments is there a movie about an entertainment industry so intertwined with government that it not only helped pick the country’s current leader, but it constantly releases propaganda films attempting to revise reality according to his worldview. That would be a cliché; much like the idea of that industry filming false flag movies depicting the favorite villains of the Clinton Administration carrying out ridiculously implausible acts of terror to retroactively justify its focus on the Serbs instead of Al Qaeda.

Hollywood stands as firmly against depicting Muslim terrorism as Hollywood Communists after the Hitler-Stalin pact did against anti-Nazi films. If they had been positioned further up the ladder back then, instead of mainly being relegated to writing scripts, we would no doubt have a catalog of movies featuring Yankee warmongers plotting to stage fake Nazi attacks on America.

Hollywood's ideological hostility to reality however has not proven to be very profitable. 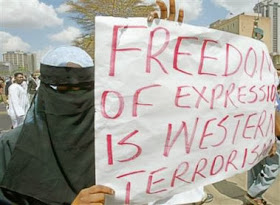 The Peacemaker, a movie written and co-produced by the Cockburns, whose politics are slightly to the left of Stalin and who wrote a book blaming Israel for everything wrong with the world beginning with the death of the dinosaurs, was the inaugural feature from the failed Spielberg-Geffen-Katzenberg Dreamworks studio and disappointed critics and audiences. The Cockburns would never try their hand at film fiction again unless you count American Casino, their "documentary" about the financial collapse, which had a financial collapse of its own with an opening weekend of $1,397.

Sum of All Fears, the movie inspired by the Netherlands neo-nationalist threat, was the weakest performer of the Tom Clancy movies when accounting for ticket price inflation and full budget. And it still had a much better opening weekend than Jack Ryan: Shadow Recruit.

But failure hasn't stopped Hollywood from churning out anti-war movies and it won't stop it from alerting the nation to the terrorist threat lurking in Orthodox Churches or the Dutch neo-nationalists trying to nuke our cities. Hollywood’s  handpicked leaders were the ones who made the country vulnerable to Islamic terrorism and their industry has gone on covering up for them with movies in which the villains can be anyone and everyone except the real killers.
Daniel Greenfield at January 28, 2014
Share