The Central Planning Solution to Evil

We are not a violent society. We are a society sheltered from violence. No one in Rwanda spends  time wondering what kind of man would murder people. They probably live next door to him. If your neighborhood is diverse enough, you might be unfortunate enough to live next door to war criminals all the way from Eastern Europe to Africa. 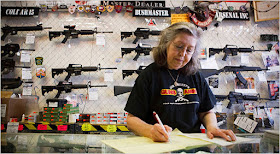 Guns are how we misspell evil. Guns are how we avoid talking about the ugly realities of human nature while building sandcastles on the shores of utopia.

It's not about the fear of what one motivated maniac can do in a crowded place, but about the precariousness of liberal social control that the killing sprees imply.

The gun issue is about solving individual evil through central planning in a shelter big enough for everyone. A Gun Free Zone where everyone is a target and tries to live under the illusion that they aren't. A society where everyone is drawing peace signs on colored notepaper while waiting under their desks for the bomb to fall.

That brand of control isn't authority, it's authority in panic mode believing that if it imposes total zero tolerance control then there will be no more shootings. And every time the dumb paradigm is blown to bits with another shotgun, then the rush is on to reinforce it with more total zero control tolerance.
Zero tolerance for the Second Amendment makes sense. If you ban all guns, except for those in the hands of the 708,000 police officers, some of the 1.5 million members of the armed forces, the  security guards at armored cars and banks, the bodyguards of celebrities who call for gun control,  and any of the other people who need a gun to do their job, then you're sure to stop all shootings.

So long as none of those millions of people, or their tens of millions of kids, spouses, parents, grandchildren, girlfriends, boyfriends, roommates and anyone else who has access to them and their living spaces, carries out one of those shootings.

But this isn't really about stopping shootings; it's about the belief that the problem isn't evil, but agency, that if we make sure that everyone who has guns is following government orders, then control will be asserted and the problem will stop.

It's the central planning solution to evil.

There was no individual agency, just agencies. There were orders to run guns to Mexico and the cartel gunmen who killed people had orders to shoot. There was nothing random or unpredictable about it.

Gun control is the assertion that the problem is not the guns; it's the lack of central planning for shooting people. It's the individual. 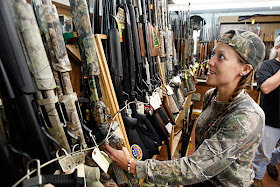 Moral agency is individual. You can't outsource it to a government and you wouldn't want to.

The bundle of impulses, the codes of character, the concepts of right and wrong, take place at the level of the individual.

Organizations do not sanctify this process. They do not lift it above its fallacies or do a very good job of keeping sociopaths and murderers from rising high enough to give orders.

Gun control does not control guns, it gives the illusion of controlling people, and when it fails those in authority are able to say that they did everything that they could short of giving people the ability to defend themselves.

We live under the rule of organizers, community and otherwise, committed to bringing their perfect state into being through the absolute control over people, and the violent acts of lone madmen are a reminder that such control is fleeting and that attempting to control a problem often makes it worse by removing the natural human crowdsourced responses that would otherwise come into play.

People do kill people and the only way to stop that is by killing them first. To a utopian this is a moral paradox that invalidates everything that came before it, but to everyone else, it's just life in a world where evil is a reality, not just a word.

Anyone who really hankers after a world without guns would do well to try the 12th Century which was not a nicer place for lack of guns. The same firepower that makes it possible for one homicidal maniac to kill a dozen unarmed people also makes it that much harder to recreate a world where a single family can rule over millions and one man in armor can terrify hundreds of peasants.

Putting miniature cannons in the hands of every peasant made the American Revolution possible. The ideals of the Declaration of Independence and the Constitution would have meant very little without an army of ordinary men armed with weapons that made them a match for the superior organization and numbers of a world power.

Would Thomas Jefferson, the abiding figurehead of the Democratic Party, who famously wrote, "The tree of liberty must be refreshed from time to time with the blood of patriots and tyrants", really have shuddered at the idea of peasants with assault rifles, or would he have grinned at the playing field being leveled?

But the Democratic Party is no longer the party of Thomas Jefferson. It's the party of King George III.  And it doesn't like the idea of armed peasants, not because an occasional peasants goes on a shooting spree, but because like a certain dead mad king who liked to talk to trees, it believes that government power comes before individual liberty. Like that dead king, it believes that it means this for the benefit of the peasants who will be better off being told what to do.

The question is the old elemental one about government control and individual agency. And tragedies like the one that just happened take us back to the equally old question of whether individual liberty is a better defense against human evil than the entrenched organizations of government.

Do we want a society run by kings and princes who commit atrocities according to a plan for a better society, or by peasants with machine guns? The kings can promise us a world without evil, but the peasant with a machine gun promises us that we can protect ourselves from evil when it comes calling. 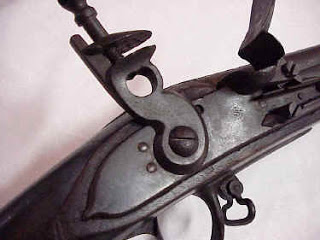 It isn't really guns that the gun controllers are afraid of; it's a country where individual agency is still superior to organized control, where the trains don't run on time and orders don't mean anything. It's afraid of individual power.

A world where the peasants have assault rifles is a world where peasant no longer means a man without any rights. And while it may also mean the occasional brutal shooting spree, those sprees tend to happen in the outposts of utopia, the gun-free zones with zero tolerance for firearms. An occasional peasant may go on a killing spree, but a society where the peasants are all armed is also far more able to stop such a thing without waiting for the men-at-arms to be dispatched from the castle.

Helpless people must find something to think about while waiting for their kings and princes to do something about the killing. Instead of doing something about it themselves, they blame the freedom that left the killer free to kill, instead of the lack of freedom that prevented them from being able to stop him.
Daniel Greenfield at September 22, 2013
Share