Someone chalked a red line down the street near my house. It's sloppy, it turns, smears and meanders. Car tires have rubbed it pink and dogs have done to it what large four-legged animals do naturally when taken out of the confines of narrow apartments. The line turns a corner and dives inside a pothole near an exposed sewer grate. And then it is gone. 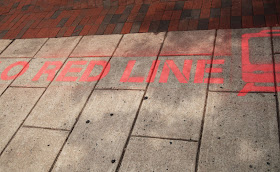 Obama's red line is more famous than my red line. It appears in the Washington Post and the New York Times. There is speculation over what the nature of the red line is, what Obama should do about the crossing of the red line and how many devils can dance on the edge of a red line while juggling Sarin canisters.

Despite being much more famous, Obama's red line matters about as much as the one in front of my building. It's there one day and gone the next and no one really cares.

The red line, the famous one in D.C. is meaningless. It exists because politicians and reporters expect it to exist. It's a necessary optical illusion that convinces them that Eisenhower or JFK are still in the White House and that the United States of America is a rational world power with standards on truly important matters such as human rights and the percentage of cow flatulence to be allowed to ascend into the atmosphere.

Obama's red line never existed. It was the sort of thing that Obama occasionally said because people expected him to say it. "Chemical weapons are bad, okay? If you use them, we'll get really upset." And the White House press corps pawed its iPads, hardly able to type for the thrills shooting through their coked up nervous systems at being in the presence of greatness.

But the teleprompter man is far too elegant wordsmiths to get bogged down in red lines. “That would change my calculus. That would change my equation,” Obama declared at one point about Syrian WMDs, channeling his inner Stephen Hawking, but sounding more like a punchline from Big Bang Theory. Whatever changes have happened to Obama's calculus equations, the equation is up there on the blackboard and it has no solution.

The idea that Obama has a red line governed by the number of people who are killed is slightly sillier than the plot of every big budget summer movie rolled together. Obama made it clear that genocide in Sudan or the Congo were not criteria for military intervention. But when Gaddafi took the initiative, Obama went to war in defense of a lovely peaceful city named Benghazi that the Nobel Peace Prize winner declared was on the verge of being exterminated.

What set one African country apart from another? Cynics might point to oil and race, but those are just elements of the larger calculus equation that makes Obama do things. It's his real red line that doesn't show up at press conferences because it doesn't sound good. The real red line has nothing to do with how many people die in Syria. It has to do with how those deaths slot into the larger agenda for the region.

Obama allowed the thin red line myth to go forth and now he's stuck with it. The old liners at the Washington Post who still think that we're living in 1958 keep calling on Obama to show leadership. But how is he supposed to do that? He's not a leader. And even if he were, he certainly would not be their kind of leader.

The left has a long history of marrying incompetence and malice. It excels at taking power and fails at trying to use it. It is good at convincing people of things, so long as those people are out in the streets shouting about jobs and food. It is quite capable of looting a country, but incapable of building it up except through the crudest brute force forms of industrialization that fail before too long.

Behind the big fat red line of the Soviet Union was a monstrous regime that got its ass handed to it by its Nazi allies in a hot war and then got its ass handed it to it again in a cold war by the United States. The United States saved the Soviet Union twice, once from famine and once from war and nearly saved it a third time economically. The Soviet Union had thoroughly infiltrated Western elites and even received nuclear weapons technology from them that it could use to destroy the world. And it still failed miserably. 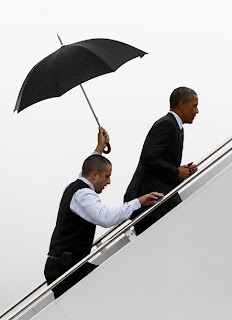 Obama's red line leadership marries incompetence and malice. The left's big idea of dismantling American power leaves it with few ways of using American power. Like the idiot who campaigns against hammers only to realize he has no way of nailing up his anti-hammer posters, he is stuck between making empty threats that no one believes in and then having to either back down or nerve up and carry them through because the threats alone have no credibility.

The foreign policy establishment threw itself into the idea that the Arab Spring represented a historical movement that could not and would not be denied. (Except in Bahrain where the protesters were Shiites going up against the House of Saud which happens to own the White House mortgage.) The dictators, without oil, were told that standing in the way of a historical movement of price protests hijacked by left-wing and Islamist mobs was futile. Either they would step down or the people would throw them down.

Gaddafi chose to test the force of history and won. And once it was clear that he was winning, the jets that no one thought of sending out to stop genocide anywhere in Africa were dispatched to protect that jewel of democracy, Benghazi. Now Assad is testing the farce of history. And while he isn't winning, he hasn't lost either.

Obama's real red line has nothing to do with how many Syrian civilians die. No one in Washington cares about dead Syrians. They care about who is going to win in Syria. Their credibility has been staked on a rebel victory. Their red line is a rebel defeat like the one that forced Obama, Sarkozy and Cameron to jump into the Libyan War on the pretext that they were protecting the civilians that they couldn't give a stale fig about anywhere else in Africa.

Dead civilians are worth a stringer's photo with the contrast enhanced to show the magnificent desolation of war. It's the sort of thing that Bush might have naively cared about, but we all know he was a moron who just wanted to start crusades, kill Iraqis and paint dogs. His far more moral successor only starts smart wars in defense of grand historical movements that globalist flat earthers like Thomas Friedman insist will usher in a new age in the old Middle East.

If Syria actually did use chemical weapons, all it did was embarrass the emperor of peace by exposing the nakedness of his pretensions. Clinton shrugged his shoulders at Rwanda and Sudan, but bombed Yugoslavia over false claims of genocide. It did not take very long for his ideological successor to do the very same thing in Libya. It doesn't matter how often George Clooney goes a week without shaving, shoots his cuffs and has his assistant chain him to the fence of the Sudanese mission, the right to protect is never going to show up over Sudan. 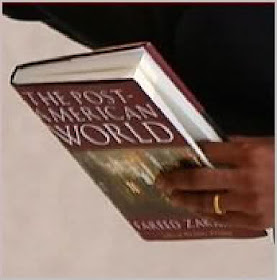 None of this is about human rights. It's not even about humans. It's about big pictures and even the
devoted readers of books about the Post-American World Order still have their big pictures.composed of grand historical movements and massive chess games in which leaders can be raised and toppled, in which power can check power until a perfect stabilizing point is reached and the rest of the world decides to start killing its own babies, dismantling its own industry and dedicating all its efforts to turning out graduates with three degrees to teach small children about transgender identity.

That obviously isn't going to happen. The plan to turn over the region to the moderate Islamists worked out about as well as the plan to use the Ayayollah Khomeini as a stabilizing force in Iran. Fortunately believers in grand historical movements don't back off because they have been proven wrong. They don't stop when the bodies begin piling up. Instead they move forward certain that they are doing the right thing, even if the dimmest man alive would have figured it out by now.

The red line in Syria isn't chemical weapons or blood. It's ideology. It's the red-green alliance exacting its deadly toll while the Great Teleprompter squats behind his curtain making shadow puppets on the wall and telling self-deprecating jokes to the press corps that waits for leadership and worries that the dictator, the other dictator, has called his bluff and he is going to have no choice but to ante up or fold.
Daniel Greenfield at September 08, 2013
Share