The Right to Happiness

Revolutions are not unique. Before the fireworks begin bursting in showers of life over American skies, they fall sparkling over the crowds of Tahrir Square to commemorate another revolution. 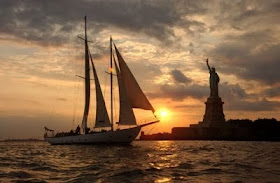 Some countries have revolutions all the time. After a while revolution becomes a national sport. In banana republics, the overthrow of one dictator to make way for another gives everyone a day off from work. But these revolutions, no matter how they are cloaked in the familiar rhetoric of liberty, are nothing more than tyranny by other means.

What made the American Revolution unique was that its cause was not the mere transfer of power from one ruler to another, or one system to another, but a fundamental transformation of the nature of rule. Every revolution claims to be carried out in the name of the people, but it's never the people who end up running things.

The Declaration of Independence did more than talk about the rights of the people. It placed the people at the center of the nation and its government, not as an undifferentiated mass to be harnessed for whatever propaganda purposes they might be good for, but as individuals with hopes and dreams.

"We hold these truths to be self-evident, that all men are created equal, that they are endowed by their Creator with certain unalienable Rights, that among these are Life, Liberty and the pursuit of Happiness.--That to secure these rights, Governments are instituted among Men, deriving their just powers from the consent of the governed."

In a time when government mandates caloric consumption, cracks down on cold medicines and regulates every aspect of daily life for the greater good-- the declaration that started it all declares that the purpose of government is not social justice, a minimally obese population, universal tolerance or even equality. Equality is acknowledged as a fact, not as a goal. Instead the goal of government is to allow people to be happy.

That seems like a silly goal. What kind of great nation gets started by asserting that government exists to allow people to be happy? But look at the common condition of any tyranny. Take in that sense of 1984ness and its most obvious characteristic is unhappiness. People are persistently unhappy under a tyranny, whether they are rich or poor, because they are robbed of the necessary freedom to pursue individual happiness. They are not allowed to be individuals. 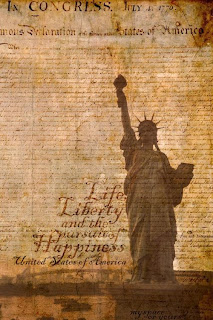 We live in an age of collective tyrannies under systems that seek to maximize the ideal welfare of the group. They care nothing for the happiness of the individual. And they care even less for the notion that the individual has a right to achieve that happiness by pursuing it on its own terms, rather than through their socially-approved and market-tested form of happiness.

Modern revolutions are solution-based. So are modern governments. Redistribute the wealth. Power to the workers. Put X in charge. Strengthen Laws Y through Z. Impose your will on everyone else. And there is the Declaration of Independence, old and worn, offering up an idea as fragile as a butterfly, that government does not exist to impose solutions, but to protect the individual's pursuit of happiness.

The pursuit of happiness is not necessarily wise. It is often foolish. One man finds happiness in overeating and yet he lives in a society where his pursuit of gorging on giant sodas and salty snacks is protected from all the fidgeting experts eager to rush in and begin prodding him into good health. Another man finds happiness in inventing airplanes and is free to essay flight despite all the bearded men and women wearing fake Indian jewelery and smelling of patchouli who want him to write up an environmental impact statement.

Happiness is individual and individuals are eccentric. Their pursuits of happiness will have both good and bad in it. Individuality is the ultimate diversity and there is no substitute for it if you want a society that breaks through barriers, rather than wrestling in the streets over the fortieth revolution that will finally convince everyone that the right way to live is under Osceopeology. (It won't.)

The Declaration of Independence was not only a national statement, but an individual statement as well. It envisioned a government fit for individuals, rather than massive masses. A government that would free individuals to pursue their own goods, rather than enslaving them to the greater good that is intellectually fashionable at any given moment.

And that is what makes it more relevant than ever. The Redcoats are not about to march into Boston, but the Regulators are. The rising power of government has transformed its laws and systems into a means for the elites to impose their will on the whole country, to stamp out their private pursuits of happiness for collective ends.

The nanny state, like every good nanny, is suspicious of private and unsupervised pursuits of happiness. It accepts equality not as a fact, but as a goal, whose achievement requires the absolute and total regulation of all private matters and activities. It has no truck with liberty because it understands, rightly, that liberty imposes limitations on its powers of control. 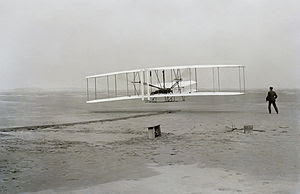 An unalienable right can be restricted or taken away, but it never disappears. It never goes away because it origin source in a Divine Power transcends governments and ideologies. It is not bound by the fashions of the day. It is a permanent and absolute statement that the dignity of the individual is not distributed with a soup ladle in the shelter of the state, but comes from the individual. It is not the people who need governments. It is governments who need people.

As we celebrate the Fourth in an America where the pursuit of individual happiness has been forgotten and repressed, mark the occasion by exercising your right to the pursuit of your happiness.
Daniel Greenfield at July 03, 2013
Share