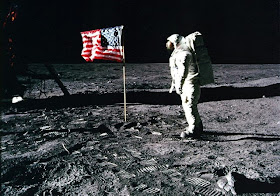 On Frontpage, I wrote a more policy-based follow-up to this week's article The Eagle has Landed.

In 2008, Obama hypocritically blasted the Bush Administration for allowing “a five-year gap after the retirement of the Space Shuttle” during which time “the United States will have to depend on foreign rockets and spacecraft to send Americans to orbit”.

Obama claimed that he wanted to retain a working space shuttle. In office however he scrapped the shuttles leaving the United States wholly dependent on Russian Soyuz rockets. Around the time that Bolden was telling America that we would not go to the moon, his skeleton of a space agency, now concerned with Muslim outreach and Global Warming, was paying the Russian space agency $424 million for six Soyuz seats.

“By buying the services of space transportation, rather than the vehicles themselves, we can continue to ensure rigorous safety standards are met,” Obama said at the John F. Kennedy Space Center.

Quoting him, Neil Armstrong wrote, “It was asserted that by buying taxi service to Low Earth Orbit rather than owning the taxis, “we can continue to ensure rigorous safety standards are met”. The logic of that statement is mystifying.”

It’s even more mystifying considering that the taxis are now unreliable Russian space junk that suffer from reentry “glitches” with American astronauts on board.

It’s not that the money for the space program isn’t there. It’s just going to different places.

During Obama’s first year in office, economic aid to Pakistan nearly tripled to $1.3 billion. While Obama could find no room in his budget request for the Constellation space program, a year after the Bin Laden raid, which caught Pakistan harboring America’s greatest enemy, the 2012 budget requested $3 billion in aid for Pakistan.

Bush cut economic aid to Egypt. Obama increased it. Foreign aid to the Palestinian Authority shot up from $414 million to $980 million in 2009. US contributions to the UN passed $6 billion; a 50 percent increase.

By 2011, total foreign aid spending had increased by 80% from $11.4 billion to $20 billion. In 2010, Neil Armstrong had sent in written testimony to a Congressional hearing stating that budget reductions for the Constellation program totaled $20 billion.


You can read the entire piece at Frontpage. Muslim Self-Esteem or the Stars.

THE IRON LAW OF O

It’s an iron law of nature as certain as the one about an angel getting its wings every time a bell rings or a snowstorm blanketing the area every time Al Gore comes to town to remind the carbon puffing infidels about global warming: every time Obama gives a speech, a thousand businesses go out of business.

On July 24th, Obama delivered yet another economic speech in which he castigated Republicans in Congress for the sequester that he proposed, promised big economic benefits for the entire country from green energy and illegal immigration and promised to spend every one of his remaining days trying to help working people; at least those days when he isn’t on the golf course, on vacation at Martha’s Vineyard or delivering useless speeches.

It’s an FDR-on-crack assemblage of crackpot social plans masquerading as economic plans and homey testaments to American exceptionalism wrapped around bankrupt Euro ideas about how to run a country into the ground.

“Finally, we agreed that one of the great sources of strength between our two countries is the Vietnamese American population that is here but obviously has continued strong ties to Vietnam,” Obama said.

Much of America’s Vietnamese population came here as refugees. It’s like claiming that the Cuban community bonds us to Castro.

“At the conclusion of the meeting, President Sang shared with me a copy of a letter sent by Ho Chi Minh to Harry Truman.  And we discussed the fact that Ho Chi Minh was actually inspired by the U.S. Declaration of Independence and Constitution, and the words of Thomas Jefferson.  Ho Chi Minh talks about his interest in cooperation with the United States.  And President Sang indicated that even if it’s 67 years later, it’s good that we’re still making progress,” Obama said.

The message to Truman came in 1946. By then Ho Chi Mihn had long been a dedicated Communist and Soviet agent. At the time the letter was sent, Ho Chi Mihn was murdering his political opponents while trying to wheedle Truman into helping him out.

The message here is goodbye British louts, hello Saudi Islamists. I imagine the mandatory bathing suit in Majorca will soon be a Burka.

The Spanish island of Majorca has implemented a ban on drinking alcohol in public and plans to replace its budget hotels with upmarket luxury resorts in a bid to discourage binge-drinking European holidaymakers and replace them with high spending, wealthy tourists from Dubai.

“We want people who spend a lot of money, such as more tourists from China and Dubai. St Tropez, Miami and Las Vegas are the places we’re orienting ourselves towards,” Alvaro Gijón, deputy mayor of the island’s capital Palma de Majorca, added.

Because the one thing Miami and Las Vegas are known for is being alcohol free.

During his visit to Israel, Obama declared that “I genuinely believe that you do have a true partner in President Abbas… I believe that. And they have a track record to prove it.”

The track record is certainly there.

Palestinian Media Watch has reported that the Palestinian Authority, led by Mahmoud Abbas, has honored Palestinian terrorist Ahmad Abu Sukkar, who murdered 15 Israelis and Americans, and wounded 77 others in the Zion Square Refrigerator Bombing on July 4, 1975.


In a eulogy, Palestinian President Mahmoud Abbas stated, “’His pure soul passed on to the kingdom of Heaven during these blessed days in this honored month [Ramadan] after a journey of struggle full of exceptional giving and devoted activity for Palestine.”

Michael Ben-Yitzchak (Isaacs) was an Oxford graduate who was born in Glasgow, Scotland. His wife, Rifka Soifer, was a Brooklynite, who was out shopping with her husband when the bomb went off.

The fridge bomber also killed a number of Muslims.

Nazih Hamad, was 25 when she died, rose early that Friday to buy a wedding dress for her wedding, which was scheduled to take place less than a week later. She was killed with her sister and cousin in the attack

The latest Big Brothersque announcement from Obama Inc. is that national housing policy is about to be retooled around mandatory diversity. What this will mean is that state housing agencies will have their grants dependent on forcing mandatory diversity on developments, likely through some quota system, even if those developments don’t require federal funding.

Is Alaska going to have to start recruiting black people from Florida with incentives?

Apparently lies about sex and salacious revelations qualify you to be President of the United States. But not for the much more important job of Mayor of New York.

“The serially evasive Mr. Weiner should take his marital troubles and personal compulsions out of the public eye, away from cameras, off the Web and out of the race for mayor of New York City,” the New York Times said.

If only it had said the same thing about President William Jefferson Clinton and his martial troubles and compulsions. Instead it called for Bill to accept censure and stay in office.

During Kerry’s confirmation hearing, he claimed that Morsi declaring that Egyptians should nurse their children on hatred for the Jews was no reason not to give Morsi a bunch of F-16s.

Are You Ready for the Trayvon Martin Portrait Made of Skittles?

So cue the big speech which is being delivered as behind him, Detroit goes bankrupt. Or fights for the right to go bankrupt.

This is what our modern Lincoln, FDR, Reagan, Aaron Burr and Jimmy Carter wrapped in one man said not too long ago.

Obama’s 2011 speech described a Detroit that can only be described as a myth wrapped in a wish inside a dream.

“This is a city that’s been to heck and back,” Obama said. “And while there are still a lot of challenges here, I see a city that’s coming back.”

Why would the Senate bill allow an alien to have two drunken driving offenses before it becomes an issue for citizenship on the third time caught. It takes only one drunken driving event to bring death or lifetime injuries to a legal American.

But here’s an easy one: Under the Senate bill, why would Border Control/Patrol/Agents/ICE be moved from Homeland Security to the Department of Justice’s Human Rights Division – the same wing of the DOJ who told a judge to shove his guilty judgement against the New Black Panther Party’s voter intimidation in Philadelphia?

Who better to advance the unconstitutional invasion of illegals into the U.S. after the pathway to citizenship makes tens of millions legal, than the Department of Justice. Eric Holder said he wasn’t leaving office because he still has goals to meet. This is a big one.

A GHOST OF GLASS

What we have on our hands is clear, inarguable evidence of partisan-driven bad faith on the part of The New Republic's writers and editors, and probably its super-liberal ideologue owner, too.

The New Republic demonstrated its commitment to dishonesty in its first stealth edit.

Here was their first claim about the 311 call about an unattended 7 year old boy wading out into traffic :

Emphasis in original. Now, the facts came out, and they were not pretty for TNR:

[M]ost egregiously, Zimmerman’s call (to the non-emergency police number) regarding a seven-to-nine-year-old black boy was placed because Zimmerman was “concerned for [the] well being” of that child, who was walking unaccompanied on a busy street (see page 37).

At this point TNR knows it has the story wrong -- way wrong -- and we know that because they now endeavor to clean up their article with a stealth edit.

. . Zimmerman was an edgy basket case with a gun who had called the polics 46 times in 15 months, once to report on a seven year old black boy.


from Ace of Spades.

THE BOYS OF BENGHAZI

The Battling Boys of Benghazi

We're the Battling Boys of Benghazi,
no fame, no glory, no paparazzi.
Just a fiery death in a blazing hell
defending the country we loved so well.
It wasn't our job, but we answered the call,
fought to the consulate and scaled the wall.
We pulled twenty countrymen from the jaws of fate,
led them to safety and stood at the gate.
Just the two of us, and foes by the score,
but we stood fast to bar the door.
Three calls for reinforcement, but all were denied,
so we fought and we fought and we fought till we died.
We gave our all for our Uncle Sam
but Barack Obama didn't give a damn
just two dead SEALs who carried the load
no thanks to us - we were just "bumps in the road."