A Nation of Living Constitutions

"Today, people are more persuaded than ever that they have perfect freedom, yet they have brought their freedom to us and laid it humbly at our feet." 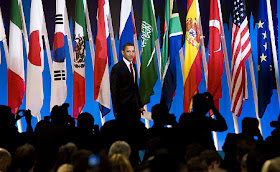 Freedom exists by virtue of an independence from the powers that might take that freedom away. Rights exist to fence out authority from the space allotted to freedom.  The more leverage the citizens have over the authorities, the more they can prevent those rights from being trampled upon.

The problem begins when people begin to assume that the rights they enjoy are inherent to the system, so that they don't have to worry about them. As long as the system exists, so do their rights.

Many Americans assume that as long as the flag waves and everyone celebrates the 4th of July, then their rights are safe. But it is entirely possible to have an America in which the flag still waves and people still go to see fireworks on the 4th of July, and in which there are no more rights or freedoms left. This can happen when people forget what the flag means and what the 4th of July means; the symbolism of a flag composed of individual states, and a holiday celebrating the Declaration of Independence, which holds that a people may overthrow a government when it violates their rights.

It is dangerous to celebrate symbols while forgetting what they mean. Because a nation's fundamental symbols are the keys to its power. They are its scepters and thrones. And when people forget what the symbols mean and begin bowing to the symbols themselves-- a tyrant can take the symbols and have people bow to him, even as he desecrates what those symbols actually stand for.

Obama's rise to power could not have taken place except through a forgetfulness that has been with us for some time now. And Obama has been quite talented at manipulating symbols, posing in front of half a dozen flags, a Superman statue, glowing halos, historic sites and documents. That these symbols have no meaning to him except as tokens of power, that his very presence next to them or adjacent to them, should be anathema because of the profound gap between the ideals they represent, and the agenda he represents, is obvious to those who remember that symbols also have meanings.

But Obama's success is due to those who do not remember. To whom the flag represents America, but who do not understand that it is not a random selection of shapes meant to look pretty against a blue sky. To whom the Constitution is a document that protects their freedoms, without understanding how it does that and what part their active participation must play for it to work.

Obama exploits symbols, while the media warns about the dangers of anyone literate enough to understand their meanings. In the kingdom of the blind, the one eyed man is a dangerous extremist. Because he can see what those in power can't. 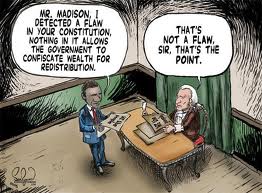 Unfortunately we live in an age in which people take systems for granted. The world around us teems with complexity. We use technologies we don't understand. We rely on bureaucracies whose complexities we can't navigate. The dramatic expansion of the government has made its workings incomprehensible. The ObamaCare bill alone defied anyone to read through the whole thing. In the face of such complexity, it becomes easier to be satisfied with symbols. And it also becomes easy for those in charge to play on that resignation, blurring the lines between permissible and impermissible uses of authority, and then wiping out those lines altogether.

Law has always been the obstacle of those who want unlimited power because laws are created to form boundaries and restrictions. Those who want unlimited power will either tear down law or make law itself so complex that it becomes nearly incomprehensible. To multiply law upon law, until there are so many laws that everyone is either guilty of something, or suspects that he might be until the citizenry themselves will happily tear down the law, will ignore wrongdoing by the high and mighty, and instead of knowing their rights, they will look for someone to protect them.

If no one understands the system or its laws, it becomes easy to play divide and conquer. To convince different groups that their welfare is in jeopardy, to promise each one a bigger share of the pie, cheat them all, and pass the blame from one group to the other. Class warfare, racial warfare, farmers against city dwellers, owners against workers, each county against the other, each state against the other. And all you have to do is be in a position to control and distribute all the money.

Then wave the right symbol at the right time. A flag, the Constitution and some fireworks. It doesn't really matter much by then anymore.

And in the process both rights and freedoms have vanished. Because the legal guarantees no longer mean anything, they only worked when an informed citizenry controlled the system, and freedoms no longer exist, because there is no such thing as independence from authority anymore. Authority is now everywhere. And everything depends on it. Even the words themselves lose all meaning. Privileges are redefined to mean rights. Freedom comes to mean being told what to do.

Freedom requires independence from authority. Rights only exist so long as those in authority are prevented from rewriting the laws to give themselves absolute power. But political and cultural elites habitually attempt to rewrite the laws, sometimes with the best of intentions, sometimes with the worst, but whatever their purpose, the new laws eventually promote centralization and eliminate rights. Finally the only law is that of power. No other laws matter anymore.

In order to get there, the system must be torn down and rebuilt again in a new image. And yet make it seem as if nothing has changed at all. Because the flags are still waving, and everyone still celebrates the 4th of July. Which means there must still be freedom, all evidence to the contrary. So the new system retains the old symbols, because it finds them useful in manipulating the complacent. But the ideas and powers the symbols represent, no longer exist.

The new system celebrates its own unlimited power, reflects the self-adoration of its masters, reeks of their arrogance and resonates to their childish willfulness. For in the end those who want unlimited power are damaged souls. Children determined to be the only ones to play with any of the toys. Their lack of empathy, their arrogance and ruthlessness all signal their fundamental immaturity. They are determined to rule, to pillage and plunder, to wield absolute power-- because there is something missing inside them. 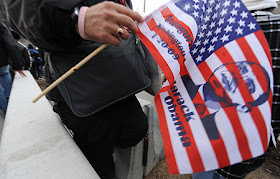 Rewriting the laws enables them to control everything. Convincing some of the people that they are the only thing standing between them and the supremacy of the other people, they have already told the same thing to, they gleefully prey on people's fearfulness and greed. They believe in wealth redistribution, but primarily for themselves. And by consolidating power, they also consolidate wealth. In the name of the people, they rob the people. And they do it under the symbols they have misappropriated. The symbols that mean their actions are illegitimate.

The greatest threat to tyranny is a people who refuse to give up their rights, or to let those in power rewrite the laws to suit themselves. The political and cultural elites will always attempt to do this, undermining the system as it is, in order to gain power, loot and pillage everything under the control of that system, and then preside over its decline. The Constitution was created to stop that from happening. It represents a shield against tyranny, but all documents are in the end only words and paper. It is only people who can preserve and realize them. There is no magic in paper and parchment, nor in ink alone. It is living men and women who are the stewards of their heritage, living Constitutions and flags, blood not ink, skin not parchment, who give it potency, who can keep its ideals, so that it does not become only a symbol enshrined in a glass case. Because only a nation of living Constitutions can be free.
Daniel Greenfield at July 07, 2013
Share