Ever since FDR made it his campaign song in 1932 while running for office during the Great Depression, the unofficial anthem of the Democratic Party has been that Tin Pan Alley classic, "Happy Days are Here Again." But no matter how often the old Victor spun, it would not be until well after Roosevelt's death that happy days would be here again. 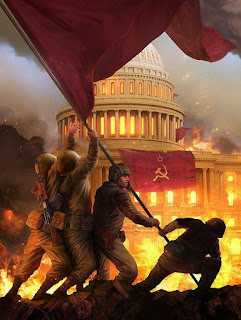 Like Hope and Change, Happy Days are Here Again was a blandly optimistic and non-specific promise that good times were coming. Someday the happy days would arrive, an appropriate enough sentiment for a song whose pivotal moment came in the movie "Chasing Rainbows" where it was sung to reassure a cuckolded husband who is threatening to kill himself. And in an even more appropriate bit of symbolism, the actual movie footage of that moment is as lost as the happy times.

No matter how often the Democratic Party cheats on the American people, it can always break out a new rendition of "Happy Days are Here Again" to win them back. And even if the happy days never seem to actually arrive, the promise of "So long sad times" and "Howdy gay times" where "your troubles and cares are gone" is always a winner.

While the American Democratic Party may not have an official anthem, the British Labour Party does and its anthem, "The Red Flag" would be entirely appropriate for the new Democratic Party that no longer has anything in common with Thomas Jefferson or Andrew Jackson.

It might be awkward to imagine Harry Reid or Joe Manchin trying to make it through verses like, "The people's flag is deepest red" and the sonorous chorus, "Then raise the scarlet standard high /Within its shade we live and die/Though cowards flinch and traitors sneer/We'll keep the red flag flying here."

They would probably look almost as awkward singing it as Labour Party leader Ed Milliband does, but you could easily imagine Barack Obama and Valerie Jarrett belting it out. And that would be only right because while The Red Flag never gets around to mentioning Manchester, despite its popularity there, it does namecheck two cities. "In Moscow's vaults its hymns were sung/Chicago swells the surging throng."

These days red flag songs, once mandatory, are confined to all sorts of vaults in Moscow. The new Russian anthem is Putin's redress of the old Soviet one, with lyrics by the same composer. And the Soviet National Anthem, that secular hymn, has a familiar pedigree going back to the Anthem of the Bolshevik Party in 1938, which took its melody from "Life is better, Life is fun."

You might be forgiven for thinking that the Bolshevik Party had borrowed its melody from some Moscow musical, but that wasn't the case. "Life is better, Life is fun" was based on a statement by Stalin: "Life has become better, comrades. Life has become more fun." The year was 1935 and while it is impossible to know whether Comrade Stalin had decided to crib from the Democratic campaign of 1932, the theme was the same. So long sad times. Happy days were here again.

And just to remind everyone that happy days really were here again, Stalin began another round of brutal purges. A year earlier, Uncle Joe, as the Fireside Chatter liked to refer to one of the world's bloodiest mass murderers, had arranged for the murder of Sergei Kirov, who was everything that Stalin wasn't, and used the murder to begin a purge of anyone more popular than him, with the support of red flag wavers in Chicago, New York, London and Los Angeles.

Unlike Franklin, Stalin's idea of a campaign involved a lot of firing squads to properly soak the red flag in the deepest red, while the band played, "Life is better, Life is fun." After the purges were wrapped up, Stalin signed a pact with another red flag waver from Berlin. The Nazis and Communists might have disagreed on any number of things, but both of them had inherited the Jacobin fetish for painting a flag red with blood and then waving it while calling for more death.

While Moscow might have turned in its red card, Chicago's "surging throng" is still swelling the polls, and even though their shirts are purple, their fingers are red from the strain of repeat voting. If there is anywhere in the United States that the red flag has gone on flying, outside of Marin County, it's Chicago. In its shade, generations have lived and died, and now generations have begun living and dying in its shade across the country as the red flag keeps flying for another four years over D.C. 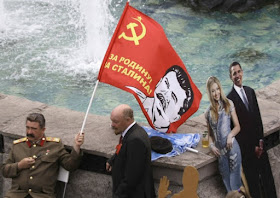 The red flags of the post-modern, post-American, post-British, post-everything revolutionaries aren't usually as obvious as a gang of wealthy politicians staggering to a microphone once a year and belting out, "We'll keep the red flag flying here". It usually sounds more like the parody of that anthem, known somewhat sarcastically as  the "Battle Hymn of the New Socialist Party,"

"White collar workers stand and cheer/The Labour government is here/We’ll change the country bit by bit/So nobody will notice it." A policy of changing the country bit by bit so none of the workers who want their benefits notices that everything else they value is being dragged away to the rubbish heap while they sleep may be sneered at by the real reds, but it's worked quite effectively.

Tony Blair did a masterful job of changing Britain, leaving behind Neil Kinnock's threats to take the workers into the streets if the election did not go his way. (It did not. He did not.) Kinnock proved good enough for Joe Biden to plagiarize his biography from, but the future rested with a sensible left. A New Labour that would talk like technocrats while importing unprecedented number of immigrants to change the electoral balance of the country, so that the red flag would go on flying here, even if it was green and had a crescent and a pair of crossed swords in the middle.

Instead of the flying red flag, Tony Blair's New Labour used D:ream's "Things can only get better" as its election anthem, which despite a title that made it sound like another, "Happy Days are Here" or "Life is better, Life is fun" was more of a love song to a Labour messiah promising to cure "prejudice and greed".

"Walk my path/Wear my shoes/Talk like me/I'll be an angel," New Labour voters were promised and they fell for it. The age of the Me Generation PM was here and the new egotism resounded in lyrics like "Things can only get better/Can only get better/Now I've found you/(That means me)" that took both self-help and self-involvement to a whole new level. But British voters probably should have paid more attention to warning lyrics like, "I sometimes lose myself in me".

It's Chicago time now and the red flag is back. Talk of changing the country bit by bit is done. Now the country is being changed aggressively, every change a finger poke in the eye of the people who don't notice right what is in front of their faces. The cuckolding is no longer subtle. It's more out in the open than ever and the country is being bankrupted and the middle class is being wiped out to a rousing chorus of "Happy Days are Here Again", when an entire generation has come of age never knowing a time when happy days prevailed.

Whatever faults Kinnock and old Labour had, losing himself in himself wasn't one of them. But the Baby Boomer and Generation X leaders had the narcissistic habit of doing just that. Clinton and Blair both lost themselves in themselves and since then never appear to have found themselves again. And Barack Obama never lost himself in himself because he never stepped out of himself to begin with.

Obama marries the red flag radicalism of the old left with generational egotism to show us the spoiled brat as leader, the tyke born with a set of silver spoons in his mouth who not only waves the red flag, but who mistakes his shamelessness for political genius. Where Clinton limited his shamelessness to his personal life, for his Democratic successor, in the tradition of both the hard left and the fellowship of mirror gazers, the personal has always been political. To the Hope and Changer, the man is the office, the state is the man, and the whim is the national agenda. 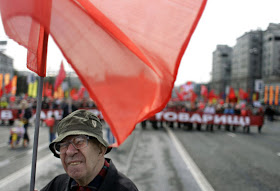 Stalin famously told his mother that he was the new Czar, transmuting collectivist revolution into the egotistical authoritarianism of one man. Obama has managed the same trick, merging revolutionary politics with his own brand until there is no longer a difference between the man and his revolution. FDR only promised happy days, but Obama has become the actual incarnation of hope, which may explain why there is no longer any hope to go around.

There is a flag flying over Washington and it's no longer the stars and stripes, but the same red flag that flies over Chicago. It's the red flag under whose shade misery and tyranny spreads while the band strikes up the same anthem over and over again. "Happy days are here again." Life is better, life is fun." "Things can only get better" and of course Obama's victory speech promise; "The best is yet to come."

It might have been more honest if he had instead admitted, "We'll keep the red flag flying here."
Daniel Greenfield at June 09, 2013
Share