The Apotheosis of Chris Christie

Turn on the television and wait five minutes and it begins playing. "It's in our blood, our DNA," the painfully high voice sings, "Because we're stronger than the storm." The ad closes with New Jersey Governor Chris Christie and his family playing on the beach. 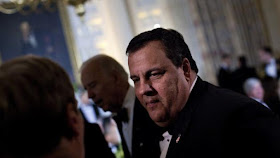 The 25 million dollar ad campaign feels like it has been in rotation forever.  The earnest warbling of the song can be heard everywhere. It probably isn't doing much to move tourists to the Jersey Shore, but that isn't what it's there for. It's there to remind everyone that Christie is the guy who flew over the state in a helicopter after Hurricane Sandy. We're not stronger than the storm, is the message. Christie is.

Some Democrats have criticized both moves as cynical elections ploys and that's true and it isn't. The election, against a placeholder candidate, is no threat to Governor Christie who is running 60 to 28.

No matter how many minority voters Cory Booker brings to the polls (and it's no sure bet that he will bring any, Booker for the moment is far more popular among white liberals than among the inner city voters he is deserting in Newark)  there is no conceivable way that Christie could lose this election.

But it's not just about winning another four years. It's about 2016.

Christie doesn't just want to win. He wants to win by a landslide. And he doesn't just want to win by a landslide. He wants to win as many Democrats and Independents as he can to make the case that he is the sure thing for 2016. The candidate who is bound to be electable because he has a track record of winning over blue voters.

The 2012 election involved two deals being cut for the 2016 election. Obama cut a deal with Bill Clinton to endorse Hillary for the Democratic nomination in 2016 in exchange for Bill coming out there and campaigning for him and another deal with Chris Christie to give him an easy election now and a clear path to the Republican nomination 2016.

Unprecedentedly the deals made in 2012 are supposed to lock down the nominations for both parties in the 2016 presidential election.

Christie considered jumping into 2012, before deciding to stay out of it. But that didn't mean that he had any interest in Romney locking down the job and preventing him from running until 2020. And he gave Romney exactly the kind of help you would expect from a man who ran ads in 2008 touting his compatibility with Obama.

New Jersey politics has always been cynical. Its last governor was responsible for a monumental financial scam. The governor before him resigned after a gay affair spilled out into the tabloids. The President of the New Jersey Senate doubles as the General Organizer for the International Association of Ironworkers. 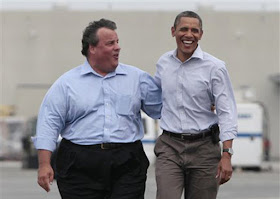 In carefully culled soundbites, Christie's brazen attitude can seem like a reformer's breath of fresh air, but it actually reeks of the contempt for voters and everyone else that is typical of Jersey politicians who pride themselves on not even pretending to give a damn.

When it comes to carefully cultivating the attitude of not giving a damn, Christie has been ahead of the pack. And that's still his attitude while planning for a national election as the candidate from a party whose base and activists and even fellow politicians despise him. It's not an unreasonable attitude. The Romney ticket was met with groans and distaste, but was sold on electability. If Christie can nail down a huge percentage of Democratic voters, then he has a much better case for electability.

Christie is running for election on liberal training wheels. The media sings his praises and liberal donors send him big checks. His real opponent, Cory Booker was pressured by his own party into running for a senate seat that unfortunately happened to be occupied by Lautenberg, who to everyone's relief passed away conveniently clearing a path for Booker and Christie. But if Booker were going up against Christie, then Christie wouldn't be planning to use all those Democratic vote totals to make his case for 2016.

In 2009, Christie squeaked by with 3 percent. This time around he's running against a non-candidate as the man who got New Jersey through the storm. Whatever numbers he gets won't translate to a national election against Hillary Clinton. And the glowing media profiles will shut off once he gets the brass ring and becomes the fat man standing in Hillary's way. And then the hero will become the villain. That's what happened to moderate mavericks like John McCain and Mitt Romney.

Learning from history isn't really a specialty for Republican operatives. And unlike his prospective opponents, Christie will be able to show that he won Democratic votes in a recent election. And he expects that with a few tough talking videos the base will learn to love him while the party will come around the way that they did on amnesty for illegal aliens. Everyone wants to win, don't they?

Christie certainly does. The Governor of New Jersey is many things, but a loser isn't one of them. Unfortunately he's also opportunistic, unprincipled and completely cynical. Christie went from being a US Attorney prosecuting terrorism cases to using his office to pander to terrorists once he ran for public office. He spent his first term releasing punchy video clips of him yelling at people to give the impression that he was dramatically turning things around, when he was actually slapping band aids on the bruises. And in both elections, he used Obama as his political trump card to win a blue state.

The real Christie isn't a reformer. He's not really any different than Governor Cuomo next door in New York or Jerry Brown in California. He's a Republican by registration in a region where that doesn't mean very much except connections with a particular political machine. It says nothing about his beliefs and values. And assuming that he has any may be a very generous interpretation. 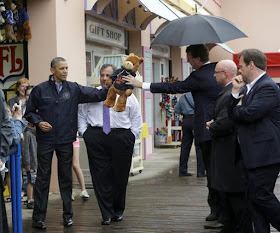 We know that Christie likes Bruce Springsteen and the image of him crying over getting a hug from New Jersey's second most overrated aging rocker while families in his state were mourning loved ones and living in tents may say all that there is to say about the authenticity of Christie's Sandy tour.

What really moves Christie isn't the opportunity to do good for the people of his state, but the nearness to celebrities like Springsteen and Obama. And perhaps that is why Christie has tried harder to be famous than to be a good governor.

Politics for Chris Christie was a celebrity audition. Now finally the cool kids have let him into the club and made him one of them.

On television the show ends and the commercial break begins. Once again the high voice begins warbling. "Stronger than ever. Whoaaah. New Jersey is stronger than the storm." The song, like so much about Christie is a fake. It comes from BANG, a New York City music production company run by a former ad executive who donated six thousand dollars to Obama. New Jersey isn't stronger than the storm. Chris Christie's political career is.
Daniel Greenfield at June 05, 2013
Share