In Venezuela, savvy shoppers are hunting down scarce supplies of toilet paper with a smartphone app. The smartphones, compact packages of electronics, are several generations more advanced than the white square, but they are available when the toilet paper isn't, because unlike the toilet paper they aren't subsidized and price controlled. 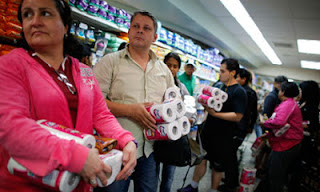 While Hugo Chavez did at one point unveil a Chavezphone for the poor, he succumbed to the wonders of Cuba's Socialist medicine before they could become as big as Obamaphones. But if Venezuela ever falls to the dumbphone, then there won't be a smartphone app to find a smartphone with.

The sight of modern men and women hunting down toilet paper with smartphones seems like the Soviet Union as reimagined by William Gibson, but it's a common enough outcome in an economy that is really a patchwork of uneven subsidies.

The Arab Spring was fueled by the social media apps of smartphones and anger over insufficient subsidies for staples such as bread and fuel. The smartphones may bring you the revolution, but it's the toilet paper and bread shortages that set them off.

The problem is a commonplace one that Americans will shortly begin experiencing with the subsidized medicine of Obamacare.

Most governments subsidize or price control some necessities to win over the underclass... or at least keep them from burning down everything in sight.

The Arab Spring took place in countries where government subsidized food and fuel existed side by side with monopolies over nearly everything held by cronies if the ruling class. Bread was temporarily cheap, but nearly everything else was either substandard or nonexistent... except for the American-designed and Chinese-built smartphones being used to document the food and fuel revolution.

A society stuck somewhere along the way in the transition between Socialism and a free economy finds itself in these savage intersections in which high technology is available, but the basic needs which the underclass is bought off with aren't.

Manhattan, that glittering island of towers rising between the waters of two rivers that are one, values real estate above gold. A square foot of dirt in Manhattan might as well be marble for what it fetches.

Finding an apartment in Manhattan is a challenge worthy of a treasure hunter and Bloomberg recently unveiled a plan for micro apartments that would be little more than closets with kitchen sinks.

Manhattan is a small and narrow strip of land which accounts for some of the high prices, but its real estate is also a crazy quilt of wildly overpriced market housing and subsidized housing projects. In some tenements rent-controlled apartments that cost less than anywhere else in the city coexist with 5,000 dollar a month pads and the only difference between them is regulation. 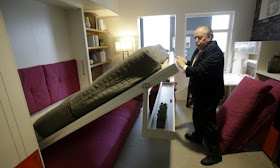 Downtown grim blocs of housing project towers crowd out riverfront views that would be worth hundreds of millions while the bankrupt city Housing Authority fights pitched battles with residents to sell a few scraps of empty land to developers to finance the welfare castles.

Uptown, large lots sit empty and bound to a covenant of affordable housing signed during the city's lean years that now make the land worthless for anything except growing weeds.

A booming housing market in the city is built on runaway prices caused by artificial shortages. Manhattan is really two islands, one is being built up and torn down again every few years, while the other is stuck in a state of permanent slumhood since the seventies. One pays for its organic grapes with smartphone apps and the other buys everything with food stamp cards.

The gap between these extremes is where the shortages form and the Middle Class eventually falls into that hole between the extremes of the liberal poor who want to be subsidized and the liberal rich who want someone to do something about the poor. The welfare class is relieved not to be burdened with the slog to the Middle Class and the crony capitalists are not interested in more competition. Both agree on a static society managed with subsidies and monopolies. This system had more than a passing resemblance to the dysfunctional countries of the Middle East. The only difference is that America still has a Middle Class for the system to drink dry.

Over in Pennsylvania, the union for liquor store workers in the state-controlled liquor monopoly is running alarmist ads insisting that privatizing the liquor industry will cause mass death.

If you can't trust ordinary mortals with the difficult and dangerous task of selling bottles of liquor, what can you trust them with? Nothing.

There is no reason why liquor has to be a state monopoly except that it pays better for liquor store workers. It also pays better in every other industry.

Nationalizing industries is a bad deal for consumers and taxpayers, but a great deal for workers. And all it takes is declaring the industry a vital one that can't be entrusted to the same boobs who run nuclear power plants, design artificial limbs and build dams, but must be put in the care of the great minds responsible for forcing banks to loan money to people who couldn't afford to pay it back, an economic catastrophe that we are still recovering from.

Like government toilet paper, subsidizing jobs makes jobs harder to find, but that is only of concern to the people who don't have them. Every economic system creates those who have and those who don't. Socialism creates have nots with the same system that it creates haves, manufacturing scarcity for social justice.

Socialism is an economy in which the haves have jobs giving out welfare and the have nots have jobs receiving it. The one truly scarce commodity under Socialism is employment because there is only so much welfare to be given out.

Consolidating an industry improves the bargaining power of its employees while diminishing the quality of service. And then there are no longer two tiers, only the tier of the monopoly.

Nationalize industries in parts or all the way and you end up with taxpayer funded and worker run industries that are run for the benefit of the workers. It's a Socialism of the civil service, a bureaucratic collectivism that plays at public service.

The return of the guild system walls off more of those rivers that the Middle Class once depended on to reach the shore. Services become sinecures. Jobs are allocated based on racial representation. The number of employees is inflated while the results vanish. The system exists for the sake of the system.

In Mexico, teachers from its powerful union pass on their jobs to their children and sell them. Soon enough it will be that way in Los Angeles too.

When jobs are subsidized then jobs are scarce and it only stands to reason that those who are lucky
enough to get their hands on government jobs will want to pass them on to their children. In America the rallying cry of teachers' unions is that they are doing it for the children. That is also the rallying cry in Mexico, except that they mean their own children. Naturally. Why should they care about anyone else's children? They're public servants, not humanitarians.

There is something medieval about public service being transformed into a family business but this sort of "privatization" is a commonplace consequence of a system in which government jobs are the ultimate commodity.

The idealism of Socialism turns savage as the Middle Class finds it harder than ever to go up but easier than ever to go down. All you have to do is give up and a life of hopelessness is waiting for you. There will even be cheap government toilet paper... though it may take a non-government smartphone to find it and a mob to keep it.
Daniel Greenfield at June 18, 2013
Share