The streets of Manhattan are full of smiling white yuppies riding their Citibank bikes, blue lights flashing as they sail through midtown traffic. But the great rack of bike share bikes planted next to a housing project is filled with its cargo of blue vehicles. No one is checking them out here. Instead black kids sit on the locked bikes, occasionally fitfully pedaling them, going nowhere. 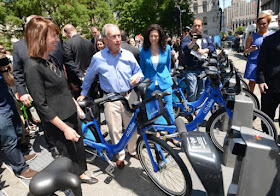 The contrast is an apt metaphor for the city. The smiling kids who could just as easily be cashing checks from their parents and working at an ad agency while trying to pay off their student debts in Portland, San Francisco or Seattle. They happen to be doing it in New York City and they expect the same social amenities, the retro bars, the craft beers, the obscure bands and the bike lanes.

The street ahead has been dug up and water has been turned off to half the block. The operation has no other purpose than to turn two lanes of traffic into some kind of complex curved sidewalk on a street where there is hardly any foot traffic and you can wait two minutes to see a single pedestrian during the daylight hours.

Such street planning assaults are happening all over the city as traffic lanes are torn out and eliminated to make way for impromptu sidewalk cafes and expanded sidewalks that often no one needs or wants. And then there are the ubiquitous bike and bus lanes which see about 1 percent of the traffic of the street and the sidewalk, but are approaching equal billing in terms of space.

When I wrote about Bloomberg's bike share program back a few months ago, I was attacked by the New York Times' Paul Krugman, Gawker, New York Mag and the New York Observer. It's easy to see what unites these outlets. They are the voices of the upscale city that doesn't drive to work, but is driven. The one that thinks the city is only a few bike lanes away from being properly European.

Krugman and Co. assumed that I was against bike shares because conservatives hate sharing. I don't claim to speak for conservatives, but most of them, I suspect, like me, are concerned about the political hijacking of urban spaces by a small elite. They are concerned that the new technocracy that men like Krugman and Bloomberg embody, are destroying the country for shallow and silly reasons.

Bikes passionately divide New Yorkers in ways that more commonplace national social issues like guns and abortion fail to do. Most social issues are really a form of class identification. When Obama sneered about poor Pennsylvania whites bitterly clinging to their guns and bibles at a San Fran fundraiser, he was really talking about class.

The America where everyone is jammed up by space and government and the one where you make your own boundaries.

To many New Yorkers, the bike is a nuisance. To others it's an identity. The issue isn't two wheels over four in some vehicular hodgepodge of animal farm. It's about control of the streets. The city is not its buildings. It is its streets. The buildings house people, but the streets define the purpose of the city. A city with streets full of cars is a working city. A city with streets full of bikes is a leisure city.

The gentrification blitzkrieg is as much social as it is environmental. It's no secret that Bloomberg hates cars. Or that the yuppies or yuckies who have transformed corners of the city into tiny slices of Portland hate them even more. The new bikeshare program is as much about displacing people as it is about placing them. It's about the kind of city that they want to see.

The old loud New York City is being made smooth and quiet. Old noisy bars are making way for fake retro establishments that look like they date back a hundred years ago, but weren't even there last week. Car lanes are giving way to bike lanes. On one side overgrown children gleefully pedal their Citibank bikes, a habit they will abandon when winter sets in. On the other, the grandchildren of factory workers and the children of postal workers, watch them go by. 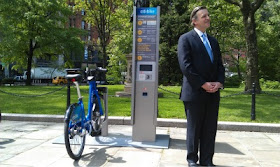 There are rural parts of the country where walkers are suspect. A man who walks down the street, rather than drives, is suspected of being a bum or a criminal. Solid citizens own cars and drive them to work or to the mall. Indigents walk. The urban centers however are swinging the other way. It's the drivers who are suspect and the bike riders who are the solid citizens of the recyclable state.

Social standing is often a function of wealth signified by leisure. Fat was in when food was scarce and having a rotund belly meant having wealth and freedom from work Now that everyone can eat, fat is out. The mark of the wealthy leisure class is the time to spend on exercise programs that transform their bodies into some ever-shifting ideal. And the peak of that leisure class is Hollywood.

Bikes, once associated with a wealthy leisure class who had the time to pursue their interest in nature and healthy activities, became universal when nearly every child could have one. Now bikes have been priced up into expensive adult toys. Cities are full of grown men and women who spend fortunes on expensive bikes that they hardly ever use except on the weekends, but hang prominently by their doors so that everyone can see.

The car owner is more likely to be a working man, while a bike communicates membership in a leisure class. Like an exercise programs, it says that the owner has the time and the money to take it slow, to not worry about timelines and deadlines, to do his own thing. The biking adult cares, which is the chief hobby of the leisure class. The more someone cares, the less he works. Caring is a full time job for people who don't have full time jobs.

Millennials are less likely to drive than any other previous generation. The American Dream in the new Yuckie outposts is compacting down from a home and car to a bike and an apartment just big enough to keep it in, a Netflix account and a small gig at a non-profit to pay down student loans. It's all very European and all very doomed.

"A European country is — like Germany, France, England — those countries are between 60 and 80 million people," Bill Maher told CNN. "We have those 60, 80 million smart people . . . but we just have more people. There’s a great, smart European country in America; it’s just surrounded by a bunch of rednecks."

It would be hard to come up with a more accurate mission statement for the new technocracy than that. Focus on that core few million who can be persuaded to ride bikes to work and get into debt obtaining degrees in useless fields and get rid of the rest. The street lanes being torn up and replaced with sidewalks and bike lanes are the physical embodiment of that philosophy. Europe is only another million miles of bike lanes away.

And that's probably true. But it's not the rational Europe where everything is neat, clean and tidy. Where everything works and no one gets hung up on nationalism or religion. That place only exists in the wishful thinking of American leftists who still carry around an inferiority complex for a mother country that they never knew.

The Europe that they biking toward is a place sharply divided between the unemployed minority youth who burn cars and the unemployed overeducated natives who have six advanced degrees and nothing to do but demand that the government lower university rates further. It's a place where some things are neat and clean, but other things are on fire. Where the only people who believe in nationalism or religion are immigrants and the nationalism and religion they believe in are of their own home countries.

Cities like New York are scurrying to attract the young urban elite with bike lanes and sidewalk cafes, with craft beer and organic food, and confidence that the only thing that can save them is transitioning to a knowledge economy in which people won't drive to work on a 9-to-5 schedule, but will instead leisurely bike around while contemplating some breakthrough social media app that will change everything.

That sometimes happens, but you can't run a city on that. Not even if you get rid of Maher's other 200 million non-Europeans who drive cars or who just sit on the racks full of bicycles and push the pedals while going nowhere.

Europe is a dead end. Its national societies and economics are in a state of deep insecurity and decline. The technocracy dreaming of a United States run to European Socialist standards is riding
a bike lane to nowhere.
Daniel Greenfield at June 27, 2013
Share