The Red Flag and the Red Blazer

Somewhere in the first half of the movie "Moscow on the Hudson", a bedraggled Robin Williams huddles on the luxurious first floor of Bloomingdale's clamoring in an unconvincing Russian accent that he wants to defect. Standing between him and a furious KGB officer is a minimum wage store security guard in a red blazer. 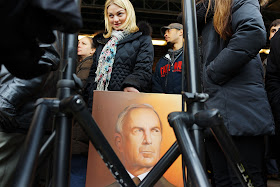 The KGB officer hisses that he protests the defection in the name of the Soviet Union. The security guard retorts that his own jurisdiction runs "from Style Boutique, through Denim Den, all the way up to Personal Fragrances." And the Soviet Union and the KGB have no jurisdiction in Denim Den.

While the KGB officer casts a terrifying supernatural pall over his own people, to a Bloomingdale's security guard armed with mace and handcuffs, he is no more than another annoying customers in a store filled with them. The red blazer trumped the red flag.

Sixty years after Stalin's death, the red flag is very much with us. The red blazer however has seen better days.

The KGB agent of the waning days of the Soviet Union might have been a comic figure, roaming the glittering aisles of capitalism, caught between sneering at the decadence of capitalism and stuffing as much of it in his pockets as possible. But the KGB agents have had the last laugh.

After Stalin's death, the KGB and the Soviet leadership had a quiet tussle that ended with the KGB being sent to its corner, under the guns of the army, and a series of uninspiring leaders overseeing the decline and fall of the Soviet Union.

Unlike the Communist Party, which in Russia largely consists of bitter old men and women kissing portraits of Stalin and complaining how the young people have no manners anymore, the KGB has rebounded by merging with Bloomingdale's.

Putin's KGB hierarchy saw no reason why the Russian people couldn't have aisles of overpriced products. Indeed the Putin era looks a lot like the 80s on steroids, big on big, full of artificial everything, million dollar opportunities, vulgarity for the sake of vulgarity, and theft for the sake of theft. Finally the ordinary Russian could have his own oversized TV, piles of debt to pay for it and the opportunity to sit watching bad Russian remakes of American 80s sitcoms.

No one in Russia would ever again have to spend oodles of time trying to understand what Marx was on about or the finer points of the arguments between the various branches of the left that invariably ended with the winners shooting the losers in the head after a series of show trials.

What Putin offered the Russian people was Communism without the Communism. A strong central government, a ruthless secret police and a cult of personality without any of the politics. There are plenty of parties in Russia, but none of them actually matter. The best of them are calculated distractions, large noisy things meant to keep the attention of the people away from those who do hold the actual power.

About the best of these is Vladimir Zhirinovsky, familiar to readers of the New York Times from the time that he posed naked in the shower on the cover of its Sunday magazine. Zhirinovsky, like Savely Kramorov, the talented comic actor who played the KGB agent in "Moscow on the Hudson", is a comic genius. The difference is that Kramorov played outrageous characters in the movies, Zhirinovsky plays one in real life.

Every so often, Zhirinovsky will say something calculatedly awful about shooting everyone who isn't in his party, dumping nuclear waste on Ukraine or using nuclear bombs on the Atlantic Ocean to flood the United Kingdom. Media outlets will sometimes report on Zhirinovsky's antics, little realizing that they are dealing with a man whose job is playing Archie Bunker in real life. During the days of the USSR, many Soviet leaders were actual idiots no better or saner than the buffoon that Zhirinovsky pretends to be. In the savvy KGB-run Russia, the people are allowed to have a man playing an idiot as a prominent politician with no actual authority. 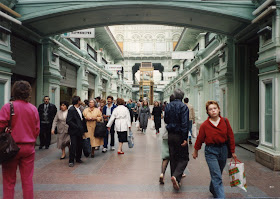 The KGB, which has gone through another one of its many name changes, no longer shrinks in the glittering golden aisles of a department store. It owns the department store and everyone in it. It has caught up to the America of the 80s and become a distorted version of it. And if that boom is built on the illegal seizure and monopolization of energy wealth, a wealth that is fading away, then the boys and girls of the sword and shield have a Plan B up their sleeve.

Meanwhile in Bloomingdale City, the opposite has been taking place. In "Moscow on the Hudson", the quintessential 80s cast of New York City movie types, a loudly gay fitting assistant, a jive-talking black man, a group of Japanese tourists photographing everything, included a beefy cop with a Brooklyn accent arriving to announce, apropos of nothing, that, "This is New York City, a man can do whatever he wants."

That line could have still been delivered with a straight face in 1984. It would be met with uproarious laughter today. In the New York City of today, a man can do whatever he wants, except order a soda, have some salt, drive his car through midtown, smoke, drink and about forty thousand other things. A Soviet citizen arriving in the New York City of 2013 might be initially confused, but would quickly adapt once they learned the new politically views that they were expected to hold and the phone numbers that they could call to inform on their neighbors.

If Moscow has become more like New York City, New York City has also become more like Moscow. In ten years, it may be easier to buy a McDonalds burger in Moscow than in New York. There were hints of this trend even then, as Robin Williams' character arrives at a posh party only to be stuck talking to a woman who teaches Marxism-Leninism. While the circus performers of the Communist paradise wanted nothing more than 30 minutes in New York, many New Yorkers wanted nothing more than to turn New York City into Moscow on the Hudson.

At the climax of "Moscow on the Hudson", a debate over the choice between order and freedom in a Brooklyn diner on the Fourth of July ends with quotes from the Declaration of Independence recited by a diverse cast of immigrants and a man walking off into the night carrying a sparkler in his hand. The sparkler however has been banned in the entire state since 1997. Governor Andrew Cuomo recently vetoed a bill that would have legalized sparklers at the urging of Mayor Bloomberg.

“The governor believes that safety comes first,” his spokesman said. So much for life, liberty and the pursuit of happiness.

The multicultural island where everyone embraces the ethos of freedom is a cinematic pipe dream. It was a fading memory even in the 80s. In the 90s, Giuliani made New York safe again. In the 00s, Bloomberg made it bankrupt and boring.

Bloomingdale's filed for bankruptcy around the fall of the Soviet Union. Five years after the movie aired, it was already making plans to open stores in Moscow. In 1989, Pravda reported that Soviet goods would be sold in its flagship Manhattan store and a Bloomingdale's would open in Moscow. That never did happen, either under Communism or after it, and the American big retail store model has only been getting shakier ever since.

Washington is the only city where the average household income stretches far enough to afford a new car. It is the only city where incomes have been growing as if there were no recession. It and its surrounding bedroom communities have become glutted on the wealth of a nation as America's instructors of Marxism-Leninism have discovered that you can have both the red blazer and the red flag.

Like Russians in the 1910s, Americans in the 2010s, are becoming more comfortable with the rhetoric of redistribution and a strong central government that will provide them with stale bread in exchange for their freedom. "What good is freedom?" is the question being asked in every sphere of life and the answer is rarely positive. 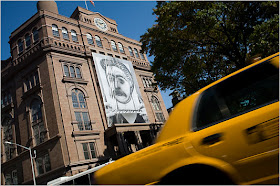 If giving up freedom can get you cheaper health insurance, fewer school shootings and less worries about the future, then who needs it anyway?

During the Cold War, many Russians and Chinese saw an America where you could live like a king and Americans saw a Soviet Union where the government took care of you. The old Communist countries have remade themselves into totalitarian capitalist entities where you can make a lot of money and never have to read the writings of Lenin or Mao, so long as you don't challenge those in charge. America is remaking itself into a totalitarian Socialist entity where the government will take care of you, badly, and where you are expected to read the politically correct indoctrination of the day and where you had better not challenge those in charge.

Russia and China have not become that much more free, but America has become far less free. Many of its immigrants have not embraced an ethos that traded order for freedom, but instead they want what the Russians wanted, the glitzy wealth of Bloomingdale's with the security of a Socialist state. Those two things do not go together. Instead what they have gotten is an oligarchy running up huge bills on their credit to pay for everything under leaders who sound less like America and more like Moscow.
Daniel Greenfield at March 05, 2013
Share