The Arab Street Is Still Angry

Much like Festivus, American diplomacy to the Middle East usually begins with an airing of grievances. These are not the American grievances over decades of terrorism and acts of violent hatred. These are the grievances that are supposedly infuriating the Arab Street. The list begins with Israel, continues on to the “Arab Dictators” supported by America and concludes with warnings to respect Mohammed by not making any cartoons or movies about him. 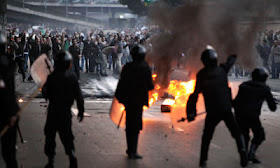 During his first term, Obama kept his distance from Israel, locked up a Christian who made a movie about Mohammed and withdrew his support from the Arab Dictators. The street should have been happy, but now it's angrier than ever. And much of that anger is directed at America.

Mohamed El Baradei, once the administration's choice to take over Egypt, has refused to meet with Secretary of State John Kerry. Joining him in this boycott is much of Egypt's liberal opposition.

The American foreign policy error was to assume that the political grievances of the Arab Street could be appeased with democracy. They can't be. The various factions are not truly interested in open elections. What they want is for America to elevate their faction and only their faction to power. When that doesn't happen, they denounce the government as an American puppet and warn of the great and terrible anger of the Arab Street if America doesn't make them its puppet instead.

Democracy is no solution, because none of the factions really wanted democracy for its own sake. They wanted it only as a tool to help them win. Now that the tool has failed most of them, they don't care for it anymore. And the Islamists who benefited from democracy have no enduring commitment to it. Like all the other factions, they see it as a tool. A means, not an end.

While the West views democracy as an end, the East sees it as only a means. The West believes in a system of populist power rotation. The East however is caught between a variety of totalitarian ideologies, including Islamists and local flavors of the left, who have no interest in power rotation except as a temporary strategy for total victory.

There is no actual solution to the Arab Street that will please all sides and keep their hatred of America down to a dull roar. Whichever side the United States of America backs will leave the others full of fury. If the United States doesn't back a side but maintains good relations with the government, it will still be accused of backing that government.

Trying to appease the fictional construct of an Arab Street that has clear and simple demands is a hopeless scenario. It's a Catch 22 mess where every move is ultimately a losing move, no matter how promising it initially appears to be.

There is no Arab Street. The real Arab Street is the overcrowded cities full of angry men with no jobs and lots of bigotry. Their hostility to the United States has nothing to do with the sordid politics that experts insist on bringing up to prove that the Muslim world hates us with good reason. Even if this history did not exist, the United States would be just as hated. The best evidence of that is that most of the accusations that enjoy popularity on the Arab Street are entirely imaginary. 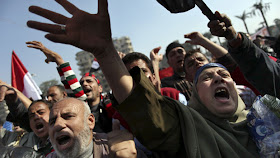 Demagogues can lead the street from bread riots to toppling governments, but what they cannot do is fix the underlying problems, let alone change the bigotry of people who blame all their problems on the foreigners, rather than on themselves. Each faction promises that the anger will subside and stability will return when it comes to power, but the anger will never go away because it's too convenient to blame America for everything. As long as America is around, no one in the Muslim world ever has to take responsibility for anything.

The United States has supported different factions in the Muslim world for the sake of stability. The latest of these is the Muslim Brotherhood. With terrorism from the religion whose name none dare speak running rampant across the world, the Muslim Brotherhood was supposed to pacify the violence by showing that Islamists could come to power without flying planes into buildings.

While Washington was culpable in supporting the Muslim Brotherhood, the Egyptian opposition was far more culpable for forming an alliance with the Brotherhood to overthrow Mubarak. The same Egyptian leftists who are warring with the Brotherhood now were assuring us two years ago that the Brotherhood would never come to power. They gave American policymakers and diplomats those same assurances and now they are condemning them for taking them at their word.

El Baradei was entirely willing to ride the Muslim Brotherhood's numbers to the presidency. Instead the Muslim Brotherhood rode him and then rode over him. Now El Baradei, who applied eagerly for the job of being America's puppet, is denouncing America for supporting a puppet government. America is, if anything, more the puppet of the Muslim Brotherhood than the other way around, but accusations of evil puppetry are as common a theme in the politics of the Middle East as giant puppet displays are at leftist protests in America.

Every faction in the game understands that America's goal is to achieve regional stability while ending the anger and hatred directed at it. Stating a vulnerable goal in the region is a piece of tactical clumsiness that leads the opposition to promote instability and spread anger toward America because they know that is what it fears. And so the very act of defining a "love and peace" goal not only makes attaining it completely and utterly impossible, but actually leads to the very opposite result.

Much as respecting human shields actually promotes the use of that tactic by terrorists, aiming for stability leads to instability. And so every American diplomatic initiative ends with an angry Arab Street and no peace in sight. Every American diplomatic visit leads to a choice that is bound to make America unpopular with everyone no matter what choice it makes.

The United States withdrew its support from Mubarak because it did not want to support a leader whom the proverbial Arab Street hated, but now it is stuck supporting another leader whom the Street hates. After all that effort and the sacrifice of national interests, the United States finds itself right back where it started in terms of the angry Arab Street, even while its strategic interests have taken a beating. 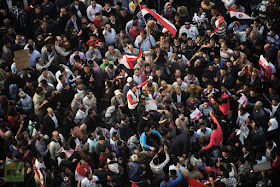 As the past year has shown us, the Muslim Brotherhood is not capable of bringing stability to Egypt, let alone the region. It is a violent sectarian organization incapable of running the country without resorting to violence. And while that alone does not distinguish it, its inherent Islamist tendencies do. Refusing to support the Muslim Brotherhood should not however lead to any further fallacies about freedom and democracy. These two attributes are not about to arrive in Egypt in any enduring form.

A chaotic Egypt will likely drift into one kind of tyranny or another. The United States should stay out of the process, providing no support to any of the factions, until a stable non-Islamist government that is willing to cooperate with the United States on security issues arises. That should be the only American criteria with respect to who rules or misrules Egypt.

The Arab Street is not America's problem. It is the problem of those who wish to rule it. If the Egyptian people truly wish democracy, then they will fight for it and obtain it without our support. If they do not, that is also their business.

America's interests in Egypt do not involve waging a democracy crusade, but keeping heavy firepower, a large population and nuclear technology out of the hands of our enemies.
Daniel Greenfield at March 03, 2013
Share