All The Difference in the World

Secretary of State Hillary Clinton arrived back in the Senate, after dodging a few falling safes, multiple banana peels and an ornery dog named Henry, to give a carefully prepared histrionic rant which can be summed up, "I do care a lot" and "None of this was my fault" and "What difference at this point does it make?"

The last isn't a sarcastic restatement. It's what she actually said. 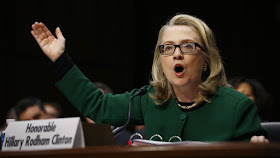 It might make a difference to a Coptic Christian whose trailer was blamed by the leader of the free world for a series of Al Qaeda attacks against American diplomatic facilities and who was sent to prison on the orders of members of the administration.

That fellow of many names, now serving a year in prison, is the only one to actually get locked up. The ringleader of the attack walks the streets of Benghazi freely. A drone could make short work of him, but no drones are coming his way. Instead a car bomb, planted by Libyan enemies nearly took him out. Some of the other Benghazi attackers were killed by the Algerian military during the siege; doing the work that Obama won't do. If the Benghazi terrorists finally die, it will most likely be at the hands of the French, the Syrian army or Libyan rival militias.

Benghazi, Obama said, during his appearance with Jon Stewart, the man of many grimaces, was a bump in the road. And that's all it was. The Obama campaign bus drove over four bodies and reached its destination in an armored parking garage somewhere in D.C. An irritated Hillary Clinton, who is prepping for her own bus tour in 2016, has every reason to demand to know what difference it makes now to discuss who lied about what and who failed to secure the Benghazi mission.

The election is over, and her testimony was delayed until after the fat lady held up her talking points at the debate and sang. Al Qaeda is dead, except for the parts of it rampaging across Syria, Iraq, Mali, Libya, Algeria and Pakistan, and a decade of war is coming to an end or just beginning. It makes no difference now which one of those it really is, just as it makes no difference, whether, as Clinton said, it happened "because of a protest or was it because of guys out for a walk one night decided to go kill some Americans?"

Dead is dead. The Benghazi four are dead. Stability in the Middle East is dead. Hope is dead. Victory is dead. It's time to discuss the serious stuff. Like finding the right title for Hillary's next biography, ghost-written and set for release around 2015, right after the Dems suffer a Congressional setback from angry NRA voters and just before the next election to position her as the new voice of hope.

"Bumps in the road" is one option. It really communicates that Hillary has been through a lot and driven over a lot of hard roads full of potholes and people who were only there because the Republicans refused to fully fund her infrastructure and outreach programs. But "What Difference Does It Make?" best captures the zeitgeist of the time. That sense that nothing matters once you've won.

What Difference Does It Make?: Hillary Clinton in Peace and War" will show up on shelves with a cover of her in some distant country looking out at the exotic landscape or surrounded by properly foreign children. It will be packaged along with a public speaking tour of colleges as Hillary promises to teach the leaders of tomorrow how they too can make a difference her way. The tour will use up Hillary's store of funny and inspiring stories from her meetings with foreign leaders and human rights activists, most of which will be made up, but what difference does it make?

Everyone will pretend to be inspired by her. Suddenly it will be of paramount importance (circa 2015) that young women have a president of their own to look up to. It'll all be fake, like her career, but what difference does that make. The real campaign slogan, at this point, might as well be, "Hillary, why not?" and "You know it's going to happen anyway."

Over in Cairo, leading senators visited Egypt's Muslim Brotherhood President, Mohammed Morsi and tried to explain to him that ranting about Jews being the bloodthirsty spawn of apes and pigs who must be driven out of the Middle East is “inappropriate” if he expects to be considered a force for stability in the region. In response, Morsi told the senators that he respects all religions and that the only reason the New York Times belatedly mentioned the story a month later is because the apes and pigs control the media.

Afterward Senator McCain called for $480 million in economic aid to the Morsi regime and Obama sent him a bunch of tanks and jets, because really what difference does it make? 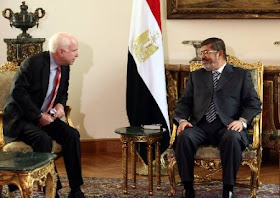 Morsi knows that he can say whatever he pleases and still get the F-16s and Abrams tanks and the billions of dollars in aid, and so it makes no difference at all what he says.

Sure at some point in the near or distant future, Morsi might use those weapons to, "free the land from the filth of the Jews”. And then the Christians. And when that happens, someone will sit down in front of a Senate panel and explain that they really do care a lot, that it wasn't their fault and that assigning blame makes no difference at this point.

Much as it might be nice to think that if Obama wasn't in office, that we wouldn't be sending planes and tanks and money to Morsi, that's wishful thinking. McCain would have embraced the Arab Spring in the White House, the way that he embraced it in the Senate. He would have bombed Libya and would probably have been bombing Syria last year. Romney might not have backed the overthrow of the Egyptian government if he had won in '08, but he would still be shipping the same goodies to Morsi in the name of maintaining regional stability if he had taken his inauguration oath this week. The difference is that unlike Obama, he wouldn't have known what he was doing or why.

Hillary Clinton knows it quite well. Most of her stories may as fake as her biographies, past and present, but she's served in the Senate and hung out in the White House. And if McCain had won, she would be sitting on a panel blasting whatever hapless McCain appointee was holding down the SOS desk for failing to properly secure whatever half-assed intelligence operation was taking place there.

This mutual hypocrisy makes any genuine concern difficult to sustain. It reduces all hearings to bouts of political investigations, to prospective 2016 candidates shouting at each other over what they would have done. And then there's nothing left, but to ask what difference would it make if she had secured the Benghazi mission, if Obama had dispatched timely rescue forces or if we had stayed the hell out of Libya. If would have made a large difference to the dead, but not a whole lot to Hillary 2016.

France is fighting in Mali now and it's getting about as much support from Washington, as the dead of Benghazi did. The drones aren't flying here either and neither is much of anything else. Obama Inc's people have said that they support the French operation but that they're still waiting to get a "clear picture" of the mission, the enemy and how much this will offend the Morsis of the Muslim world.

The quest for a clear picture was also the pitch made by Hillary Clinton, Susan Rice and Barack Obama whenever they were asked about the Great YouTube Trailer Terrorist Attacks of 2012. What some cynical people might see as lies or calculation inaction, was just an effort to fiddle with the rabbit ears of intelligence agencies to get a clearer picture.

The picture will never come in crystal clear, but then it's not meant to. Like one of those artfully stylized big box TVs showing test patterns in the window displays of retro boutiques, it just adds a little style and mystery to the careers of those responsible. The real story will go on dripping out bit by bit, and it will go on not making a difference.

This really isn't about Benghazi, which could have been secured for a fraction of the $16 million that her State Department spent on overpriced Kindle book readers and the $4.5 million it spent on art in embassies. You could have dropped the cost for fully protecting the Benghazi mission into the billion that State spent on global warming. Or the dough that Howard Gutman, campaign contributor and Ambassador to Belgium who shares some of Morsi's views, spent renovating his embassy into a shining example of Green Sustainableness could have instead been spent on fortifying the mission.

This isn't even about Hillary 2016. It's about the Middle East where bad policies make a world of difference. And it's about a political establishment that rewards the Hillary Clintons for the disasters they make while punishing the Michele Bachmanns for the truth that they tell, because it is unable to come to terms with its own mistakes.

Carter gave us the Mullah-ridden Iran and began pouring money into the Pakistani terror machine of the ISI. Obama gave us a North Africa that is beginning to look like Iran and has shoved handfuls of cash, weapons and support at any Islamist whose views and affiliations stop just short of Al Qaeda, even if he happens to be Al Qaeda's best friend. 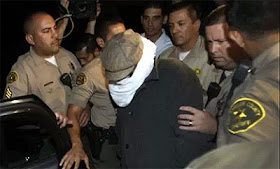 Crimes don't make a difference unless there are people who can expose them for what they are. Many of the things that we consider unacceptable behavior today had to be criminalized.Democrats have criminalized many ordinary things, such as buying cough syrup without a photo ID or making a movie that offends Muslims, but they have decriminalized other things, such as funding and arming terrorists and endangering the survival of the free world.

Reversing this process and reversing Hillary 2016 requires men and women who can show why what happened in Benghazi, in Cairo and across the region makes a difference. Why it's more than just another random occurrence that can be shelved until the end of time when the clear picture that Susan Rice, Hillary Clinton and assorted administration officials talk about finally develops. It will make a  difference when there are enough people who realize that in the last four years, these policies have made all the difference in the world and paved the way for replacing the war of drones and hijackers with a global war on the scale of the first two.

Then the difference that Hillary dismissed and that her colleagues in Obama Inc. have held at bay for another four years will finally be made.
Daniel Greenfield at January 23, 2013
Share