There are as many ways to look at a man as there are at a glass of water. Either half empty or half full. Either people are basically good or they are basically rotten. And all theories of government come down to one view or the other. 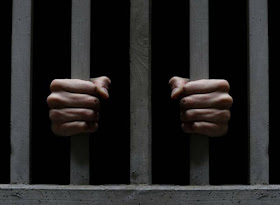 If people are basically good, then they can also be left to their own devices. They may even be allowed to run their own affairs. If however they are basically rotten, then a system is needed that will force goodness on them. And this system's own goodness will be protected by strict conformity to an ideology that is also inherently good. Those who run the system can only be chosen from the ranks of the faithful adherents of that ideology.

Arguments for goodness or "badness" are wholly anecdotal. And always have been. A man walks into a school and murders children. A man throws himself under a car to save a woman. Which of them is a definite commentary on the species or the culture? That's a matter of picking and choosing. Both are arguably exceptions to the rule. But on the whole we have far more people who do not shoot anyone than those who do. Far more who do not steal, than steal. Far more who may not wear a halo, or that we would want to share a long train ride with, but who on the whole could be trusted not to turn on their neighbors if one day every police department within a 100 miles folds up shop.

Gun control, like most liberal social legislation, is a barometer for the state of the human glass. It is a Rorschach test for how we see others. This week's MSNBC commentary has been the usual notes about the paranoia of gun owners. But if there is gun owner paranoia about being attacked, it seems to be outmatched by the paranoia of gun controllers who believe that every gun owner is a ticking time bomb. Or pretend to believe it when the red light turns on and the commercial break ends.

"How much firepower does a law-abiding gun owner need?" is the leading talking point of the gun controllers. But it could just as well be, "How much cold medicine does a law-abiding sneezer need?" Cold medicine has been regulated to the extent that you need a photo ID if your nose is stuffed up under a bill sponsored by a community organizer from Chicago who stayed briefly in the Senate on his way to bigger and worse things. And people have been arrested for buying too much cold medicine.

We have come a long way from the muckrakers who headed downtown from their cozy digs, toting along heavy cameras and notebooks to document the conditions there. And proposed reforms. Some of the reforms were even salutary. Others were cruel and capricious. The reformers saw to it that a woman walking alone in 19th Century New York City could be arrested for prostitution. Because if you believe that people are basically bad... then you already know the rest of the story whether it's cold medicines, guns or a woman walking down the street.

When you dig up enough dirt, then everyone looks dirty and the justification is there for a mandatory clean-up program. That is what the reformers and the muckrakers accomplished by displaying an image of a broken society. Their work was selective and biased, and they insisted on defining the city by its worst parts, and the entire country by the city. Their grand achievements have culminated in a national system of one-size-fits-all legislation. Lanza is America. America is Lanza.

Mayor Bloomberg is right that New York City has a problem with gun violence, but it's not a problem caused by guns. Still talking about guns is easier than talking about shooters. Urban mayors are waging war on gun shops in more rural and better behaved parts of the country as if urban social problems come from those gun shops, when if anything it's the other way around.

Periods of urban social malaise are routinely followed by vigorous reform efforts by mayors who break free of machine politics and forcibly assert control over the physical and social landscape of the city. Bloomberg is a particularly poor follow-up to men like LaGuardia or Giuliani, but he's following the same pattern of trying to perfect the city by turning it into a perfect prison. And unlike LaGuardia or Giuliani, Bloomberg is trying to take his perfect prison campaign national. 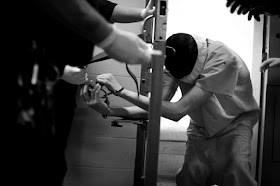 Bloomberg is a living model of the glass half-full theory of human behavior. This is after all a man who banned large sodas, and if you can't trust people to have large sodas, then you can't trust them to have cold medicines, let alone guns. Where does it end? It ends the same place it ends in a prison. Nowhere. If you believe that people are basically bad, then every problem you identify is met with another control measure until you control absolutely everything.

With a big city politician in the White House, for the first time in a long time, the progressive impulse to extend that total net of control over everything and everyone seems to have come together. The old urban muckrakers became sociologists and community activists and then community organizers all over again in the great circle of rich kid busybodying. They are still looking for the worst possible examples of human behavior to justify total crackdowns on everything and everyone.

Fix the social problems by fixing the people. Fix the people by controlling their environment. Total control for total social morality. The social missionaries became social activists. The social activists have become social despots. Their single ability resides in documenting a condition, generalizing it and then crowding the cameras and newspapers and demanding immediate action. And they have gotten it over and over again. And we are much worse for it.

Most cities are once again trending downhill. A century ago the cities were centers of industry and commerce. Now they are warehouses for the poor who have no jobs and will never have jobs. The progressives cleaned up some of the messes and replaced them with static broken systems deep in debt and with no hope of a future. And that is their plan for the rest of the country.

The cities are chock full of laws but not law abiding. There are three classes of people in this perfect prison. The working lower, middle and upper, classes who care about the law. The welfare classes who care nothing for the law. And the upper upper classes who buy their way out of the law.

Meth will go on being cooked, regardless of how often Joe Q. Public is forced to show his photo ID at the pharmacy. Schools will go on being shot up no matter how many assault rifle bans are passed.  Most cops still know that law enforcement is small scale, it's about what you do on one block, not about the big picture press conferences and proposals. But those still keep coming along with the dream of a magic social bullet. A way to fix the problem at the source. A perfect prison that will finally work. 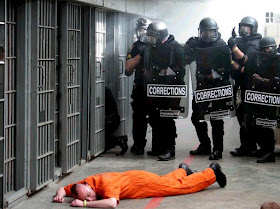 The magic bullets are all about bigger scale crackdowns. Bigger laws and bigger prisons. Don't bust meth dealers, outlaw cold medicines. Don't bust gangbangers, bust the gun industry. It's the type of thinking that exemplifies college smarts over real world smarts. Real world smarts says you have to get dirty to fix a problem and then you have to go on fixing it day after day while accepting that it will never really be fixed. College smarts says that a problem that has to be fixed over and over again is bad design and has to be put under a microscope so that it can be fixed once and for all.

Under the microscope everyone is bad. In the big picture, everyone is the problem. We're all to blame because we're all one social organism. Why bother building prisons for individuals who are only the victims of society, the victims of us all, when a prison can be built for all of us instead? Free the criminals and the mental patients, and put everyone under the same regime as them. Turn every city into a prison and then turn the country into a prison. That's big picture thinking. That's college smarts.

If people are mostly bad, then the place for them is in a prison and the entire country needs to be one big prison complete with millions of armed guards, countless administrators and rules, where every man, woman and child must account for everything that they do to someone. The state becomes a prison and the prison becomes the state.
Daniel Greenfield at December 22, 2012
Share