Obama and Morsi: Separated at Birth

In Cairo, Morsi scribbles his decrees and in Washington DC, Obama scribbles his. There is an ocean between the two men, but there is a good deal that they have in common. Both are ideologues who piggybacked on public outrage over the national impact of international economic declines to climb to power and pursue their true agendas. 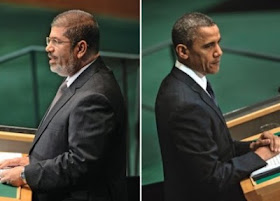 Without worries about the price of bread, the odds are good that Mubarak would be sitting in his old place and Morsi would be looking over the latest economic reports from the Brotherhood's business networks and front groups. And without a sharp decline in American living standards, Mubarak would be receiving phone calls from President McCain urging him to democratize Egypt, while Obama would be rallying the troops at the latest SEIU event for taking back Congress.

Times of crisis are political hunting grounds for extremist groups whose ideologies would otherwise be unpalatable. Angry people are more willing to accept the previously unacceptable to shake up the system and punish those that they blame for their economic situation. They are in the long run, only punishing themselves, but the long run rarely wins elections. The short run however is the all-time ballot box winner.

But the problem with running on the old Bolshy platform of "Land, Bread and Peace" is that the people eventually expect you to deliver at least two of three. And ideologues are not interested in empowering people. They will hand out subsidized freebies to their supporters to win elections, but they won't empower them economically, outside their network of subsidies, and peace is never on the table with folks who believe utopia is just a hundred years of war away.

There is a point midway between the cheering for hope and change, and the complete consolidation of power in the hands of a tyrannical system when the tyrant is vulnerable. That window is the one that opens when the people begin realizing that there is no land, bread or peace on the horizon. Their eyes haven't opened, but their patience has run out.

Morsi has tried to cut the duration of the window as narrowly as possibly by moving quickly to consolidate his power, but that brought on a second crisis and a wave of popular protests. Triggering those protests prematurely may have been his plan, but that plan may have also backfired. The only way to tell will be retroactively.

Obama's ObamaCare power grab was generally held to be premature, but even though the majority continues to oppose it, the man behind the program survived an election thanks to a hurricane and plenty of voter fraud. Morsi may similarly be able to survive his own power grab. An Islamist is, if nothing else, absolutely immune from the sort of human emotions that animate normal leaders.

The advantage of being an ideologue is that you simply do not care what infidels think and anyone who is not a member of your mental club is an infidel. Transnationalists, whether of the leftist or Islamist flavor, are men who live without a country. Their country is an imaginary global utopia, the infinite Reich of dreams, the Caliphate of their conspiracies and the World Revolution that can never be.

That disregard is what allows men like Obama and Morsi to survive the widespread hatred and contempt of a country, to sneeringly dismiss it, and get on with the program of taking it over. Bush and Mubarak could be hurt by how their own countrymen saw them. But Obama is not an American and Morsi is not an Egyptian. Obama is a Progressive and Morsi is an Islamist. Their approach to anyone outside that circle is limited to distinguishing between potential converts and useful idiots. 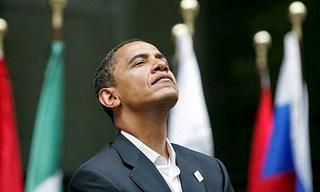 Bad leaders can be protested out of office. Ideologues can only be forced out of office. And that isn't easy. Any movement with enough money, skills and leverage to take their man all the way to the top is not going to fold just because the streets are full of protesters or because legal action is being taken against them. The cadre of such movements consists of men with no regard for any of laws of a society and who are entirely willing to destroy a country rather than give it up.

America in the 1950s briefly woke up to the fact that any measure had to be taken to keep the Reds away from power... or there would be no America left. Egyptians understood this about the Muslim Brotherhood all along and took many of those measures, until we forced Egypt to dismantle its defenses, as we dismantled our own. Obama and Morsi are the consequences of that unilateral disarmament.

Obama and Morsi are not individuals, they are the representatives of political movements that have spent the better part of a century clambering to power. Their brushes with the law have made them cunning and their rise to power after so long have fed their sense of historical destiny. To them these are more than momentary political triumphs, but the culmination of history. They do not see ballot boxes, but the inevitable march of progress and prophecy that must be fulfilled by any means necessary.

It is not surprising that Obama and Morsi, two men who hail from the same continent and a related cultural milieu, have gotten along so well with one another. Their interests do not precisely align, but they can appreciate a colleague working in the same field of revolution. But the mutual friendship may prove to be more harmful to Morsi than to Obama.

While conservatives and counterjihadists denounce Obama for his support for Morsi, until Morsi goes the way of Iran and begins seizing American hostages, most Americans will simply not care. Egyptians, on the other hand,  like most of the region, have the usual Anti-American instincts and the same Gaza ceasefire that won Morsi a blank check from Obama to do as he wished domestically also convinced many Egyptians that Morsi was Obama's poodle.

The same window that prevents Morsi from exerting total control over the country, also prevents him from making a complete break with America. Morsi needed Obama to bail out the Egyptian economy and now Obama is dragging Morsi down. Positive views of America fell to 19 percent in Egypt in 2012 making Anti-Americanism into a viable proposition. Not that it ever wasn't.

Morsi however also has the same ace in the deck as Obama. Class warfare. Islamists reliably draw their support from the poor. The Muslim Brotherhood's background was linked to feudal landholders, but it has successfully reinvented itself as the party of the rural fellaheen. The flow of the rural poor into Turkey's major cities allowed the Islamist AKP to take over Turkey. And Morsi is not proposing a referendum because he expects to lose.

Americans weren't ready for a reversal after four years. Will Egyptians be ready to cast down Morsi after a much shorter period?

Obama's work has taken longer and gone slower because there is much more of it to do. America started out at a higher point than Egypt and it will take it a while to hit bottom. Morsi has less to dismantle and is working against lower expectations in a country where freedom is a slogan, not a tangible experience.

The 21st Century has been surprisingly good to Islamists and leftists. The fall of the Soviet Union opened a power vacuum that the Islamists filled and allowed the left to sell its agenda in a world where the gulag was no longer a relevant term. Of the two groups the leftists have a shorter future, at least in areas that fall under Islamist control, but their Islamist alliances have also given them a new lease on life. 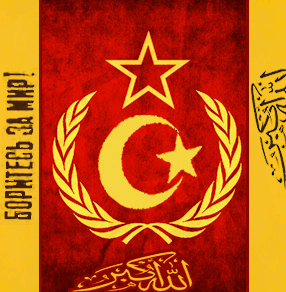 The leftists have taught class warfare to the Islamists and the Islamists have revived the left's critiques of foreign policy as imperialism by providing them with a global identity group that fills the hole left behind by the end of the Cold War. It is not surprising then to see Obama and Morsi working so well together... or following the same path.

Transnationalist movements are predatory. They strike at a weak period in a nation's history with the aim of tearing apart the country. But a country so weak and dissolute as to remain under the dominion of transnationalist movements is also too corrupted to be very much use. The Communists could never make much of Russia or China. It took a transition to capitalism to do that. And the only thing that transnationalists will be able to make of America or Egypt is to harness both countries for the sheer manpower and the leftover weapons.

Obama, Morsi and the forces behind them have power, but they have no future. Their reign can only end in one of two ways. Either the country becomes vigorous enough to cast them off and rebuild, or it will not, and the Islamists and the leftists will go down into the darkness with it. Every utopian dream sooner or later ends in a nightmare. The question is whether it will be a nightmare only for the leftist and Islamist movements or for the countries that they take over.
Daniel Greenfield at December 06, 2012
Share