Blasphemy as a National Security Threat

Spain has begun deportation proceedings against Imran Firasat, a Christian refugee from Pakistan, for making a documentary about Mohammed and thereby threatening the national security of Spain. If Firasat is deported back to Pakistan, he will face the death penalty proving that it's a short step from the Spanish Inquisition to the Pakistani Inquisition. 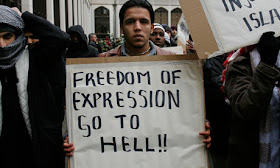 The United States has a man sitting in prison for making another blasphemous movie, which the government spent weeks blaming for worldwide attacks on American embassies. And he isn't the first man persecuted or prosecuted for offending Islam. Offending Islam has become a national security issue involving all levels of government.

When Bubba the Love Sponge, a Tampa DJ, proposed to burn a Koran, the commander of the Afghanistan war contacted his girlfriend, who would later be stalked by Petraeus' girlfriend, to contact the Mayor of Tampa to keep Bubba from burning a Koran. Instead of explaining how the American system works to the Lebanese temptress and her four-star general, the mayor wrote back that the city was working on it.

That month 50 percent more Americans were killed in Afghanistan in the long slow death march of the war, but a Koran was not burned in Tampa. Mission accomplished.

Muslims did not have to kill a great number of Americans to enforce blasphemy law in this country. Counting the various reactions to burnt Korans, rumors of a flushed Koran and assorted things of that nature, the number is still well below a hundred. Even counting every casualty in the war from September 11 onward, it took fewer deaths to make the United States give up on the Bill of Rights than it took to liberate it in the War of Independence.

But it's not really about the deaths, if it were then the United States wouldn't be senselessly squandering the lives of American soldiers in Afghanistan to avoid offending the natives. It's not the death of men that our leaders are worried about, but the death of stability.

Knowing that a hundred men will die today in car accidents does not alarm anyone, but knowing that somewhere a dozen men might die in a bomb explosion, anywhere and at any time, can bring a nations to its knees. That is the difference between predictable and unpredictable death. Predictable death makes it possible for most everyone to go about doing what they normally do. Unpredictable death however erodes daily order.

Blasphemy makes terrorism seem predictable. It delivers that false sense of control that is at the root of Stockholm Syndrome, the seductive illusion that the thug can be reasoned with and that we can restore control over our perilous environment by accepting responsibility for the enemy's violence. If we meet a set of conditions then we will have peace. And what kind of lunatic wouldn't want peace? The kind who needs to be deported or locked up in the name of peace.

When an entire country goes Stockholm then it is no longer interested in winning the war, only in surviving the peace. In a Stockholm country, national security consists of locking up anyone who can be blamed for sabotaging the peacemaking. The less peace there is, the more the peacemakers go on the hunt for "extremists" who are to blame for the lack of it. The more their vision of a better world fails, the more stern measures they must take against their own people. Peace is always one more denunciation of extremism away.

The same countries whose leaders have spent a century and a half blathering incessantly about a truly progressive order under international law have shown no ability to cope with the old-fashioned kind of war. They can quote verbatim the laws of war, but understand poorly that war makes its own laws. War's simplest law is that you pick a pretext, any popular pretext, make your demands and then go on the attack. If the other side is foolish enough to meet your demands, then it has shown its weakness and must be attacked again and again.

Muslims have restored blasphemy prosecutions to the United States and Europe through violence. Like Khrushchev banging his shoe on the United Nations delegate desk, they did their best to convince the rest of the world that they were violently irrational and liable to do all sorts of things if their demands weren't met. And their demands were met. Rather than going medieval on their asses, the civilized world instead went medieval on anyone who offended the medieval cult of Islam.

Muslim blasphemy, like the ghetto hood's respect is an assertion of supremacy by identity. It isn't a grievance, it's a right of violence, and if you give into it, then you accept the inferior status that comes from being weak in a system where might makes right and killing people, or threatening to, is what makes one man better than another. 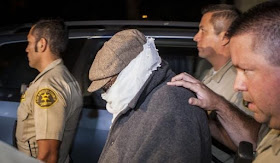 Islam is submission. If you submit to Islam, then you're a Muslim. If you submit to a Muslim, then you're a slave. The western blasphemy trial is not the enforced submission of an Islamic legal system that would be crude and brutal, but at least comparatively respectable, it is the enforced submission to Muslim violence. The judges who preside over our blasphemy cases do not believe in Islam, they believe in the danger of Muslim violence. This is not theocracy, it is slavery.

For the moment blasphemy prosecutions still involve trying offenders on some charge other than the obvious one. Low-hanging fruit like Imran Firasat or Mark Youssef are the easiest to deal with. Any man whose freedom depends on the whim of a judge can already be locked up or deported any time without the need for actual charges of heresy to be brought. When that isn't possible, there is always the ubiquitous hate crime which increasingly extends to anything that offends anyone regardless of consequences or intent.

These trials are a contradiction, 21st Century legal codes built on sensitivity and tolerance being used to prosecute deviations from a medieval code of insensitivity and intolerance. But that very same contradiction runs through the modern state's entire approach to Islam. It is impossible to embrace medievalism without becoming medieval. The need to accommodate Islamic medievalism is forcing the medievalization of the modern world's political and legal systems.

Trapped in a long-term war, our leaders are looking for ways of making the conflict more manageable. If they can't win the war, they can at least limit the number of attacks. It's not the open book kind of appeasement, but the double book kind. The open book is still patriotic, but the second book in the bottom drawer is running payments to the terrorists and finding ways to accommodate them. And anyone who runs afoul of the second book, also runs afoul of national security.

War often compromises freedoms, but it rarely compromises the freedom to hurt the enemy's feelings. But this is a different sort of war. A war with no enemies and no hope of victory. A war whose only hope is that one day our enemies will become better people and stop trying to kill us. Our enemies are fighting to take away our freedoms and we are fighting to take away our own freedoms in the hopes that if we give up some of them to the enemy, he will settle for them and give up on the rest.

In this sort of war, blasphemy is a serious national security threat, not because it truly is, but because our leaders desperately need their Stockholm control points of appeasement, they need to believe that if they crack down on Koran burnings then they can reduce the fighting by 5 percent or 8 percent and that gives them hope that they can one day reduce it by 100 percent.

The actual numbers don't matter. On the month after Bubba the Love Sponge did not burn the Koran, 50 percent more Americans died in Afghanistan, but the statisticians can always argue that if he had burned it, then 75 percent more or 100 percent more would have died. Islam runs on magical thinking and any effort to appease it must also embrace that same medieval magical thinking. Hoping that blasphemy prosecutions will reduce violence, is psychologically less of a strain than accepting that nothing will, that there is no magic bullet, only regular bullets.

The sort of men who deport filmmakers, when they aren't locking them up, and treat the stunts of shock jocks as a matter of national security, fail to understand that they are not fighting some vague notion of "extremism" which is fed by "extreme" language and actions, but an organized ideology whose goal is not merely preventing Bubba the Love Sponge from burning the Koran, but compelling the Mayor of Tampa and the American commander in Afghanistan to compel Bubba not to burn a Koran. 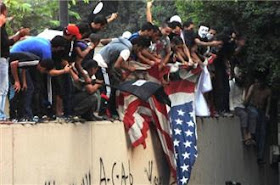 Islamists have not launched a thousand years war over Bubba; they have done it so that the cities and countries where Bubba and Imran live submit to Islam. Locking up filmmakers and warning off DJ's is not quite up to Saudi and Iranian standards of submission, but it's a start. Once the principle has been established, then the rest is a matter of negotiation. And the negotiations always begin and end with a bang.

America has lived under the law of faith, following the laws that it believed to be right. Islam conducts its affairs under the law of force, as it has since the days of Mohammed. American leaders are abandoning their laws of faith to force, giving up on freedom of speech to accommodate the violence of Islam, while forgetting that when you give up faith to force, then you also abandon any further reason to resist that force. Without faith, it is easier to let force win.
Daniel Greenfield at December 26, 2012
Share