The Paul Pot and the Paulestinians

The masses weeping over the death of Kim Jong Il and the frantic online defenders of Ron Paul have something in common, it isn't the man they care about. It's what he represents. 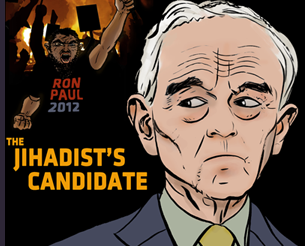 The course of events that took a cranky Texas congressman and turned him into the made man of a motley crew of online gambling entrepreneurs, racists, conspiracy theorists and the whole big circus tent filled with offshore accounts, UFO landing sites and copies of the Turner Diaries is an odd one, but not a completely unusual one.

Cults of personality are not about the man, but about the need that he fills in his followers. There is a point at which every dictator, rock star and celebrity realizes that it is the people who adore him that are in charge and all he can do is ride the wave of adulation. The men don't matter, the reasons why people seize on them do matter.

Why Ron Paul? Because like so many at the center of a cult of personality, he is everything to everyone. The big tent he presides over is full of people who don't agree on very much. They are a nexus of opposition to 'everything', but they're also a collection of groups that splinter faster than old wood in a thunderstorm.

Ron Paul's program which is big on ambitious assaults on the government, but short on the details, finesses many of those disagreements. Gay rights? Abortion? Immigration? If you squint and only pay attention to the right statements, then Ron Paul is for you. Like Santa's little elves, his followers spread his selective word by focusing in on target demographics and barraging them with talking points that make it seem like Ron Paul is on their side. Whose side is Ron Paul on? Most likely his own.

The left has no shortage of Ron Pauls in Congress, cranks and loons like Shirley Jackson Lee and Pete Stark. When they want to run the chief loon of their side who thinks that the government is beaming radio waves into their brain at the behest of the military industrial complex, they have Cynthia McKinney, the presidential candidate for the Green Party in 2008, who was endorsed by Ron Paul. But their pickings on the Republican side are slimmer. It's Ron Paul or it's nobody.

For all that the wonks insist on viewing America as a red and blue state lineup, there are a lot of other colors in the mix. More than the libertarians, most of whom have a limited comfort level with Paul, there are various flavors of anarchists, white supremacists, conspiracy theorists, and people who are even further off the map. They are a politically underserved demographic and while they won't win elections, they have the obsessive nature and the time to make a difference.

Ron Paul's broad appeal is that he promises to reduce the power of government and American power in general, and that's something everyone from Communists to Nazis, anarchists to monarchists can get behind. Revolutions begin with a broad front assault on the system and Ron Paul has ended up as the symbol of a broad front of those who see some political, financial or other benefit from taking down the system.

That's why Ron Paul's generic policy positions, which aside from drabs of paranoia are not all that distinguishable from many of his opponents, are not really the issue. His pet obsessions even less so except that they allow him to speak the language of his supporters and they make him completely irrelevant on most other issues.

Ron Paul can't speak intelligently on immigration because he's too busy preparing for the day when Americans start seeking refuge in Mexico. Addressing Islamic terrorism is out of the question for the same reason. The knee jerk reflex to weaken even legitimate areas of government responsibility isn't just destructive, it puts Paul in the position of denying that the problems even exist in order to justify resistance to government solutions.

If there's a problem that might require a government solution, then it's easier for Paul to claim that the problem only exists as part of a conspiracy to give the government more powers. This has been the standard response on the fringe to September 11 and is one reason why 9/11 Denial is so popular among the already paranoid.

Liberals decided that rather than dealing with the fact that a left-wing radical shot and killed JFK, they would build up elaborate conspiracy theories blaming the killing on the right. Everyone who found the idea of Muslim terrorists massacring thousands of Americans to be an uncomfortable fit with their ideology began finding ways to blame it on America. That's where Paul's left-right coalition against the war comes from. The New Left and Paleoconservatives came together to deny reality and found a common cause in maintaining a delusional worldview.

The marked difference between the European far right and the American far right is that the former have come face to face with the cold hard facts, while the latter are still acting as if the 21st century is an outgrowth of the early 20th and 19th centuries and must be fought on the same terms. That is another asset for Ron Paul who is in some ways a 19th century candidate still busy refighting the political wars of the past. A man who is too busy rebutting Alexander Hamilton doesn't have much to talk about anything truly dangerous.

Like a broken clock, Ron Paul is right about the unrestricted growth of Federal power, but for the wrong reasons. The United States isn't on a path to becoming the Fourth Reich, the time when that was at all possible is long gone. It is on a path to national dissolution, which happens to be Paul's program and makes his candidacy irrelevant. Centralization and spending aren't the problem, they're the symptoms of the problem which is a corrupt technocratic political culture that he is completely unequipped to address, not least because his own nose has been caught in the trough, but mostly because he isn't a leader.

Ron Paul is an ideologue who has made a career out of his ideology, whether it was in Congress or through his newsletters. Ideologues don't have a history of fixing systems, they have a history of breaking them in a different way. For all his talk of the Founders, they were men who weren't rooted to a single way of doing things. Hamilton, Jefferson and Madison had their fundamental differences, but none of them were so rooted in their way of thinking that they were unable to deal with reality. The closest period analogue to Paul is Thomas Paine, an English radical who was unable to accept the practical outcome of the American Revolution, and instead went seeking new revolutions in England and France. Ironically common sense is the one thing that Paine didn't have. It's the one thing that Paul badly lacks.

If there was a time for Ron Paul it would be now, in an election against a Democratic administration that has dramatically extended Federal power and created its own mini-tyranny. The problem is that Paul is just as unqualified and broken as Obama. Both men are products of rigid ideology who insist that applying it will fix all problems. They are both surrounded by cults of personality that elevate ordinary mediocre men into the avatars of hope and change.

No sooner does Ron Paul mumble a sentence in a debate then his followers plaster a dozen clips of it on YouTube under titles asserting that he "0WNED" Romney, Gingrich, Santorum or the solar system. The sad truth is that Ron Paul has never won a debate or made an articulate argument for anything. He's a shambling ideologue who has shot up only because every other Republican candidate except Huntsman and Santorum have had their moment in the sun. Paul isn't anyone's first choice, he's the fifth choice who isn't likely to win Iowa, let alone the nomination.

Paul's supporters have bought his son a senate seat and given papa a proper sendoff as the bugbear of the Republican Party. The level of devotion is completely detached from any actual accomplishment in the field of politics. But the same was true of Obama.

The chief beneficiaries of Obama's cult of personality were not the young people or minorities who streamed out to vote for him. As always they were the Obama clan and their close supporters. The same is true of Ron Paul who has sucked up a great deal of money that could have been better spent on a more articulate and promising spokesman for their cause. But just as the nature of what Obama really stood for began to disintegrate the moment he took office, so too the question of what Paul really stands for remains open.

The newsletters, which were an open book in the last election but which few of the panicked outlets now reporting on them as if they were fresh news chose to focus on, are the least of it. They represent one aspect of Ron Paul, the one that won him some of his hard core following, and his disavowal of them represents another, that of the politician who knows how to play different constituencies and show a difference face to different groups.

Who is the real Ron Paul? Like the real Obama it doesn't really matter. It's the people who have gathered behind him that are interesting. Their politics are primarily negative. They share a common paranoia and ruthlessness with Obama's supporters, but while Obama's supporters wanted power, they claim not to want it. And yet their campaigns have been exercises in seizing power, in media manipulation, intimidation and deception. There is no real difference between their tactics and those of their far-left, but we are to believe that there is a difference in goals.

That may be true, and yet the purpose of power is power. Those who seize power ultimately use it and revolutionaries who promise that their tactics will change once they are no longer insurgents are not to be believed. The most troubling thing about the Ron Paul campaign is not Ron Paul, but his supporters. It is they who define him more than he defines them. Their collective bum rush isn't just violent, it's simmering with a familiar paranoid cunning laced with bigotry, manipulation and lies. It's the behavior of people who believe they are entitled to power and will do anything to get it.

That is what defines the Ron Paul campaign more than the slight mumbling figure at the center of it. They are Ron Paul more than he is. In a sense Ron Paul is telling the truth when he says that he didn't write the newsletters. Even if he did write them in part or in whole, which is entirely possible, they were the ones that he was writing them for. That angry mass on the side eager to believe the worst and send out money to anyone who affirms their views. They are the same people with their crazy-quilt patchwork of ideologies that he is speaking to now. Their views may be internally irreconcilable, but as long as they have a common enemy in the system, they can overlook the differences and the inconsistencies and push forward without ever realizing that they are going nowhere because there is nowhere to go.
Daniel Greenfield at December 26, 2011
Share