The Trash of Islam

Two years ago the Egyptian city of Cairo, the largest city in the Arab world and the "timeless city" of Obama's Cairo speech, the heart of the Arab Spring, was suffering from a garbage crisis. The crisis had a very simple cause, the pigs that used to eat the garbage were killed to prevent the spread of Swine Flu. 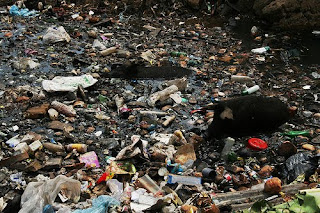 The pigs living in "Garbage City" had served as both organic garbage disposals and food sources for the Zabaleen, families of marginalized Christian Copts who made a living by collecting the garbage, reselling the inorganic garbage and feeding the organic garbage to pigs. The system worked fine so long as there were pigs, but without the pigs, Cairo's streets are filled with giant mounds of rotting garbage.

It might be shocking for most people to realize that the trash collection system for the largest city in the Arab world, the capital of what passes for Arab Muslim civilization, depended on a class of "untouchable" garbage collectors as young as eight years old, and their pigs to keep the city from drowning in its own garbage.

A system that is not simply medieval, but pre-medieval, that seems positively Bronze Age. But that is only because the Arab Muslim nations are not actually civilizations in the modern sense, they are post-colonized tribal clumpings with bits and pieces of borrowed governmental structures and technology that never quite work right. And underneath them is something far darker and more primitive, a miserably brutal and ruthless Levantine existence defined not by moral laws, but by tribal ones. And underneath them all are the pigs. Kill the pigs, and the system collapses.

It isn't just about the piles of reeking trash in Cairo's streets. The Arab and Muslim world has been exporting far more dangerous forms of waste in the forms of immigration and Islamic radicalism and we are their Zebaleen, the Christians and Jews who are expected to clean it up.

Virtually every Arab rulers balances the tension between national allegiance and Islamic law by exporting terrorism abroad, whether it is Arab governments funding suicide bombers in Israel, rabid mosques in Oslo and Manchester or Al Queda hijacked planes racing toward Manhattan-- the homelands of Islam have been calculatedly dumping the garbage they don't want on foreign shores.

"Don't fight a civil war, fight a global war", has been the anthem of the ruling families of Saudi Arabia, the UAE and numerous other Arab Muslim dictatorships, who extend one crooked hand to the West, and another to Islamic terrorists; dumping their exploding garbage in foreign laps. The more the angry young men with fierce shovel cut beards go abroad, hoping for a shot at an American GI or an Israeli family or a Thai Buddhist schoolteacher, the more the House of Saud can take a deep breath, count their oil revenues and buy another piece of Manhattan or London.

What they have developed is a cyclical system, much like Cairo's pig trash consumption, except this one exports terrorists abroad where they will pose less of a threat to the endless collection of Princes littering up the endless palaces of the oil rich Gulf states. Meanwhile the rulers themselves get to play moderates, offering their services to help moderate tensions, in exchange for the proper incentives of course. The benefits of the system allow them to live rich off their ill gotten oil gains, while treating the toxic waste of Islam as an export they can cash in on. 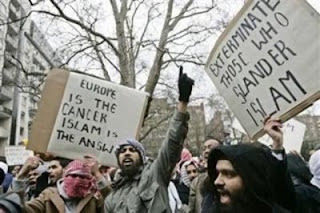 And then there's immigration. The West suffers from low birth rates. By contrast the Ummah suffers from an uncontrollably high one. Just enough Western medicine has poured into Muslim countries to help improve infant survival ratios and mortality rates... but the countries themselves can't even begin to handle the extra population. With much of their social and economic systems still stratified based on familial and tribal ties, bribe economies discouraging innovation and foreign investment, and long lists of Islamic Thou Shalt Nots, Muslim nations cannot accommodate their growing populations. And so instead they export them to the West.

And who is it that goes to the West? The huddled masses yearning to breathe free. Not quite. Huddled, perhaps. Yearning to breathe free, not so much. Immigration to the West allows the Muslim world to export those who have few opportunities at the bottom of the ladder or the sons of those at the middle or the top who have trouble fitting in. Very often those are exactly the type of people eager to listen to Jihad audiocassettes and seek out the angriest mosques. The types of people Egypt or Pakistan or Saudi would like to get rid of. Just more waste being dumped on Western shores.

It's a bad system, but in a civilization whose major city can be overrun by garbage because all the pigs have died, it's about as reliable as it gets. Muslim rulers export their waste, which the West seems to want, and in doing so by themselves a measure of immunity from Islamic terrorism, while investing in the possibility of a future Caliphate. Getting in on the ground floor of the Death of the West, so to speak. It's a win-win situation, until the pigs die of course.

From the perspective of the "moderate Muslims" that we keep hearing so much about, Bin Laden pushed the limit, upsetting the cycle and bringing war into their own backyard. The result overturned the system and broke the cycle. Too much too soon, was the watchword there. The "moderate Muslims" had no objections to thousands of murdered Americans and other foreigners. What they had an objection was exceeding the allowable tolerances of Americans and other foreigners for terrorism.

Their policy has been to build a Caliphate made of garbage, to turn Europe, America, Canada and Australia into towering trash dumps consisting of Islamic radicals and Muslim immigrants. Enough trash to build into minarets, mold and sculpt into Sharia law and bring an end to the West. And when that has happened, the moderate Muslim regimes of all the Terroristans and Islamabads fancy that they might be the ones left standing to take up the Mohammedan Man's Burden once again.

9/11 endangered their trash deliveries and woke up some in the West to what was being dumped on their front lawns. 7/7 rang even more alarm bells. Islamic conversions went up, but so did the status of people who had been talking all along about the dangers of immigration and Islamic radicalism. Push. Push-back. And with it comes the rising fear of an end to immigration. And if the Muslim world can't export its excess populations and Islamists to the West, where will they go?

Asian countries might send out their excess populations as labor contractors, but not even Muslim cities like Dubai are too keen on importing fellow Arabs to do the work, mainly because they know quite well that's a formula for insuring that no work will get done. And all those angry young men hanging around Cairo and Riyadh, reading tracts about getting back to authentic Koranic truths, and looking over bomb instructions are another kind of formula, a formula for Islamic regime change at home. Which is where the Arab Spring comes in. 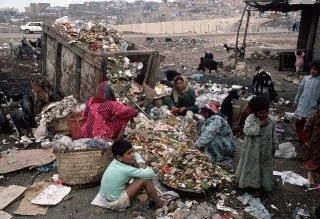 In Cairo, the trash piles stank. Worms and rats, and worse things made it their home. The cycle has been broken and there was no way to fix the system. True civilizations are tool users. Muslim civilizations are tool borrowers who layer text messaging and cell phones over institutions that would make the Dark Ages seem positively enlightened. There is no way such a system can accommodate real change, or provide opportunities for growing populations. There is no way it can do anything but dump the garbage on someone else's street and run away.

To talk of a Clash of Civilizations is in some ways futile, because there are no Islamic civilizations, only former colonies and splinters of former colonies, run by whoever was left in charge after the British or the French left, or whoever managed to clamber to power since then. And by their close relatives and friends, and by their son in laws, second cousins and good friends.

They call themselves Presidents, Ministers and Colonels. They have huge bank accounts and large scale investments abroad. They have a veneer of technology and cultivated manners. But the aerial shots of skyscrapers and urban lightscapes, storefronts and maps are a facade of civilization, like a well lit movie set. Underneath it all, there are still pigs eating the garbage.

Saddam's forces demonstrated the same inability to use his giant toybox of Soviet arms and tanks in two wars against the United States and its allies. Nor could any of his neighbors have done much better. Even Saddam himself understood this, and by the second war, fell back on the default tactic that the Arab world has used against Israel for the last 35 years, to go to ground and focus on hit and run raids, on terrorism and guerrilla warfare. To revert to the way of the bandit and the nomad, to shed any pretense of civilization and focus on pure murder and terror.

The rise of Islam is the manifestation of more than just frustration with Western civilization or globalism; but a frustration with their own incompetence at grasping and implementing the structures and achievements of those civilizations at home. Lusting after the glory of a worldwide Caliphate and the imaginary perfection of Islamic law, is the way that those who have failed at aping Western civilization can drown their inferiority complexes in rituals of blood and death.

Inwardly they know that there is no golden collection of Minarets ruled by a wise Caliph waiting for them at the end of the road. The virgins with their raisins are a better bet, because they are a more plausible endgame than the idea that even a few million Muslims could get along, let alone the whole billion.

The dream of a Caliphate wasn't broken at the gates of Vienna or with the fall of the Ottoman Empire. It was never real and could never be real, because Arab Islamic civilization had never reached the point where it could run anything that size without a lot of outside help, and could never keep it together without breaking down into infighting because it lacked any political structure besides nepotism and bribery.

Islam has become the magic token, the catchall idea for some higher wisdom that will fix all of the faults of the Muslim world, without its followers having to actually confront social problems and initiate real reforms-- and most of all to break out of their rut and actually advance a few runs up the ladder of civilization. Instead Islam wills them to sink deeper still, to toss aside Western civilization while hanging on to whatever choice bits are useful for Jihad, and to answer all difficult questions with the blade of a sharpened sword.

It is no wonder that this form of bloody magical thinking is most popular in the shadow of the West itself, in the suburbs and ghettos hiding from the light, whose denizens are faced with either trying to be something they're not, or trying to impose their dominance on a civilization, who through the light of faith suddenly appears degenerate and inferior. The Russians made that same choice with Communism, emerging as a horde to plunder the wealthier and more accomplished nations of Eastern Europe. The Germans made that choice with Nazism to demonstrate their superiority by subjugating all their former enemies and neighbors. The Muslim world is making that choice again with Islamism. And by treating their trash as if were the finest gold, we are helping them make it. And covering our own streets with the trash of Islam.
Daniel Greenfield at September 28, 2011
Share