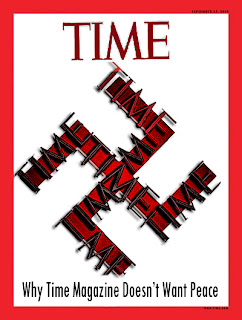 Why Time Magazine Does Not Want Peace
Richard Stengel and Karl Vick
It's that time of the year again. The time where we add up our circulation figures and our ad dollars, and realize that there's no way we're going to be able to pay for a second Switzerland vacation this year. But that's all right, because we're not in it for the money. It's about journalism, fame and having a Constitutionally protected right to lie as much as we want.

Right now we're hanging on to the future by our fingernails. Because in the latest survey we found that the only people who read our magazine either don't know how to use a computer or are sitting in the dentist's office and trying to bury their fear in our infographic about the cast of the Jersey Shore.

We're desperate. I mean we've tried everything. And we've partnered with such leading news organizations as CNN, the Huffington Post, the Onion and AskMen.com, but nothing is working. And somewhere in between such vital stories as the "Top 10 Famous Toilets" and "5 Best Kim Jong Il Hairstyles" (Editor's Note: only one of those is a real Time Magazine story, guess which one. Nope, you guessed wrong) , we have to try and find geopolitical stories that somebody actually cares about, and that we can render in a simplistic fashion for our core audience of people who are just happening to browse at a newstand while waiting for the bus.

And let's face it that subject comes down to Israel. Sure we could try to do a report on the genocide in the Sudan, or the coup in Thailand or the flood in Pakistan; but who's really going to care? Can you imagine anyone picking up a copy of Time Magazine with a cover focusing on the treatment of multiracial children in South Korea? Yeah right. As it is nobody's buying our magazine. If we did that, our sales figures would hit negative numbers.

There are nights when we sit up all night worrying that there might actually be Middle East Peace. And then we'd be screwed. Completely screwed. What would we even write about anymore, except baby racism and how great Obama is? And nobody wants to hear that last one anymore. Sure we can fire the rest of our staff and just have our AutoWriter2000 do the rest of the articles. It's been doing our entertainment and sports coverage for years and nobody has noticed. But you can only save so much money that way. And sooner or later, they'll come out with an AutoEditor and then it's going to be skiing on the Alps, while we're begging the White House for a job. 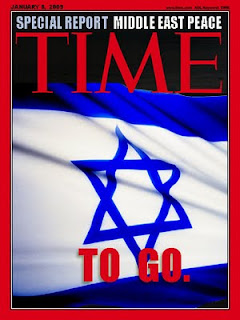 Just last night I asked Joanie, "Honey, do you think there will ever be peace in the Middle East?" And she patted my bald head, and said, "Of course not. If there's ever peace in the Middle East, you'll have to get a real job." And I sighed. I wondered if this is how Goebbels felt. The man had a sweet gig, and then it all fell out from under him over that pesky invading Poland thing. Well we don't want to be the next Goebbels. Sure he got to hang out with the man in charge, and even wear a cool uniform, and he's actually a distant family relation, but where's the career trajectory? We might have made old Adolf, Man of the Year in 1938, but we didn't stick around in the bunker while the Yanks and the Brits were bombing Berlin.

That's what it comes down to. Israel is our meal ticket. Or more precisely, Israel at war is. As long as terrorists are killing Israelis, and Israeli soldiers are killing terrorists-- all we have to do is hire some second rate hack, send him to live in a fancy hotel in Jerusalem, and have him file the occasional on how awful the Israelis are to the poor terrorists. It's gold, I tell you. Gold! Occasionally we'll throw it up on the cover, with some illustration of the Star of David being nasty. Instant controversy. Instant sales. Okay maybe most of the actual sales will be to people who take it to the bathroom in bookstores and then put it back on the rack afterward, but an eyeball is still an eyeball. Even if it in the Borders' men's room.

As long as people know we exist, then we are arguably relevant. We might not be profitable. We might have less words to a page than most boxes of cereal. But we haven't been forgotten. I can't count how many times at a cocktail party, I tell people what I do for a living, and they ask if Time Magazine is still being published. "Yes", I tell them, "Didn't you see our groundbreaking cover story on 'What Animals Think About', or our cover story on energy efficiency which featured a lightbulb wearing a sweater (Editor's Note: Yes both of those are real Time Magazine cover stories). What about our latest piece on Jonathan Franzen? Franzen who? Damn it, he's the author of the most anticipated literary soap opera about suburbanites since Harold Robbins. Never mind, next week it's a cover about how evil Israel is!"

You see how it is. We can get only get by so far on Joe Klein's crazy mumblings and stories about famous toilets or how awful Americans are being to Barack Obama. We need Israel. We need it at war, endangered and bombing something or being bombed. Peace for Israel is of course the last thing we want. The last thing any sane journalist tethered to a dying print media wants.

These are scary times. An era when the old certainties no longer apply. When your old career trajectory doesn't make sense anymore, and you worry that in 5 years you'll be applying as an intern at the Huffington Post or writing ad copy for cereal boxes (which is hard because General Mills, unlike Time Magazine actually fact checks). And during scary times, people lean on the things they've always depended on. They turn to hate, and cling to their MacBook Pros and purple prose. They find a hated minority and lash out at it. Just like my great-granduncle Joseph back in Berlin did. It worked for him. It'll work for Time Magazine too. 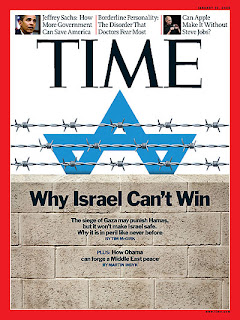 I'm going to tell you something I've never told anyone else. We're frightened little men who long ago crawled into the back pockets of the people we were supposed to be covering. These days we're pushing big government not because we believe in it, but because it's the only force that can stop the internet from smashing our business model, the way Sir Arthur Harris' RAF bombers leveled Berlin. We've carried so much water for Obama that our secret service codename is "Waterboy". We abandoned our ethics, left behind our integrity and now all we have is a determination to vacation in the Alps, twice a year, until our entire profession goes the way of the dinosaur.

With all that in mind, I ask you, can we afford Peace in the Middle East? A thousand times nay, say the hardworking people at Time Magazine, and its associated partners, satellites and coke dealers.

We must stand firm. No peace, today. No peace, ever. At least not until we get a chance to run our Feb 2011 "Israel: The New Apartheid" cover. It has a Star of David with a barbed wire fence across it. Oh did we do that already? We'll run it again anyway. It's not like anybody actually reads our little magazine anyway.
Daniel Greenfield at September 18, 2010
Share