The Making of a Dependent Electorate

Everything the Obama Administration has done, was for the purpose of creating a dependent electorate. A people that would have no choice but let them wield as much power as they want, without a word of protest. 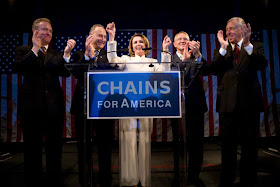 The dependent electorate represents the hijacking of America. It aims for a major power shift that takes power from the people and gives it to the government. Traditionally the people were dependent on the government. The American Experiment reversed the locus of control by making the government dependent on the people instead. This served as a natural hedge against tyranny by devaluing government as a means of controlling the population. And that has been the basic grievance of the progressives against America, that our system makes it possible to monopolize commercial power, but not political power. Yet for all the left's revisionist histories of America... of the two, a monopoly on political power is far more dangerous than commercial monopolies are.

The potential power of government is limited only by its dependencies. The less dependent government is, the more unlimited its power becomes. And the advocates of revising the American system to allow government to wield virtually unlimited power, have always known that their chief obstacle is the Constitutional limitations on the amount of power they can wield and their need to garner support from the electorate in order to be able to overturn them.

An independent electorate is the single biggest threat to the unchecked accumulation of government power. Which is why creating a dependent electorate is the goal of those who want to change the balance of power between the people and their government. There are many methods, but only one goal. Playing divide and conquer by subdividing society into exploitable groups, all taught to look to the government to protect them from each other, is one way. An all out war on economic independence in order to create deprivation and dependency on government social safety nets is another. Both are ways that advocates of unlimited government power cultivate a dependent electorate that looks to them for protection.

The entire debate over amnesty and illegal aliens from Mexico is yet another demonstration of the same principle. Preventing states near the border from cracking down on illegal aliens, makes the existing overdrawn social service systems in those states unsustainable, requiring Federal intervention. Since those states also tend to be more conservative and entrepreneurial, regular amnesty programs can turn those same illegal aliens into US citizens, who will nevertheless be hopelessly dependent on social services programs. Importing a dependent electorate with nothing on their minds but to vote themselves Bread and Circuses is of course a signed blank check for unlimited government power.

Transforming immigration from a way to import a labor force to help maintain a vital economy, into a stream of migrants draining social services and raising taxes on actual workers and companies is symptomatic of an agenda that calls for changing a country based on free enterprise, into one based on government handouts. Unionization and minimum wage laws ensure that there will be a two tier labor economy, one legal and one illegal. But both subsidized by taxpayers. Taxpayers subsidize the illegal labor economy through social services, and the legal one through the inflated salaries of unions.

The absurdity of the situation is highlighted when you realize that the bureaucracy is full of unionized case workers handling the social services of illegal aliens. Taxpayers not only pay for the social services themselves, but they pay the salaries of unionized social services workers too. The legal and the illegal economy meet, shake hands and then gets mugged in the park. But both groups are only cogs in the machine whose final product is a dependent electorate. The ballooning government bureaucracy makes free enterprise into an unworkable proposition. Companies outsource their labor, and keep their corporate offices in the states, while donating money to liberal candidates who ensure that free enterprise in America continues to be unworkable. It's one way to muffle any potential domestic competition before it even gets started.

The breakup of the family is yet another means of maintaining a dependent electorate. Multi-generational families are self-supporting entities, both for moral and practical reasons. Breaking up self-supporting entities that are not dependent on the state is a priority. And when the broken units of the family structure try to function, the state is there to pick up the pieces, acting in loco parentis for the children, and in place of the children for their aging parents. The state becomes the perpetual parent of adult children, and the guardian of their parents, the husband of single mothers and the father of their children. The state becomes the family, which empowers it to become a true nanny state.

In an age where the government is obsessed with what people eat, how much they weigh, what containers they put their trash in and what their carbon footprint is-- Prohibition seems almost nostalgically libertarian by comparison. Children growing up today may find the idea that government could ban all liquor to be strange-- yet they live in a world where the government bans everything from lawn darts to sugary drinks in the name of the public good. The War on Drugs is almost a sideline, to what really should be called, the War on Everything. There are so many federal regulations that it is impossible to keep track of them. And every time congressmen sit down in their chairs, thousands and thousands of them roll off the legislative assembly line, often without the people who are passing them even being aware of it.

But what is the good of power if you don't use it? A system that channels vast amounts of power, attracts huge numbers of camp followers, from aides to lobbyists to activists eager to channel that power in a direction of their choosing. And so you get a vastly powerful government that hardly knows what it's going, because it has become a vehicle for the usurpation of individual rights at the hands of numberless political interests. All this divides a country into two classes, the same two classes that exist under every totalitarian regime, backward tribal society and decaying socialist bureaucracy-- those who have access to power, and those who don't. 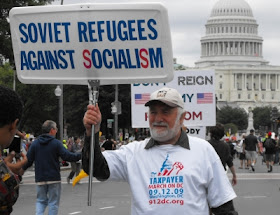 In a system where there is no limit on government, meritocracy becomes a hunted animal, and oligarchy is the king of the beasts. Meritocracy works when the system has objective laws that provide equality for all. But unlimited government power always results in inequality, no matter how much its champions insist that it is a tool for ending inequality. Because power corrupts. And human beings are a corruptible species. Given vast amounts of power, they will use it for their own aims, and those of their friends. The law becomes a joke. When government power is unlimited, free enterprise withers and dies, because the only commodity that matters anymore is access to power.

This is the looting of America. And it is the aim and ambition of those who hide behind noble ideals, which always lead them to the same place, radicalism followed by corruption and dysfunction, followed by tyranny. Tyranny being the logical solution to the chaos created by an attempt to impose an artificial system of social morality on economics as implemented by English Lit and Environmental Science majors. And all they need to reach this point is a dependent electorate, a people willing to give them power, to trade their freedom and independence for economic security.

May we not permit ourselves to become that people ever again.
Daniel Greenfield at September 05, 2010
Share