The Bankruptcy of Barack

Last night Obama delivered a speech about a war that he exploited for political advantage during the election, and ignored the rest of the time. A war that he tried to sabotage as a Senator, and neglected once in the White House. Where Bush conducted constant conferences with commanders in the field, Obama has let the clashing egos of former Clinton Administration staffers, and a few imported radicals, determine how the war will be conducted. Of all the charges leveled at Bush over the war, he could never be accused of just not giving a damn. Yet that is exactly the case with Obama. He just doesn't give a damn. 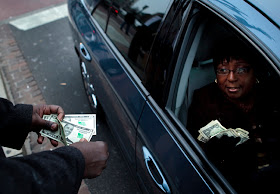 While US soldiers are still dying in Iraq, Obama did his best to take credit for ending combat operations. And used his speech as a opportunity to show off his new Oval Office decor. The level of tone deafness involved in using a wartime speech to show off your new office furnishings, while most Americans are cutting back is completely incomprehensible. It shows a profound contempt for both topic and audience, and a self-involvement that borders on the pathological. It's as if Obama only managed to interrupt his countless rounds of golf and his vacations, just to put on his best sad face and show off his new rug.

Obama has never had much patience for doing the hard work of governing the country. Instead he shuttled from country to country, golf course to golf course, and resort to resort-- while shifting the real work onto congress and his aides, who shifted it onto their aides. What America got was the unlimited power fantasies of immature radicals with no responsibility given flesh in legislation that hardly anyone in the majority party seemed to even bother to read. Meanwhile, having confused his job with that of a King or a Pope, Barry dispensed his wisdom on every random topic from police procedures in Massachusetts to sports picks in the NBA and the NFL. It was as if Obama did not understand that he had won the right to do a very difficult and unpopular job. Instead like the contestant who is picked out of the audience at a game show, he only seemed to understand that he was suddenly very rich and famous.

The Obama Administration hopelessly blurred the lines between Reality television and politics, giving us a self-indulgent child in the Oval Office, who is always eager to pose for photos and be fawned upon, but does not understand that he has responsibilities, rather than unchecked powers. The difference between Barack Obama and Levi Johnston, is not in intelligence or ethics, it's in marketability. Obama was the ultimate marketable candidate. And the equivalent of the economies of some small countries were spent marketing the hell out of him. But how do you market failure? And what do you tell customers when the product they bought turns out to have nothing inside?

When Obama ran for office, his theme was that he had "New Ideas" to offer. Even more than the ubiquitous Hope and Change was the promise of new ideas. These new ideas weren't communicated as such, instead the campaign focused on its social media strategy, its posters and all the other accouterments of its "cool" image. And now toward the beginning of the end of a new year, it is impossible for even Obama supporters to find any actual "New Ideas".

Yet Obama and his media lackeys have decided to again adopt "New Ideas" as their talking point. At the beginning of the month, Obama warned that Republicans "have no new ideas". Always a day late and a trillion bucks short, Biden chimed in last week on message, echoing his boss by warning that the Republicans have no new ideas. This would be a more potent talking point if the public weren't sick and tired of new ideas that put their grandchildren deep into debt while taking away their jobs. And if Obama actually had any new ideas. 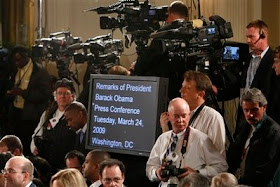 For all the glamor of the new, Obama began his term with an expanded program of bailouts and frenzied spending. This was not a new idea. It was an existing unpopular policy that his administration decided to practice with no fiscal discipline, or even the pretense of actually trying to help the economy. On Iraq and Afghanistan, Obama carried on variations of the Bush Administration's existing approach, but with little to no oversight or interest. Obama's big nationalized healthcare showpiece is a revival of a Clinton Administration policy priority, that is short on new ideas, but long on pork and sweetheart deals for his backers.

There are no new ideas here, just a powergrab as all the rats and cockroaches from previous administrations and NGO's  have scuttled under Obama's skirts to romp in the pantry. Their feeding frenzy has pushed the national debt to unprecedented heights. The economy has been squashed and countless jobs have been lost as possessed by a sense of invulnerability, the left was allowed to wage a ruthless war against the private sector, even while Obama's friends in the business community were allowed to profit from bailouts and stimulus plans that did a lot for Democratic donors, but nothing for the economy.

The hoary corruption of congress met the fresh stench of the administration radicals whose shoulders Obama had ridden on to victory. And together they ravaged and pillaged the country from coast to coast. They took over some companies and spent fortunes on others. They imposed illegal taxes on the public, while turning them into debt slaves for generations to come. They stood up for Muslim terrorists and kicked American patriots in the face. And now at the beginning of the end of the year, they wonder why judgment day has finally come calling. Why the conservative opposition can bring out people in force, while Obama can only trot out his minions in cushy bureaucratic positions and assorted union thugs to try to silence political dissent. But trying to silence political dissent, only gives it more volume.

And his media lackeys who made the transition from anti-government radicals to pro-government radicals with the 2008 election, are denouncing the opposition as anti-government radicals. That puts them in the same position that their opponents were in four years ago. The difference though is that four years ago, conservatives were supporting a government to protect America from terrorists. Today the left is fighting in order to support a corrupt and wasteful regime in order to protect its entitlements. There is no critical issue in their corner. The Obama Administration has fudged the economy and ignored the war. Its domestic policies are wildly unpopular, and its future program, with such highlights as Cap and Trade and Amnesty, might actually be even more unpopular than ObamaCare. And of course there are the Krugmanites still pushing an even more massive spending program that would take the existing tremendous debt, and multiply it without any limit.

And after over a year and a half in office, Obama has learned no wisdom and gained no perspective. He is still the same arrogant, touchy and insecure celebrity that he was in 2008. He has not become ennobled, but embittered. His controlling tendencies have grown out of control. His irritation and paranoia bubble to the surface under strain. Where he promised transparency, he has instead delivered layer upon layer of barriers and secrets, laws that cannot be read, hearings that cannot be attended, and press conferences that never seem to happen. While the people go hungry, he goes on vacation. When speaking about why American soldiers are dying, he shows off his brand new rug.

With the incomprehensible arrogance of the entitled elite, liberals insist that they do not understand why so much of the country hates them now. And when magazines compete to outdo each other with covers highlighting what they believe is the ignorance and bigotry of most Americans, the choir gets preached to, but the congregation has left. Liberals keep reassuring each other of their own wisdom and innate rightness, serving as an echo chamber for their own delusions of superiority, so that when they lose, they can reassure each other that they only lost, because the country wasn't ready for their enlightened leadership. 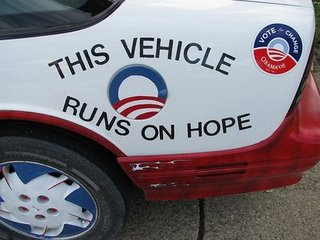 But the country in 2008 actually was ready for new ideas. But what people meant by new ideas, had more to do with removing the obstacles and barriers, the high costs and frustrations of the very brand of government that the Obama Administration has so devotedly championed. Had most Americans understood, that the Obama Administration's policies were a much more severe and irresponsible version of the programs of previous administrations, implemented with no restraint, and practiced with no oversight, 2008 would have produced dramatically different results. But by its actions, the Obama Administration has also brought into being the first widespread and heavily organized opposition to that same brand of government that America has seen in some time.

As Obama takes time out from his busy schedule of playing golf and looting the country to speak to the peasants, his voice has lost the magic power it once had. His image has become ubiquitous and worthless. His rallies go unattended. Because his power always lay in the promises that his followers projected onto him. His magic was the magic of a longing for change. That longing for change is stronger than ever, but it is not to change with him, but to change from him. To change a government that they don't like, for one that actually listens to them. Like his economic policies, Barack is bankrupt. And unlike them, he is the one that will have to pay the bill.
Daniel Greenfield at September 01, 2010
Share