Our allies hate him. Our enemies are laughing at him. Nearly two years after Obama's World Tour in which he did his best to convince voters that he understood global challenges with a high profile tour of a lot of foreign countries (a approach that if it worked should convincingly make every internationally famous rock star a foreign policy expert), his biggest global accomplishment is still his ability to travel around the world to high profile destinations on the taxpayer's shrinking dime. 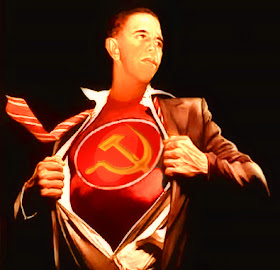 His attempts at diplomacy consisted of delivering vicious slaps across the faces of longtime allies, from England to Israel, and pathetic love notes to tyrants in Iran, Russia and Venezuela, who responded by openly mocking him.

Last week, in a scene almost worthy of the Godfather, Russia decided to stage a coup in Kyrgyzstan at the same time that Obama was signing a nuclear arms reduction treaty with Russia's Medvedev. While Obama was exchanging good wishes with the titular head of the regime backing Iran's destabilization of Iraq and Afghanistan, Russia was recognizing their own coup's takeover, with their newly installed puppet leader, Roza Otunbayeva, a Moscow educated Soviet diplomat and top ranking former member of the Kyrgyz Communist Party.

A few hours later, the second secretary of the Lenin regional council, thanked Russia for its "significant support" in the takeover.

Kyrgyzstan's self-proclaimed interim leader thanked Russia on Thursday for its "significant support" in exposing what she said was the nepotistic and criminal regime of President Kurbanbek Bakiyev. Separately, a senior Russian official said Bakiyev had not fulfilled a promise to close a U.S. base in Kyrgyzstan and Moscow would advise the new government there should be only one military base in the former Soviet state, a Russian one.

Which of course is exactly how it will be. And though Kyrgyzstan may be nothing more than a series of odd letters to Obama, it's home to one of the US bases that serves as part of the shrinking supply line for the Surge in Afghanistan. And Putin has just drawn a knife over one more artery feeding supplies to Allied soldiers on the front lines, while Obama preened and posed for the cameras with Medvedev.

The same Administration which threw a global tantrum over the menace of Israeli houses, had nothing to say of course. Just as it had nothing to say when after that, Hillary Clinton was humiliated by the Russians by being subjected to extensive public tirade. It is of course just one of those things that the media can't be bothered to report when faced with truly important stories, like what Michelle Obama wore on her latest foreign trip. 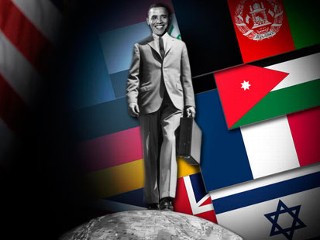 But while most Americans may be deprived of the chance to see Obama's latest screw up in action, just as Russians are treated to stories about radioactive elks or the latest nefarious plots of the Georgians, when something goes wrong on Putin's watch, the rest of the world doesn't live inside that same protective media bubble.

Hardly any American newspaper may be prepared to cover the UK's growing anger at the Obama Administration on the news page, but that doesn't mean it doesn't exist. Not when the one thing that Labor and the Tories can agree on is their frustration and disappointment over the Falklands situation, a crisis that Americans safely enclosed in a bubble of Obamatape also hardly know even exists. Most Russians, before the fall of the USSR, had no idea that their country was bankrupt, losing badly in Afghanistan and was being slapped around by Ronald Reagan. But their ignorance didn't change reality. So too the liberal media's calculated cone of silence on areas that Obama is not prepared to have them explore, does not mean they don't exist and aren't major factors.

The media acts as if it can hardly be expected to notice Prime Minister Gordon Brown joining Israeli PM Netanyahu in ducking Obama's Nuclearapalooza. The growing anger in both countries is just a minor detail. The fact that whoever will be Prime Minister of the United Kingdom next will view Obama as more foe than friend, that too is negligible.

Obama and his people don't see courting Chavez or alienating Brown as a question of what is good for America, but what a proper liberal should do. How this will hurt or benefit America does not enter into the picture, no more so than it enters into the picture when imposing ObamaCare or Cap and Trade does. Because they are not loyal to any country, only to their political ideology which lets them view themselves as citizens of the world. By taking power in America, they do not actually feel any loyalty toward America. They are simply, "Thinking Globally and Acting Locally." The "Locality" in question just happens to be the United States of America. 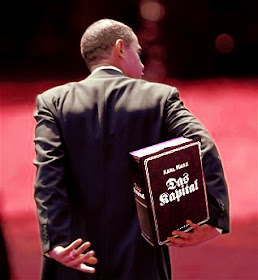 While Putin is thinking of Russia, Obama is busy thinking globally. And that in the lingo of the left means sabotaging working countries and hugging a tyrant every day. Imagine a corporation being taken over by people who hate corporations and decide that instead of making widgets, the corporation should instead confiscate its shareholder's assets and turn itself into a non-profit entity that will give away widgets to the Third World, while convincing its rivals that they must do the same thing. That's the situation we're in now.

Obama isn't practicing diplomacy, because he doesn't even understand what that is. Meanwhile our allies are baffled and angered by an America that seems to be behaving completely irrationally from the perspective of a national government. But makes perfect sense for people who are not representing a country, but an ideology. And the result is an alchemy of enmity in which our enemies now both hate and despise us, while our friends are afraid of what we're becoming.