In the end everything we ever needed to know about Obama could have been gleaned from his two word reply to a Republican Senator who objected to Obama's disastrous economic stimulus plan. "I Won." And of course Obama won the battle and lost the war. The economic stimulus plan passed but was widely considered unpopular and a failure. It played a big part in the public perception of a wasteful government tossing around money with no real results. But Obama is still wedded to the "win". 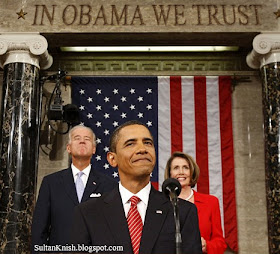 Now as his Democrats prepare to try to illegally ram through an even more unpopular health care bill, achieving a "win" by any means necessary, Obama still doesn't understand that there's no victory for him here. Only different flavors of defeat.

When Obama proclaimed "I Won", he did not mean that he represented a democratic public consensus. He meant that he personally won. It was not about what the people wanted. It was about his own victory by any means necessary. Hardly surprising from the man who began his political career by betraying and destroying his own mentor, climbed into the United States Senate over two sex scandals that were a product of his opposition research, and reached the White House through voter fraud, illegal campaign donations and an owned media corps.

Obama has never succeeded because he represented the public consensus. He got ahead by subverting the consensus. By making sure there was no other choice. By stacking the ballot boxes, using his lawyers to bar his opponents from running and smearing them using Axelrod's underhanded media connections so that they would be forced to drop out. Obama kept on winning. Democracy kept on losing. Each win for Obama was another loss for fair and honest elections. And each time Obama won, it was not because the public decided he was the better man, but because the sheer array of dirty tricks, fraud and media propaganda insured that no choices would be allowed.

That is the way Obama ran his campaigns. That is the way he is now running Washington D.C. Slaughtercare is just the latest and far from the last of his dirty tricks. And if it succeeds, once again democracy will lose and Obama will win. But by disregarding the people as a mass of sheep who can be tricked, lied to or intimidated into voting for him-- Obama is really playing the tyrant's game. His "I Won" is not substantially any different from Hugo Chavez's "I Won" or Mahmoud Ahmadinejad's "I Won". Like his fellow Marxist tyrants in Latin America, Obama counts getting his way as a win. But in reality, like every crook, each of his wins brings him one step closer to his ultimate downfall.

Because you can only get away with it for so long, and each escalation in dirty tricks and illegal actions produces an equal and opposite reaction from the opposition, leaving Obama with a choice between losing at the ballot box, or escalating into a power struggle that will take place outside the ballot box altogether. Slaughtercare demonstrates that Obama will push to get his way, stepping entirely outside the law, just so he can take home another win. But all he is really doing is creating a precedent that will force him to either up the ante or back down. And there are only so many times he can up the ante without making a full transition to Chavezism, thereby moving the power struggle outside the realm of the ballot box entirely, and into that of naked force.

Health Care was Obama's chance to show that he was capable of listening to the people and backing down when the public strongly opposed one of his plans. Instead he decided to score a win by any means he could. Slaughtercare puts Obama on the road to Chavezism. And he will have a great deal of trouble leaving that road, particularly once his congressional majority begins to drastically shrink in the midterm elections. Obama has shown that one congressional setback and the law will not prevent him from forcing his way in anyway. After the midterm elections, the Republicans will neither forget not forgive, and Obama has clearly shown that he will not bow to the public will. And thus Obama's "I Won" takes him on an undemocratic course and into very dangerous territory indeed.

Obama's supporters may pretend that his "I Won" referred to the Republicans. In reality it refers to the American people. Slaughtercare counts as his coup against the people who wanted a more bipartisan congress, and rather than listen to them, Obama instead decided to get his win anyway. Like much of the left, Obama has the attitude of a petulant child who would rather overturn the game board, than concede, learn from his mistakes, and play a better game. Slaughtercare does overturn the game board, but the board is the United States Congress. And there are only so many times he can overturn that board without overturning the board that is the United States of America as well.

For Obama, the United States and its political institutions are nothing more than pawns in another con, in a long series of cons, that a lonely boy used to fit in and succeed among his classmates. For him there is no "Us", only the "I" of himself, and the "Them" of everyone else. And so Obama can play the game, but he places no values on the rules or the integrity of the institutions he is playing with. To dedicated chess players, each piece is part of a game that unlocks a higher level of reasoning and understanding. To an angry boy throwing a tantrum, they are only pieces of plastic, and there is no reason not to move a rook diagonally, or a bishop horizontally. Whatever gets the pieces to the end of the board. Whatever lets him claim, "I Won."


Despite the three elected offices he has held, Barack Hussein Obama has never seen himself as a subset of the rules. He has seen the rules as a subset of himself. From Machiavelli to Alinsky, the common denominator is that the rules are only a means to an end. And the easiest way to win is to exploit and change the rules. But never to fall for the belief that the rules have any value in and of themselves.

So to the left, an election is only valuable as a means to an end, such as enacting a health care bill. But it is only valuable as the shortest and most effective means to reaching that end. If a general strike or a series of bombings or a boycott are more reliably and rapidly effective at producing those same results, then they become the preferred method. Because to the left, political institutions and democracy exist only as vehicles for their own agenda.

And the best sort of champions for that agenda are men who are capable of wearing a thousand masks, without any commitment to them. Men who do not believe in the roles they play. Who only believe in themselves. In their own greatness. In their own will to power. In other words, tyrants. Because the shortest distance between the belief and the end, is the tyrant. For the tyrant embodies the ideal of the left, its unchecked progressivism directed by the superior minds of those who are unafraid to do whatever it takes to the goal. Men to whom government is a means, not an end.

When Obama said, "I Won". He did not mean that he had won the responsibility to direct the public and political consensus within the framework of the United States Constitution. He meant that he had won the power to do as he pleased. The last year has been Obama wielding the power to do as he pleases. And now even as the public is robbing him of his compliant congress, Obama is still determined to wield power as he pleases. And as a result, Barack Hussein Obama's fight is not with the Republican party. It is with the American people. Every victory for Obama is a defeat for the American people. Every victory for the American people is a defeat for Obama.
Daniel Greenfield at March 15, 2010
Share