The Full Measure of Joe Biden's Hypocrisy on Jerusalem 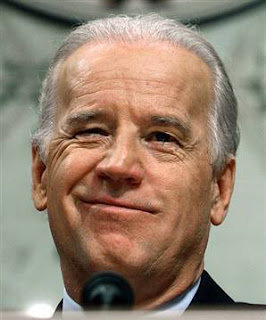 Not that long ago, Joseph Robinette Biden was supposedly gravely insulted by Israel announcing that potential housing to be built in Jerusalem had passed one stage of a multi-stage approval process. Biden was so insulted by this dastardly act that he stood up the Prime Minister of Israel for 90 minutes and that he and various Obama Administration officials proceeded to lambaste Israel for "insulting" Biden.

Hillary Clinton proclaimed; "it was not only an insult to Biden, but an insult to the United States." "There was an affront, it was an insult", huffed Senior Obama advisor David Axelrod. Hundreds of newspapers immediately penned editorials denouncing Israel's grave insult. The essence of it was that Israel had insulted Biden by laying claim to Jerusalem during his visit.

(a) STATEMENT OF THE POLICY OF THE UNITED STATES-

(1) Jerusalem should remain an undivided city in which the rights of every ethnic and religious group are protected;

(2) Jerusalem should be recognized as the capital of the State of Israel;

So if we believe the White House, in 1995 Senator Biden co-sponsored a bill in which he laid out a Statement of the Policy of the United States as that of an "Undivided Jerusalem" that is the undivided capital of the State of Israel. In 2010 that same Biden however was gravely insulted by a potential Israeli housing project in Jerusalem.

But surely that was an accident. After all Biden might not have known what resolution he was actually co-sponsoring. Except that in 1992 Biden also served as co-sponsor of Senate Consecutive Resolution 113. It states that;

Now, therefore, be it Resolved by the Senate (the House of Representatives concurring), That the Congress--

(1) congratulates the residents of Jerusalem and the people of Israel on the twenty-fifth anniversary of the reunification of that historic city;

(2) strongly believes that Jerusalem must remain an undivided city in which the rights of every ethnic and religious group are protected as they have been by Israel during the past twenty-five years; and

(3) calls upon the President and the Secretary of State to issue an unequivocal statement in support of these principles.

Now certainly Senator Biden twice co-sponsored resolutions and bills that proclaimed Jerusalem to be Israel's undivided capital. But he couldn't for the love of god have done it three times? Or could he have.

Whereas ambiguous statements by the Government of the United States concerning the right of Jews to live in all parts of Jerusalem raise concerns in Israel that Jerusalem might one day be redivided and access to religious sites in Jerusalem denied to Israeli citizens; and

Whereas such concerns inhibit and complicate the search for a lasting peace in the region: Now, therefore, be it

Resolved by the Senate (the House of Representatives concurring), That the Congress--

(1) acknowledges that Jerusalem is and should remain the capital of the State of Israel;

(2) strongly believes that Jerusalem must remain an undivided city in which the rights of every ethnic religious group are protected; and

(3) calls upon all parties involved in the search for peace to maintain their strong efforts to bring about negotiations between Israel and Palestinian representatives. 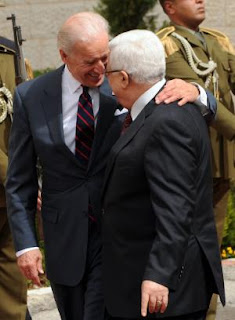 Not just passively supported, but co-sponsored in three Senate resolutions which repeatedly stated that these were meant to be the policy of the United States.

But of course the hypocrisy train doesn't just stop at Joe Biden Station.

Hillary Clinton who claimed that Israeli housing "was not only an insult to Biden, but an insult to the United States", in 2007 (barely 2 and a half years ago) issued a paper stating,

"Hillary Clinton believes that Israel's right to exist in safety as a Jewish state, with defensible borders and an undivided Jerusalem as its capital, secure from violence and terrorism, must never be questioned."

And barely 2.5 years later, Hillary Clinton is vocally doing the questioning. And the woman who not that long ago said that an "Undivided Jerusalem" must never be questioned, was pretending that Israel approving housing in Jerusalem was a grave insult to the United States.

But the "insults" don't stop there. In 2008 Obama gave a speech in which he said, "Jerusalem will remain the capital of Israel, and it must remain undivided." To be fair to Obama, he didn't waste too much time  divorcing himself from the statement he had just made. It actually took him only a day to explain that he actually supported dividing Jerusalem, he just didn't want it divided by barbed wire. No, seriously.

You know, the truth is that this was an example where we had some poor phrasing in the speech. And we immediately tried to correct the interpretation that was given. The point we were simply making was, is that we don’t want barbed wire running through Jerusalem, similar to the way it was prior to the ‘67 war, that it is possible for us to create a Jerusalem that is cohesive and coherent.

After a prolonged study by experts in semantics, it turns out that Obama felt that "Undivided Jerusalem" was subject to all sorts of misinterpretations, such as it being undivided, when he actually meant that it should be cohesive and coherent. Unlike Obama himself. Since no one knows what in the world "cohesive and coherent" might mean as applied to a city, that made it a safe statement to make. 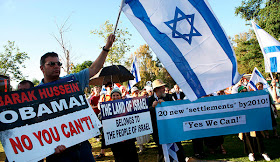 So to sum up, Joe Biden, Hillary Clinton and even Obama were enthusiastic supporters of an "Undivided Jerusalem" not too long ago, but in the spring of 2010 they were gravely insulted because Israel moved housing in Jerusalem to be built on deserted land through one stage of a multi-stage approvals process while Biden happened to be in the country.

Now this dog just won't hunt. Either an "Undivided Jerusalem" is a grave insult to the United States and completely destructive of the peace process... in which case Joe Biden, Hillary Clinton and Obama have all insulted the United States and are destructive of the peace process... or they are completely shameless liars and hypocrites.

Just to close off this sad chapter with one more stop for the Hypocrisy Express at Joe Biden Station, let's tune in to Joe Biden circa 2001.

“Why is it that the one ally we have in that part of the world [Israel], that we have the right to publicly chastise them? We would not do that with any other friend … As much as the Middle East is always on our minds, the best thing we can do is keep it off the US and world press.” He also said that such criticism “emboldens those in the Middle East and around the world who still harbor as their sacred goal the elimination of Israel … It is not for you to tell them [Israel], nor for me, what is in their best interests. We should give them the right to determine what chances they will take”

Fast forward to 2010 where under the guidance of Barack Hussein Obama, Biden staged a very loud and public bashing of Israel.

One is reminded of the question, how can you tell when a politician is lying? Easy, his lips are moving.