Are Politicians Serving Us, or are We Serving Them?

There's a lot of talk about "service" these days from the government, but where public service traditionally meant the government serving the people, today it seems to mean the public serving the government. Serve.gov, rolled out by the Obama administration as part of the "United We Serve" initiative, has as its mission directing everyone into public service, either as an ad hoc community organizer or as a volunteer "on a path to sustained service". The goal being to get the public to do all the things that even Obama's out of control spending budget can't afford to pay anyone to do. 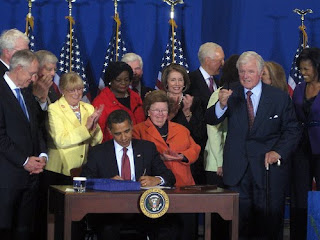 Behind all the cheerful sloganeering though, hides a fundamental shift from a definition of public service that requires politicians to serve the public, to one that requires the public to serve the politicians? The shift can best be summed up as, who is serving whom? With congress giving itself pay raises and Obama using Air Force One for a date in New York all at public expense, while the rest of the country suffers from unemployment and has to squeeze every penny to make ends meet-- it's not too hard to figure out just who is serving whom.

The entire premise of American democracy was built on government as a form of public service from those chosen by the people, replacing one that treated government as an entitlement of special elites ordering around people who were supposedly too stupid or lowborn to run their own lives. That fundamental shift, more than mere popular vote elections, marked the true definition of American democracy. The American people were not ruled by government, instead they ruled it.

But with the rise of the nanny state, we are returning back to the Divine Right of Kings, or rather the Divine Right of Community Organizers to rule by drawing their power from the perceived inability of the public to manage their own affairs. Both Divine Rights assume that the average individual is incompetent to manage his or her own affairs and that only a superior elite is capable of preventing him from getting sick, becoming fat, being a racist, hurting himself by playing with lawn darts or firecrackers or taking non-FDA approved vitamins or any of the other 100,000,001 areas that have quickly become the province of government.

The American Revolution believed that the government which governs least, governs best. The new theory of 20th century American government presumes that the government which governs every detail of your life, governs best. The widening sphere of government control has continued increasing in direct proportion to actual government incompetence. The result has been a drastic decrease in individual liberty accompanied by a drastic increase in government spending. And those pushing the shift have continued to ignore the fact that their locomotive of change is barreling down the same dead road that every Socialist, Marxist and Communist country has gone down already.

The liberal pundits who have been penning articles mocking the Tea Party protests for not representing a true counterculture, which they define based on the incoherent Vietnam War protests, forget that America's original counterculture was the individualistic suspicion of overreaching government that led to the American revolution. The Declaration of Independence's litany of complaints against King George III, include a quite familiar one that most of us can relate to today, "He has erected a multitude of New Offices, and sent hither swarms of Officers to harass our people and eat out their substance." Pretty soon what began with a few radicals, moved up into a middle class which realized that the government intended to drain them of their wealth and trade, and helotize the population. And as had happened so often before, the result was revolution.

The difference was that this time the winners did not hide behind a king, but declared that every man was the king of his own castle. And what was more, they actually meant it. The revolutionary idea at the heart of the American Revolution did not simply lie in national independence, but in individual independence. Unlike the French Revolution, Americans did not trade the rule of one elite for another. Instead they embraced the revolutionary notion that government was nothing more than a way to protect individual freedoms and national security from those who would destroy it, and that this was to be the only legitimate function of government. Should government become inimical to individual freedoms or national security, it would have to be exchanged for another government. Government had ceased to be a master, and become a servant. Holding office was the ultimate form of public service because it no longer meant ruling, but serving. 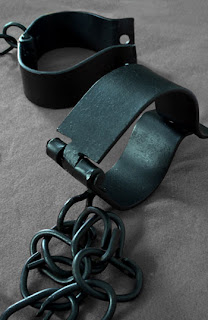 By the 20th century though, the idea of the centrality of the individual had been tossed aside, in favor of a renewed search for some ideal state that would restrain and uplift a degraded citizenry. The spike in immigration in the late 19th century and the end of slavery had whetted the appetite of the social justice crowd for managing the lives of people they considered inferior on a large scale. The Depression gave them their ultimate opportunity, with large masses of Americans dispossessed and looking for help, to usher in the FDR Administration and the first true nationwide implementation of socialism in America. The current economic crisis is meant to be the second coming of FDR with a charismatic leader, relying heavily on direct communications with the public, using an economic crisis to pass government centralization measures on the pretext of fixing the economy.

The problem is that the search for an ideal state sooner or later winds up at the doors of Plato's Republic with government centralization, forcible attempts to eradicate families and classes and a Philosopher-King, or in our case, a Community Organizer-King above it all. That is because all such visions of an ideal state presume that the individual is the problem, and search for ways to control and manage the individual. By contrast the American republic was built on the notion that government was the problem and individual liberty was the solution.

The rise of the nanny state, the recent attacks on capitalism to be climaxed by Michael Moore's latest propaganda film release, proposals to tax individuals without health care or who eat too much sugar, the sudden call of all to national service-- all have one thing in common, they are based on the belief that the individual American is the problem and that government is the solution. As such individual Americans must learn to obey government dictates and serve the public good, as dictated by the government. This system is essentially a bullet in the head of a free America, lighter fluid applied to the Constitution and the destruction of the United States as a strong and prosperous nation as well.

The Great Liberal quest for an ideal state ultimately ends up where all such quests do, with a tyranny of an informed elite dictating the lives of the helots underfoot. The helots who naturally cannot care for themselves, who must be told what to do, how to live, how to think, what to eat and what not to eat, and be cared for from cradle to grave in a vast echoing bureaucracy system funded by their own earnings.

We know what their ideal state looks like today. It is a state that strips away national identity by focusing on diversity, that uses the pretext of social entitlements to continually expand government, that erodes family using sexual communism, absorbs business and industry into elements of the state using a combination of overregulation and rent seeking behavior, and eliminates dissent through social indoctrination, cultural delegitimization and eventually criminalization. The final goal remains the same, an ideal state without any of the old notions to get in the way of progress. In reality it's nothing more than taking the slow train to the Iron Curtain, only to be bushwhacked along the way by the Islamic Horde.

"The New Deal", "The New Frontier", "The Great Society", "Hope and Change", "Ask Not What Your Country Can Do For You, Ask What You Can Do For Your Country", "United We Serve". What they all have in common is a smokescreen for the primary of government in the lives of Americans. A bold and vague slogan hiding the bureaucratic chains lingering just behind it. And over it all the vision of some fantastic Utopian city-state of the future where no one will be unhappy, everyone will have enough to eat and no one will think differently than anyone else. The City of Man.

The ideas are not particularly original. Government can either be a master or a servant. And even as a servant, government remains quite dangerous, because when the masters grow lazy and indolent, and allow the servant to run too much of their lives--- the servant becomes the master. No one put a gun to the head of the average American demanding that he accept high taxes, constant government interference in his life and that they be used to import and subsidize a massive social welfare state and its often imported clients. There was no revolution, no red flags and rifles marching outside his window. It just happened gradually because it was "convenient", and convenience is the worst threat to a republic. The easy way out, the compromise, the short cut that turns out to be much longer than you thought, is how free nations often become tyrannies. 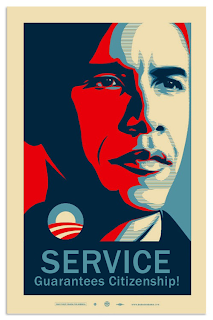 When government stopped being the people we elect and became a system, a great faceless system in whose thrall we all are, from cradle to grave, the collar we thought we had, vanished. Politics became about spending the looted wealth, and in each district, politicians competed to promise everyone their own share of the loot. Individual liberty gave way to a mob fighting over the money that had been looted from their own homes. And so we go on electing our own robbers, in the hopes that they will mostly rob someone else and share some of the wealth with us, leaving us slightly ahead of the game.

You don't have to be a card carrying Marxist to preach the pretense of Wealth Redistribution. You just have to be a politician of either party in Washington D.C., which is primarily dedicated to raising taxes and then parceling them out as pork. The key currency of political power in America has become not the vote, but the tax dollar. And as a result, the politician has become the master, and the public has become the servant. With Obama the transition is now accelerating, as much of his plans require public service projects that it would be easier not to have to pay for. Which is where the public servants come in. No longer are the public servants the men we elect, now we the people are the servants.
Daniel Greenfield at September 20, 2009
Share