Wanted: Men and Women of Courage

Now the hard part comes. We are heading for winter, the time when the summer soldiers fall away and decide that it's easier to live with a King George III or a Barack Obama then to continue a losing fight or be seen as irrational or extremist.

What we were doing was a lot easier in 2002 than it will be in 2009. Back then we were supporting the US government in the War on Terror. Shortly we will be dealing with a US government that is itself pro-terrorist and a public that wants to hear more about massive government giveaways than about the terrorist threat.

Meanwhile Obama's omnipresent cult of personality is already a pervasive reality, but will become more so when he actually occupies the White House. And it takes courage not to fall in line with a pervasive message aggressively broadcast through every channel. Many have already fallen in line or abandoned the fight. Others still have let themselves be herded into a "moderate" cage, moderation naturally being defined by the opposition as toothless opposition toward them and ruthless opposition toward us.

We are about to find out what it was like to be a German in 1930's Germany who knew Nazism was rotten to the core led by a sociopathic clown, or a Russian in Stalin's USSR, a Cuban in Castro's Socialist Paradise or more accurately Venezuelans living under Hugo Chavez, who saw and see arrogant and incompetent dictators rising to power by foul means and spreading their cult of personality far and wide-- who see a society gone mad.

That is not to say that opposing Obama at this point will mean a knock on the door and a trip to a basement at the local office of the internal security services. We are not at that stage. But rejecting the cult of personality around Obama means rejecting the dominant cultural paradigm, and it takes a strong mind to do that.

Numerous psychological experiments have shown how easily people can be pressured and swayed into doing everything from performing shock torture to giving answers they know to be wrong when they see that everyone else gives the wrong answer.

That is courage. Courage is not simply rushing into a fire, it is also defying convention and conformity. One man with courage makes a majority, because courage rests in holding to ideals rather than bowing to the majority. And that is what we need. Men and women with the courage to go on defying conformity and speak out for what is right. 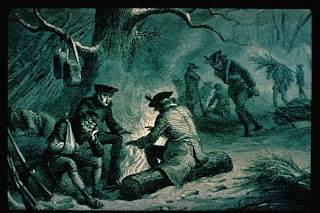 It was easy to be an Anti-Jihad blogger in 2002. It will be increasingly hard in 2009. It will take courage and it will take integrity. It will take sticking to what's right, despite silencing voices from all sides.

The weak minded are already falling away, penning congratulations and defenses of Obama. Others will give in to overt intimidation and peer pressure. But those who go on standing through the refining process will define the political resistance to the Obama Junta reading itself to seize control of America.
Daniel Greenfield at November 26, 2008
Share