Israel's Treason to the Living for the Dead

This week the leaders of the State of Israel have committed an act of treason. Treason to the living, fealty to the dead. By trading terrorists for bodies, the appeasement of this government has reached a new depth of sheer degradation. Through this trade Israel has not only emboldened terrorists to seek and kidnap hostages-- but has demonstrated to the terrorists that they need not even keep those hostages alive-- because Israel will pay the same price for the dead as for the living.

This horror is the ultimate degradation of life in favor of death. The exchange of the lives of the living for the dead. The lives of the soldiers and civilians who will die because of this crime. The lives that will be taken by the murderers who have been freed. It is nothing more and nothing less than the elevation of death over life.

It's easy enough to remember the dead. It takes no special courage to hold a memorial service and lower a body into the ground, to light a candle, to say a prayer and a farewell. It is painful but a part of escaping pain. What we put into the ground gives us closure, the illusion of escape. We bury our pain and walk away.

Thus we remember the dead and forget the living. Memorials are a way to deal with our pain, but pain must not be put away, it must become the fire that stokes us to changing the world. Some things we cannot change. Death is still final. But murder we can change, we can prevent and we can avenge.

This week Israel turned over living murderers in exchange for dead bodies. Funerals, flowers, flames will be lit. And we will mourn. Again. Again for the dead. And again we shall forget our obligations to the living in our tears.

Mourning can be a relief. a way to release the pain. But it is also dishonest to mourn what you can prevent. It is evil to lavish self-indulgent tears for the dead in exchange for defaulting on our obligations to the living. Every nation has memorials to the dead. Great nations do not keep their duty entombed in granite, they wield it as living flesh against the foes of their people.

When oratory over graves does not give way to the thunderhead of righteous anger, when the lighting of arms is held back while men weep over wounds of earth, then that nation and that people embrace the grave over their duty to their brothers and sisters, and to themselves and their nation.

We have grown sated with weeping, with endless tears and endless funerals. We have grown weary of governments that remember the demos of the dead, over the polis of the living. Hold no more funerals and light no more candles. Only those leaders who would hunt down the killers of the dead are worthy of mourning them. Only those leaders who show courage in life are worthy of mourning the courageous dead.

Life is filled with pain and death that will not cease till the mountains are overturned and a horn is blown again in Zion and men ride to war against the horde. It is well to mourn those who are gone, but it is more important to do for those who are still here. The duty of nations is not to the dead, honored though they may be, but to the living. For the dead care not, but the living still breathe and bleed. The dead do not hold the future of the nation, only its past heritage. It is the living on whose backs the nation will either falter or hold. 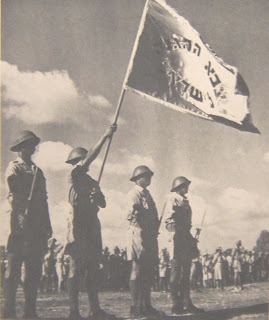 Leaders who cannot defend the living, are unworthy of the sacrifices of the dead and unworthy of the posts they hold. Don't tell us to mourn, to seek closure among the dead. Our closure is to be found among the living, it is to be found in defending that which the dead fell to protect. Our nations. Our peoples. Our homes and our brethren. Trade no more coffins for the living. The only trade of war that makes or unmakes nations-- is to trade the corpses of the enemy, returning free of charge their bodies, for the living future of the state won through the destruction of the foe.
Daniel Greenfield at July 16, 2008
Share