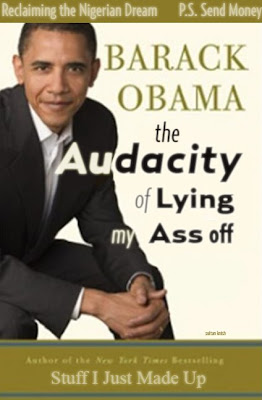 It was the spring of '43, 1843 and in every American home there was talk of only one thing, the war. Everyone knew that the war was a mistake. FDR had lied to the American people, word on the street was that he had known about Pearl Harbor before it had even happened. Some said that there had been no Japanese planes, only explosives planted on the ships and wired to explode. The rest was faked in a Jewish Hollywood movie studio.

But none of that mattered, we were in the war and every day tens of thousands of young men from Kansas were coming home burned to death. As the son of a housewife from Kansas and a serial philanderer from Kenya, I naturally tried to do what I could to bring my audacity of hope to them.

Every day I would go out and meet and talk with many of the fallen heroes who were returning home to an America that was poorer and had fewer jobs to offer them. An America that was racially divided and in which the OSS had been given greater powers than ever to spy on the lives of ordinary law abiding Bund members.

As a quarter black, half-swede, two thirds Japanese young man still wrestling with questions of identity and doing my best to follow in the footsteps of my grandfather who had singlehandedly won the Civil War for three straight years running-- I knew it was only a matter of time before I was called on to enlist and serve in this unjust and immoral war.

The telegram came and immediately I discarded the last of my cocaine by flushing it down the toilet, donned my dress uniform and reported for duty at Hawaii's Edwards Air Force base just adjacent to Cape Canaveral where the President and his staff were hiding inside Iron Mountain hoping for a miracle. I was to be their miracle.

I met FDR inside a deserted airplane hangar. He was smoking a pipe and sitting in his trademark wheelchair. Besides him was Winston Churchill, old, fat and racist. On his left was Joseph Stalin who had been my godfather.

"Barack," FDR said, "I'll get straight to the point. We want to integrate the army and you're a one man integrated army already. That's why we're sending you to Auschwitz to blow up the oil wells and assassinate Hitler. Or maybe it's Buchenwald or Berlin. Hell who can remember these things."

"Sir," I replied, "despite the fact that I hate and despise this racist country for the crimes of the past, I will volunteer to selflessly and patriotically serve this bigoted white nation. But in the meantime what's in it for me?"

"There's word there might be Jews there and they're a crucial demographic," Churchill said.

"Can I win Florida without them?" I asked.

"Probably not," FDR admitted. "And you can forget about Alaska."

"Alright but for my sixth grade Jewish camp counselor who inspired a love in me for not killing Jews, I'll do it," I told him. "I've got my Leon Uris volumes packed already. But I want two things. I don't want to wear a flag pin and I demand the right to choose my own squadron."

They gave it to me plus all the cocaine that would fit up my deviated septum.


Choosing the men who would accompany me to Oslo to assassinate Mussolini was going to be tough. We called ourselves the B-Team.

First up was Navy Commander John Kerry who had once conquered all of Cambodia before giving it back to the Cambodians when he realized his mistake. He had a suit of armor made entirely of band aids and Purple Hearts and he frightened small children whenever he walked down the street.

Second I chose Jeremiah Wright, a Marine who was more feared by his fellow troops than by the enemy, because he always pointed his rifle backward while pulling the trigger and was constantly tossing live grenades into our tents as a joke.

Thirdly I brought Obama Girl, even though she didn't know how to shoot and someone else had to do her shooting for her.

Finally I chose Sergeant Rock, a man of unimpeachable credentials, all the more because like me he was an entirely fictional character who didn't actually exist.


We parachuted into Rome that evening and tried to blend in and look Italian. Using my wide knowledge of languages from my extensive travel experiences, I approached one of their Gendarmes and inquired, "Salaam Aleikum? Inshallah, Wohin is le kontracienon kampen?"

After several glasses of wine, he gave us directions along the coast of Norway. Norway in those days of course was populated solely by Reindeer and atomic mutants. I brought my knife. Jeremiah Wright brought his sermons. Obama Girl said she was busy and couldn't make it. Sergeant Rock was a fictional character and the Reverend John Kerry opened a War Crimes tribunal to judge us all for our crimes against humanity.

We traveled for days and nights through the whiteness of the Alps, which caused me to ponder long and hard on the nature of racial identity. On the way there we met Hitler and negotiated with him without preconditions and I agreed to surrender America.

After that I came home shellshocked and spent 300 days sitting in an attic, snorting FDR's cocaine and writing my biography. I still haven't seen a concentration camp yet.