Goliath's Challenge - Islam and the World 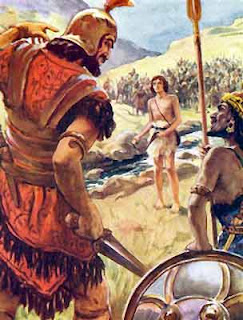 And there went out a champion from the camp of the Philistines, named Goliath, of Gath, whose height was six cubits and a span. And he had a helmet of brass upon his head, and he was clad with a coat of mail; and the weight of the coat was five thousand shekels of brass. And he had greaves of brass upon his legs, and a javelin of brass between his shoulders. And the shaft of his spear was like a weaver's beam; and his spear's head weighed six hundred shekels of iron; and his shield-bearer went before him

And he stood and cried unto the armies of Israel, and said unto them: 'Why do ye come out to set your battle in array? am not I a Philistine, and ye servants to Saul? choose you a man for you, and let him come down to me. If he be able to fight with me, and kill me, then will we be your servants; but if I prevail against him, and kill him, then shall ye be our servants, and serve us.' And the Philistine said: 'I do taunt the armies of Israel this day; give me a man, that we may fight together.'

And when Saul and all Israel heard those words of the Philistine, they were dismayed, and greatly afraid. - Samuel 17

Today Islam has come out like Goliath and openly taunts the world. It has set up its mosques in every city where its Imams preach the murder of infidels and the conquest of the world. Bombs go off from city to city and Muslim countries fund Muslim ethnic separatists from China to the Thailand to the Philippines to Israel to France and all across the globe. While its spokesmen smirk and talk of peace, the forces of Islam repeatedly march out and challenge the world to a fight and the world as one is dismayed and tries to apologize for their sins.

Give me a man to fight together, the modern day Goliath demands. And instead we send aid. We send armies to bring him democracy. We try to teach him right from wrong and give him his own industry and constitution as if he was some feral child we were attempting to elevate to civilized status. And all we accomplish through this futility is to show our cowardice in his eyes.

When we ask him, why he hates us, he laughs and pours out his grievances for he knows we have already surrendered to him. Instead of fighting him, we are trying to reason with him. All the reasoning accomplishes is to work out the gradual terms of our surrender. When someone comes to destroy you and your society and your way of life, you can either fight back and break his strength or you can delay and delay and look for more reasonable alternatives. But there are none.

For forty years Goliath stood and presented himself to Israel calling for a challenger. For more than 40 years, Arab and Muslim terrorists have hijacked planes, murdered hostages, seized embassies, assassinated and bombed and slaughtered and raped and occupied. Even now France continues to burn from its Muslim occupiers and in England, the Muslim occupiers proclaim their intent to retake Spain and then all of Europe in a wave of bloodshed. And the authorities are dismayed but do nothing useful. They do not go out to fight.

The first obligation of a government, of any government is to protect its citizens. When it fails to do this, it has lost all its legitimacy and its right to govern. Saul, who had turned back from utterly destroying Amalek, lost his right to rule and the kingdom was taken from him and was given to David, who answered Goliath's challenge when none of Saul's men would. In the end Saul who chose to fight David was himself was slain by the Philistines whom he would not fight and David inherited his place.

In Israel the authorities that are persecuting the settlers and the true Zionists in Israel would still rather fight Jews than fight the modern day Philistines and though they may hang on to power every bit as ruthlessly and desperately as Saul, their reign is as doomed as Saul's and they will ultimately meet his fate.

In America the authorities spend more time fighting Islamophobia than fighting Islam. After 9/11 more people were arrested for "hate crimes" against Muslims, than Muslims were arrested, after the Islamic massacre of thousands of Americans. Today the government spends more effort fighting advocates of enforcing the laws against illegal immigration than fighting illegal immigration. Time and time again Islam and America's enemies from Russia to Iran have declared war on America and murdered Americans and the response has been more diplomatic efforts. Ahmadinejad regularly taunts the West and the West stands dismayed.

Goliath does not go away if you do not meet Goliath's challenge. He only grows stronger and more arrogant. He invades your cities. He loots your homes. He rapes your women. He enslaves your children and takes them for his own. He becomes your government and in time you bow down to him.

Does this sound like something ancient and out of touch with modern day realities? Go back to 1919 and 1939 or 1992. Take a walk across modern day Africa and Southeast Asia. And now take a look at Europe and then look back at what was once Constantinople and understand that one day Sweden and Norway and France and Italy and England will look that way too.

There is no trick to defeating Goliath but one. To go out and fight him. To stand up and do your best to kill him, knowing that if you do not, he will kill you.

When the Arab armies prepared to fall on Israel in 1967, Israel struck first and delivered a devastating defeat. When in 1973, Israel allowed the Nixon Administration to tie its hands behind its back, the Arabs struck first and Israel was nearly annihilated.

In 1941, the United States waited for the war to come to it and the result was a string of defeats across the Pacific and terrible death before the balance of the war could be turned. In Europe, England and France which had waited for Germany to make the first move, faced conquest and massive bombardment. In Europe, the United States struck first and rolled across German positions all the way into Berlin.

You cannot win a war if you do not fight it but you can lose one. When Goliath makes his challenge, you either fight back or you give in. Today Islam challenges the world and rolls across its enemies, leaving conquered populations in its wake. The champions of the enemy demand a fight. It is past time to give them one.
Daniel Greenfield at June 18, 2007
Share