Egypt is never going to get any better. And that's the good news. If your job involves waiting for some outbreak of Arab Spring to fix the country or the region, you can give up now. 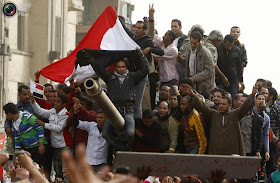 Or you can do what most government employees already do and phone it in. Master Sudoku. Learn to knit. Figure out how they get those ships into those bottles. And in between those things write up encouraging and hopeful things about the latest revolution.

Sure Egypt does have a lot of people willing to risk their lives by protesting for a form change that's more open than burkas. Some of those people are even okay. They're also the minority.

Democracy in Egypt and Turkey rewarded the lowest common denominator voter. The type of voter who gets all his ideas from his Islamist cable television channel that he watches in between working some menial job in Cairo or Istanbul while being grateful to be living in a grungy stretch of a city, instead of trying to scrounge a living in what passes for rural areas.

Egypt's revolution involved two sets of Western educated elites tugging at a poor post-feudal population that wants cheap bread and some kind of stability, but is filled with simmering anger over a multitude of things.

The first set of Western educated elites are the liberal protesters who take in stunning amounts of American and European pop culture, work for Western tech companies and banks and come from the upper classes. They look and sound a lot like Americans, except that the ability to look and sound like Americans outside the United States is an upper class signifier.

The American twenty-something who checks his Facebook status on his iPhone and has some variably useful degree is likely to be an accident of the middle class. His Third World counterpart usually has wealthy or influential parents. What looks ordinary to Americans is actually upper class in a part of the world where most people are poor.

The second set of Western educated elites are the Islamists, who lack the same pop culture grounding, though even Morsi was able to reference Planet of the Apes in a Time Magazine interview (It's unknown if he's holed up somewhere now screaming, "You maniacs, you blew it up) from his days studying in the United States.

The Brotherhood may be out to drag Egypt and every other place they take over back to the 7th century, but they are also led by the wealthy and the well educated. There's a reason why the operatives of the Muslim Brotherhood are moving smoothly up the ladder in the United States instead of living in grimy apartments in Jersey City and plotting to blow up bridges and tunnels like their Islamic Group comrades. If they're Sonny Corleone, the Brotherhood is Michael Corleone. 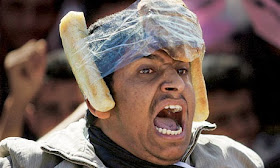 Strip away the ideology and there are two sets of technocrats, both running on muddled Western ideas that never actually worked in the West. The Brotherhood pieced together an ideology out of the Koran and Mein Kampf. Their liberal opponents tend toward the same bankrupt Socialism that translate into massive bureaucracies. And the military which played the arbiter in their power struggles only cares about hanging on to its economic monopolies.

Don't think of what's going on in Egypt as some grand ideological struggle. It is, but it also isn't. Think of it as three mob families, oligarchies where economic and clan interests overlap, fighting over the scrap heap of the Egyptian economy. The prizes are economic monopolies over everything from cigarettes to soap. And if that doesn't seem very romantic, in Syria the rebels are fighting over control of the country's most vital resource; bakeries.

The Egyptian military used to have big ideas. Those big ideas led to the end of the monarchy and the posturings of Nasser who spent more time looking at himself in the mirror than planning his futile wars and economic programs. Then came pragmatists like Sadat and Mubarak who were less interested in playing some cheap Hitlers presiding over a banana republic and chose stability instead.

Sadat and Mubarak chose to ally with the United States not because they believed in any common values, but because they were ready to settle down to running a backward country that might be mostly poor and ignorant, but is also reasonably stable and is able to count on American support. That plan came apart when Obama came into office and Sadat's killers became the future of Egypt.

The Egyptian military is mostly apolitical these days. And it is willing to play the two politicals, the two sets of technocratic elites, the liberals and the Islamists, against each other. Unlike the Turkish military, it's not here to be the guardian of secularism. Like the rest of Egypt, its military is a little bit Islamist and a lot corrupt. It puts family connections and personal profits first and then pays lip service to the Koran of the Islamists and the social justice of the liberals.

The United States has invested a whole lot of money into building up an Egyptian military that is never meant to be used. But a giant army doesn't just sit there. If it is denied an enemy to fight, then it becomes a domestic political institution.

Regionally large armies unrestrained by a stable government or a powerful dictator become the government. The Egyptian military has been the government in one form or another for generations. Its officers have run the country. Did anyone really think that was going to change because there was an election?

Nixon refrained from challenging JFK's dubious victory and Gore didn't push too hard over Florida. There's a tradition of that sort of thing in American politics where fraud is considered less of a threat than an attack on the legitimacy of the process. It's one of the reasons why we still haven't descended into mob rule and military governments. Even if those might be an improvement at this point.

Democracy was never going to work in Egypt because the players were substantially too far apart. And neither were invested in democracy. Democracy in Egypt was like the awkward press conference that boxers have before a match. They're not very good at it and they're just trying to get it over with so they can beat each other senseless. No one liked the idea of living within a system in which the lower classes would decide your political fate. What they liked was the idea that the system would declare them the only true rulers of the country for all time.

Dedicated Arab Springers are telling us that reform and political change don't happen overnight. That's true. But they're not going to happen in Egypt any time soon. Egypt isn't getting any better. And why should it when the United States isn't getting any better. A look around the world shows few examples of improving political cultures. Why should Egypt be the exception?

Anything can happen in Egypt tomorrow.Total totalitarian Islamist rule. A state of permanent anarchy. A military dictatorship. Rule by Egypt's endless professional guilds. Or all of the above on a rotating weekly basis.

It doesn't really matter one way or another from our perspective as long as none of the Islamist ideologies that are a little too eager to kill us get their hands on all the military equipment we keep shipping Egypt for a war that isn't supposed to happen. Everything else isn't our problem. 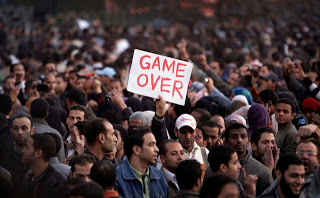 Washington is full of senators demanding that Egypt transition back to a democracy as soon as possible with a new election. Egypt can have a new election. It can have a dozen of them. But you have to be a fool to think that waving the magic cargo cult totem of democracy  will fix anything. Zero sum gamesmanship is incompatible with democracy and a culture where everyone assumes that everything is rigged (and they're probably right) is never going to accept the outcome of the ballot box.

Progress isn't coming to Egypt any time soon. Its political system isn't broken because there aren't enough voting booths, but because its culture is broken. Injecting democracy into a broken culture is like throwing cash at a drug addict. All you're doing is giving him another way to kill himself.