The Extremist Moderates and the Moderate Extremists

Like a band that only knows one song, politicians only know one response to Islamic terrorism. They wall off that vast majority of Muslims who did not actually come down to Woolwich and hack at a soldier with a machete and did not fly two planes into the World Trade Center from those who actually did those things using action and inaction as the defining line between the extremists and the moderates. The couch potatoes watching at home and cheering them on are moderates.

That might be fine if we were discussing an individual crime, like a gas station robbery in Cleveland. But Islamic terrorism isn’t like that. To Muslims, Jihad isn’t an act of violence; it’s an act of faith.

Islamic terrorism isn’t a crime. It’s a form of religious warfare that goes back all the way to its founding. Islam sanctifies crime and violence and elevates them to acts of worship and that is why its acts of terror cannot and do not occur in isolation. It is never the act of a single madman, because its intents and ambitions are communal.

When a Muslim kills a Non-Muslim for the religious reasons of Jihad, whether he is a lone wolf or a member of a large cell, the act cannot be divorced from its goals for the larger Islamic community. No Muslim terrorist is an island. His terrorism is a communal activity that takes place within the context of an Islamic manifest destiny. He does not kill for himself. He takes the lives of others and offers his own life in the name of a historical idea of theocracy and supremacy.

The distinction between action and inaction is meaningless. It’s the distinctions between active support, passive support and direct opposition that matter. Those Muslims who support both the ends and the means of Muslim terrorism are active supporters. Those who support the ends of Islamic theocracy, but not the means of Islamic terrorism, can be labeled passive supporters. And the tiny minority of secular extremists who oppose both the ends and the means are the direct opposition.

The majority of Muslims can at best be described as moderate extremists, while a tiny minority can be complimented for being extremist moderates. And the existence of that minority is often as hard to verify as the presence of Bigfoot in the Pine Barrens of New Jersey. Some people claim to have seen one, but the sightings never amount to anything tangible.

After September 11, National Geographic interviewed a moderate “Islamic scholar” for his response to the attacks. “No religion would condone this,” he said, “Islam does not approve of this. There is no way that the people who did this could be Muslim, and if they claim to be Muslim, then they have perverted their religion.”

The scholar was Anwar Al-Awlaki, who had ties to the 9/11 hijackers and was an Al Qaeda leader.

Even if applying the term “moderate” to any mainstream Muslim leader ever made any sense, it became meaningless once the ranks of moderates grew to include the Muslim Brotherhood, Anwar Al-Awlaki and any Muslim who was not at the moment engaged in chopping off someone’s head. And once he was done sawing away and washed his hands of the blood, then he too could be considered a moderate.

Of the two Muslim countries most frequently presented as moderate examples, Turkey and Indonesia, both have committed genocide against non-Muslim minorities in the last hundred years.

There is no actual standard for what makes a Muslim group moderate. The sobriquet is a form of approval granted by Western elites to Muslim groups and figures that most people would conventionally associate with terrorism. 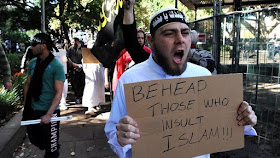 Muslims that might conceivably be described as moderate rarely are. It would be redundant to do so. It’s invariably Muslims with a long record of public statements in support of terrorism and associations with terrorist groups that are described that way. When a Muslim figure is described as moderate, it’s meant to be an alibi. You might think him extreme, but the media has preemptively stepped in and labeled him a moderate. That’s how it worked for Anwar Al-Awlaki. That’s how it still works for the Muslim Brotherhood.

If a Muslim group can be both terrorist and genocidal and still be labeled “moderate”, then moderation has no meaning. When the New York Times and the Washington Post describe the Muslim Brotherhood as moderate, it’s no different than telling the police that your cousin was with you all night when he was actually carrying out a series of gruesome murders. It’s not a supportable claim; it’s an alibi that doesn’t hold up under even the slightest scrutiny.

That precariousness is why Western elites unleash such an astonishing volume of vitriol against anyone who challenges the moderate alibi.

Muslim and Western leaders both describe Muslim groups that they support as moderates and those that they oppose as extremists. These groups are never moderate because their basis for supporting them is the perception that these groups are forging a path that is on the right side of history.

To Muslims, that means groups like the Muslim Brotherhood that use Western knowledge as a means of Islamizing their societies. To Westerners, that means Islamic reformers who will embrace democracy and fight corruption while being able to hold a dialogue with their diplomats and reporters. And in the Arab Spring, American and European leaders agreed that the Muslim Brotherhood was the one.

Whether in Egypt or in London, there is no requirement that these moderate groups actually stop supporting acts of terror, only that they stop embarrassing the Western politicians and journalists providing them with an alibi by actually carrying them out. For Western elites, Islamic acts of terror are not an outrage, but an inconvenience, that upsets the public and makes it harder to push forward on the larger agenda of integrating the Muslim world into the modern world through immigration and democratization.

Moderation refers to a seeming willingness to get with the program. Anwar Al-Awlaki was considered moderate because he was willing to stand in front of the cameras and say the right things after September 11, even though he was involved in the attacks of September 11. 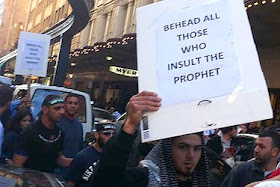 The Muslim Brotherhood is similarly considered moderate because it’s willing to say the right things, even while its thugs burn down churches and terrorize the opposition. It’s not the violence that matters, but the willingness to put in a good appearance at UN, WTO and IMF events, to fall in with all the trends and to maintain the farce that is the international community and international law.

The moderate Muslim prized by Western elites is not an opponent of violence. If that were the qualification then many of the Western elites, who support and supported all sorts of leftist terrorists, wouldn’t qualify. It’s a willingness to join the club and maintain the illusion that a united world under international law is possible.

A month after September 11, the New York Times described Anwar Al-Awlaki as “a new generation of Muslim leader capable of merging East and West”. That is the soulless calculation behind the moderate brand. It isn’t given to those Muslims who eschew violence, but to those Muslims who support the union of east and west. And they don’t look too closely at the fine print to determine whether this united world will run under international law or the manifest destiny of Islam.
Daniel Greenfield at June 01, 2013
Share