How does one define a nation? That is truly the fundamental question of amnesty.

The libertarian argument in favor of amnesty comes down to the question of whether nations even necessary at all. If the only characteristic that matters is freedom then borders and the other vestiges of nationhood only interfere with the flow of the free market. 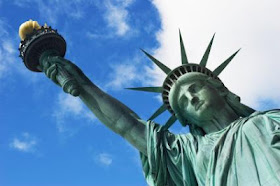 America then becomes a set of ideas and its only usefulness is as a space for harboring those ideas. This ideological definition of a nation demands that it sacrifice its survival to its ideas.

This notion is found most strongly among liberals for whom the actual physical survival of the country ranks a distant second to its duty to live up to its ideals. That is why liberals can argue that torture is wrong even in a ticking nuclear bomb scenario.

In the real world countries don't do well as vehicles for ideology. A country is a practical entity that encompasses the real life needs and challenges of people, while an ideology tends toward rigid self-righteous fantasies. Countries need ideologies to define them, but becoming prisoners to rigid ideological ideals can destroy them.

Any ideology whose logic is followed to its final conclusion leads to a horrifying and unlivable society.

The logic of libertarian amnesty would fill the voting rolls full of supporters of big government and the welfare state in the name of economic freedom. It's not the worst illustration of how ideologies commit suicide through following the siren song of their logic to the farthest north. It's not even the worst such example involving immigration. That honor belongs to the European left whose immigration policies have doomed the survival of every value it claims to care for. But it is typical of the destruction wrought by dismissing people and their nations as interchangeable cogs in a machine of ideas.

The multicultural left is not entirely wrong about cultural relativism; it is only wrong in assuming that its existence demonstrates the lack of any absolute values or truths.

To a tribal society, America is a land forever in contention and American leaders are mere tyrants who represent no one. In a tribal society where legitimacy stems from family, the President of the United States is no more than a bandit with a large army and a heap of weapons. Not only does he have no tribe, but he boasts of his confusing tribelessness in his books, at times pretending to be a member of different tribes.

America is a power to tribals, not a tribe. An empire that fills its land with tribes and imagines that it can rule over them. A land in which their tribe may rise supreme.

What happens when an identity based on economic regulation or deregulation meets one based on family? The expansion of the welfare state is only one of the minor consequences of this collision. Democrats and Republicans have come to think of themselves as regulators and deregulators, but for all the flowery prose that gets trotted out at conventions, this is less an identity than an engineering philosophy of government that has little meaning to tribals who view government as either "mine" or "yours", as a source of patronage, money and power to their tribe or to their rivals.